Rep. Rashida Tlaib will not visit Israel after country reverses course to grant her entry 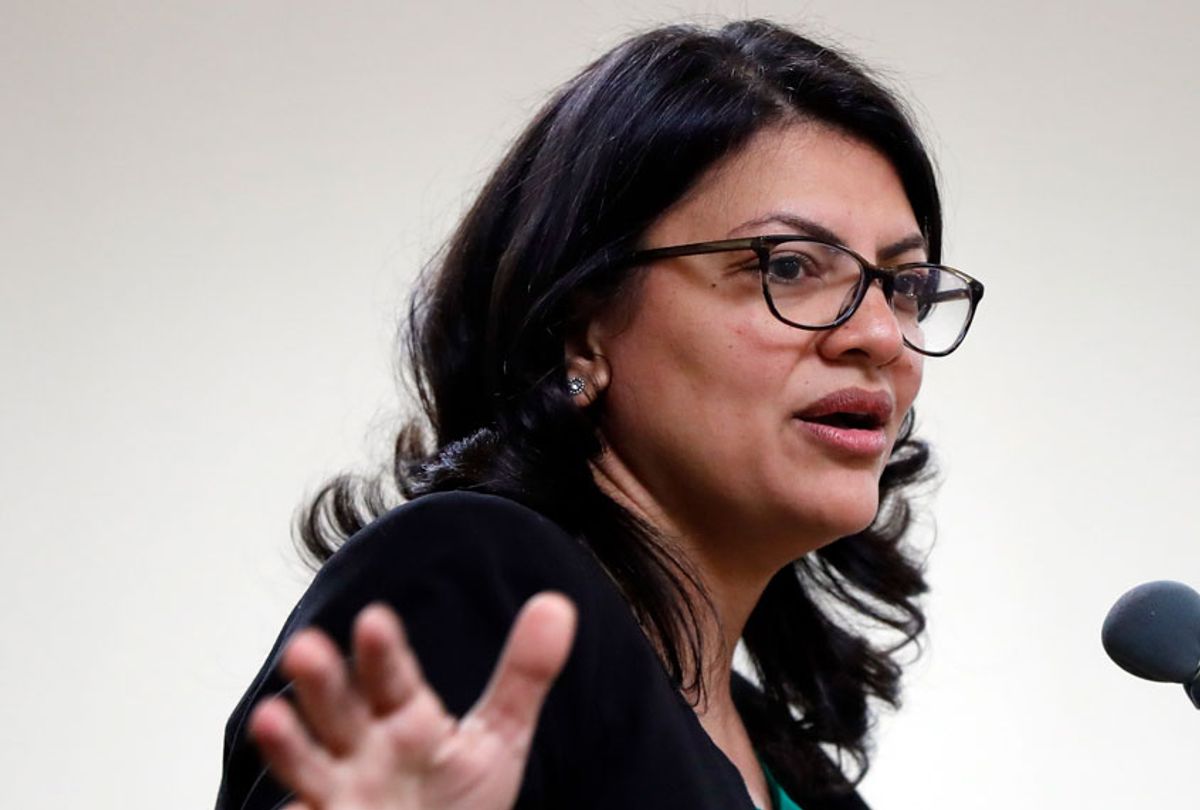 Rep. Rashida Tlaib, D-Mich., announced Friday that she will not travel to Israel after the Israeli government reversed an earlier decision to bar her from entry and granted her permission to visit her aging grandmother, who lives in the occupied West Bank.

"Last night, she sent me a letter asking to allow her to visit her 90-year-old grandmother, 'because this could be my last chance to meet her,'" Deri said. "I approved it for humanitarian reason, but it turns out that it was a provocation to embarrass Israel. Her hatred for Israel overcomes her love for her grandmother."

In her letter to Deri, Tlaib asked to be allowed to visit Israel "in order to visit my relatives, especially my grandmother who is in her 90s," adding that it "would be my last opportunity to see her." She vowed to "respect any restrictions" and to "not promote boycotts against Israel" during her visit.

In the end, Tlaib said she would not visit Israel after all.

"In my attempt to visit Palestine, I've experienced the same racist treatment that many Palestinian-Americans endure when encountering the Israeli government," she said in a statement.

Tlaib, whose parents are Palestinian immigrants to the U.S. and who has close relatives in the West Bank, had planned to travel to Israel on Sunday with Rep. Ilhan Omar, D-Minn., on a trip focused on viewing the impact of recent U.S. policies and aid cuts on Palestinians living under Israeli occupation.

The pair were banned from visiting the country after President Donald Trump said Thursday that Israeli Prime Minister Benjamin Netanyahu would "show great weakness" if he allowed the congresswomen, who he claimed  "hate Israel & all Jewish people," to enter the country.

It remains unclear if Israel has changed its position on Omar, a Somali-born American.

Earlier on Thursday, Netanyahu said in a statement the trip sought to "harm Israel and increase its unrest against it."

He denied entry to the congresswomen on the basis of a law that allows authorities to ban advocates of the pro-Palestianian Boycott, Divestment, Sanctions movement, known as BDS.

Omar and Tlaib are public supporters of the rights of Palestinians who have voiced their opposition to Israeli policies — from the lobbying influence of the pro-israel lobby group, the American Israel Public Affairs Committee (AIPAC) to West Bank settlements —  since they began their tenure on Capitol Hill earlier this year.

Omar has also been criticized by House Democratic leaders for invoking "anti-Semitic tropes" and in February was forced to apologize for tweets that claimed AIPAC pushed "allegiance to a foreign country."

In one tweet, she suggested that politicians only support Israel to get donations from pro-Israel activists.

But Netanyahu's decision to prohibit Tlaib and Omar from visiting Israel prompted widespread bipartisan backlash — even from AIPAC, who said that although they "disagree" with the congresswomen's support for BDS, they believe "every member of Congress should be able to visit and experience our democratic ally Israel firsthand."

Omar decried Netanyahu's decision as an "affront" and accused him of bowing to pressure from Trump. Tlaib paid tribute to her grandmother in a social media post, calling her "my sity" and denouncing the move as "sign of weakness."

House Speaker Nancy Pelosi, D-Calif., called the decision "deeply disappointing." Sen. Marco Rubio, R-Fla., wrote on Twitter that while he disagreed "100% with Rep. Tlaib & Omar on #Israel . . . denying them entry to #Israel is a mistake."

Hasan Ashrawi, a veteran Palestinian politician and a member of the Palestinian Liberation Organization's executive committee, called it an "outrageous act of hostility against the American people."

"This is a dangerous precedent that defines all diplomatic norms and an assault on the Palestinian people's right to engage with the rest of the world," she said in a statement.

Trump has repeatedly criticized Tlaib and Omar, including through a series of tweets last month in which he said they should "go back and fix the totally broken and crime infested places from which they came." The tweets were also directed a Democratics Reps. Ayanna Pressley of Massachusetts and Alexandria Ocasio-Cortez of New York. The four progressive freshmen congresswomen of color — nicknamed "the Squad — have drawn the attention of Democrats and Republicans alike since they came to Capitol Hill earlier this year.

Although Trump has feuded in particular against the squad, he has accused the entire Democratic Party of being "anti-Israel."

"The Democrats have very much proven to be anti-Israel. There's no question about that," he said in March. "And it's a disgrace. I mean, I don't know what's happened to them, but they are totally anti-Israel. Frankly, I think they're anti-Jewish."