King has faced mounting backlash this week for arguing abortion should be illegal, even in cases of rape and incest 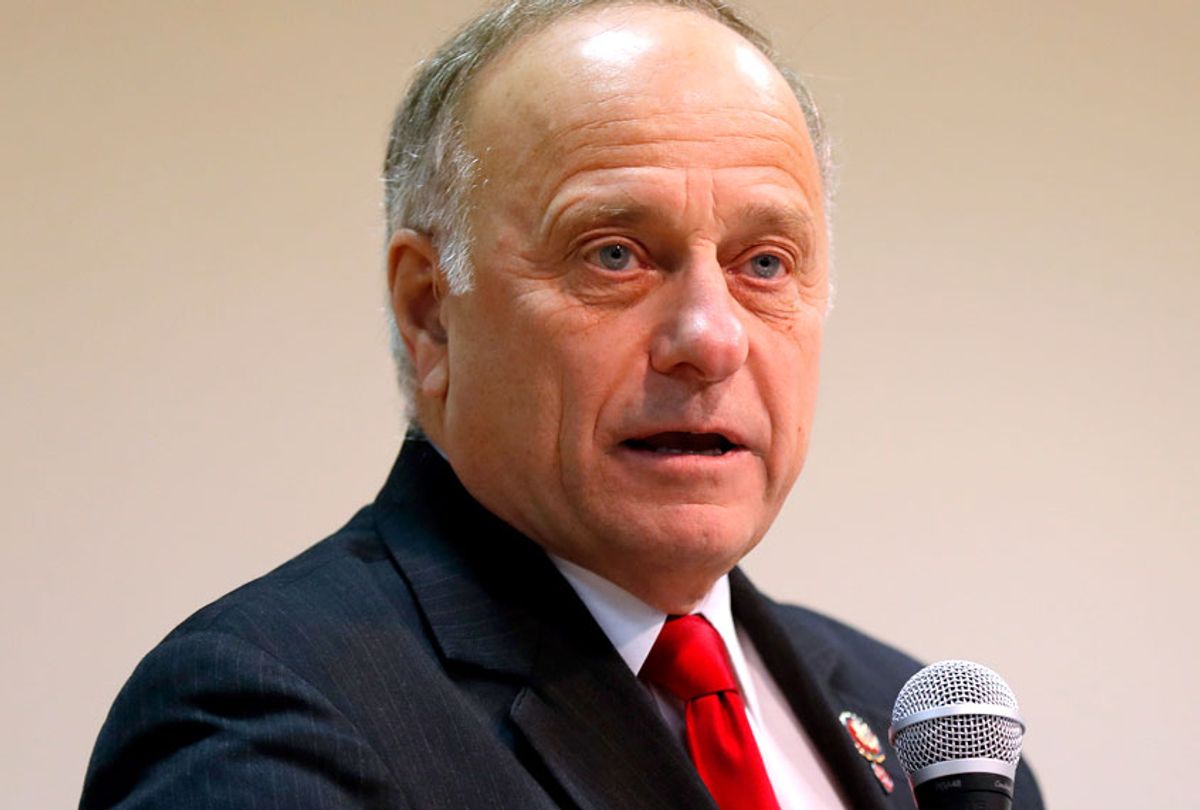 Rep. Steve King, R-Iowa, the most overtly racist member of Congress, doubled down on his latest controversial remarks — this time about abortion, rape and incest.

King, who has faced widespread bipartisan condemnation in recent days for arguing abortion should be illegal, even in cases of rape and incest, attempted to defend his position by arguing abortion bans protect minorities.

"My bill, HR 490, the Heartbeat Protection Act, protects more MINORITY lives than any bill moved as far in the History of Congress," King tweeted Thursday in response to criticism from Cory Booker, a senator from New Jersey and a Democratic presidential candidate. "What is 'hateful' is your support of killing little black babies, little brown babies, little Asian babies - BOTH born and unborn."

King has come under fire in recent days for questioning if there would "be any population of the world left" if it were not for rape and incest. He made the remarks to the Westside Conservative Club in Urbandale, Iowa, as he explained his opposition for exceptions for rape and incest in anti-abortion legislation.

"It's not the baby's fault," King said. "What if we went back through all the family trees and just pulled those people out that were products of rape or incest? Would there be any population of the world left if we did that?"

"Considering all the wars and all the rapes and pillages that's taken place, and whatever happened to culture after society, I know that I can't certify that I'm not a product of that," he added. "And I'd like to think every one of the lives of us are as precious as any other life."

Booker was just one of many lawmakers in Congress who urged King to resign over his "hateful, insulting words."

"This isn't the first time I've had concerns with what Steve King has said," McCarthy told Fox News on Wednesday night. "I think this just continues to show why that action was taken."

President Donald Trump declined to say whether he thinks King should resign.

"I haven't been briefed on it, but certainly it wasn't a very good statement," he told reporters Thursday.

Cheney urged King to "find another line of work" in January after he questioned how the terms "white nationalism" and "white supremacy" had become offensive.

Several Democrats running for president in 2020 also called on King to step down.

"Steve King is a racist, a misogynist and a disgrace to the country," tweeted Sen. Bernie Sanders, I-Vt. "He should not be a member of the United States Congress."

"You are a disgrace. Resign," said Sen. Kirsten Gillibrand, D-N.Y.

Sen. Amy Klobuchar, D-Minn., was one of several presidential hopefuls who urged people to donate to J.D. Scholten, a Democrat who nearly defeated King in 2018 and announced he would challenge the congressman again in 2020.

Scholten, who lost to King by only about 10,000 votes in a district Trump handily won in 2016, condemned the lawmaker's "selfish, hateful ideology."

"Excusing violence — in any way — is entirely unacceptable," Scholten said in a statement. "His comments are disrespectful to survivors and don't reflect Iowan values."

"I am 100% pro-life but Steve King's bizarre comments and behavior diminish our message & damage our cause. Trump needs defenders in Congress, not distractions," Feenstra tweeted.

King has a long and documented history of making controversial and offensive remarks.

During the 2016 election, the lawmaker expressed support for far-right politicians, including Hungary's far-right prime minister Victor Orbán — an outspoken white nationalist who has argued for a ban of non-white immigration to his country — and the Dutch politician Geert Wilders.

In June 2018, King re-tweeted a statement from well-known British Nazi sympathizer Mark Collett, who was a subject in the 2002 documentary, "Young, Nazi and Proud." The congressman defended his move by claiming that he did not know about Collett's affiliations. King refused to apologize for the tweet and stood by the sentiment of the comment, which falls in line with his hardline views on immigration and American nationalist ideas.

Earlier this year, Democratic Rep. Alexandria Ocasio-Cortez, the firebrand progressive freshman from New York, declared King was "too racist" even for Republicans.