Democrats punt on climate debate: This is why they risk losing in 2020

If Democrats are too chickens**t to hold a climate debate, how will they have the guts to beat Trump in 2020? 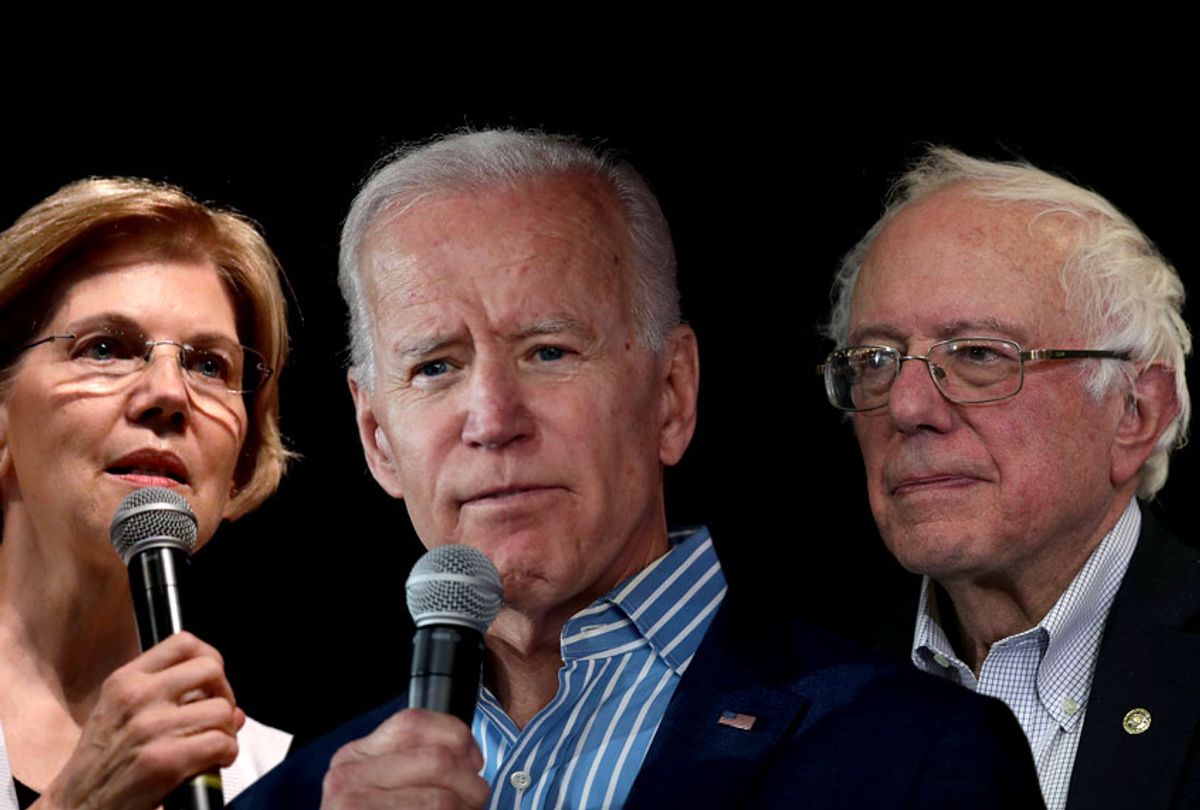 As painful as it is to admit this — since it could mean this country is well and truly screwed — the Democratic Party is proving to be wholly inadequate to facing the crisis America is mired in. That much was demonstrated Thursday, when the Democratic National Committee voted down a resolution, brought forward by longtime DNC member Christine Pelosi, calling for a presidential debate focused solely on climate change. This caused a group of young climate activists to start singing "Which Side Are You On?"

This isn't just a moral failure to refuse to center the most important problem facing not just the country but the planet. It's also a symptom of a larger disease afflicting the Democratic Party, which is giving into a politics of timidity and risk-aversion that, ironically, is only increasing the chances of another loss to Donald Trump and the Republicans in 2020. Use whatever  cliché you want — "nothing ventured, nothing gained," "playing not to lose" or plain old "choking." But this the poisonous attitude among not just party leaders but also ordinary voters may set Trump up perfectly to win re-election next year.

Symone Sanders, a senior adviser to the campaign of former Vice President Joe Biden, opposed the climate debate, calling it "dangerous territory in the middle of a Democratic primary process".

This is the same kind of thinking that is leading Democratic leadership in the House to run away from starting a real impeachment inquiry into Trump. This idea has taken hold in the ranks that voters only care about "kitchen table" issues, which is mostly code for a belief that they are skittish about change and that talking about any bigger issues — whether that's wealth inequality, structural racism, our failing health care system or climate change — will only serve to scare potential voters off.

Presidential candidate Sen. Elizabeth Warren, D-Mass., gave a speech at the DNC gala held after the meeting in which the idea of a climate debate was crushed Thursday. She was intensely critical of this approach to politics.

"When you’re in a crisis," Politico reporter Alex Thompson quoted Warren saying, "the last thing you do is back down from the big fights. So I’m here with a message for Democrats: this is not the time for small ideas."

Warren is right, not just morally but politically.

Yeah, on paper, it might sound smart for the Democrats to do what they can to sidestep the issue of climate change. The reforms needed in order to combat the problem are significant, and there's some reason to believe voters may be afraid of losing their jobs or having to be retrained, of seeing gas and heating prices rise, or of giving up a lifestyle we've all been accustomed to for decades, if not longer.

In reality, these fears are all the more reason for Democrats to get in front of this issue by holding a climate debate and aggressively promoting plans to fight climate change — whether those plans are called the Green New Deal or something else.

After all, Republicans will play on these voter fears, no matter what Democrats say or do. Trump's campaign has been aggressive in saying that Democrats are out to take away our creature comforts, falsely insinuating that clean energy proposals will lead to frequent blackouts to trolling liberals by selling plastic straws as campaign swag.

The only way for Democrats to fight back is to speak directly to voters themselves about climate change policies, and what sacrifices will and won't be required of the public. That's why Rep. Alexandria Ocasio-Cortez, D-N.Y., and Sen. Ed Markey, D-Mass., introduced the Green New Deal resolution in the first place. The idea was to allay public fears not by avoiding the conversation, but by reassuring voters that fighting climate change can produce economic opportunities in the same way that fighting the Cold War, fighting World War II and fighting the Great Depression did in the 20th century.

Instead, the DNC is making the presidential candidates look like cowards, even though most of the actual candidates have indicated that they're open to the idea.

Unfortunately, the idea has entrenched in some corners that the climate debate doesn't really matter, even as the Amazon rainforest — one of the few remaining hopes for cleaning carbon out of our atmosphere — is literally burning down. Robinson Meyer of the Atlantic has expressed skepticism of Sen. Bernie Sanders'  ambitious "Green New Deal" plan, on the grounds that it's unlikely that Congress would pass such a thing, even if Sanders wins the White House.

"What’s the point? Why put all of this out there?" Meyer wrote.

Well, the point of releasing plans, even if they won't pass, is the same as the point of having a climate debate: To let voters know where the candidates actually stand. There's already a major problem with disinformation, caused by the Republican Party and its president, who don't hesitate to lie shamelessly about Democratic views. If Democrats deliberately create a vacuum of knowledge by refusing to offer detailed accounts of where they actually stand on the issues, that misinformation will fill the void.

No less an authority on this issue than Al Gore, the former vice president and predecessor to Hillary Clinton in the Should Be President Tho Club, weighed in.

Gore isn't just the O.G. of Democratic climate hawks. He's also a guy who learned the hard way what happens when a presidential candidate runs a timid, apologetic campaign focused on the small stuff instead of the big visions: You lose to George W. Bush and the country is attacked by terrorists, starts a pointless, unnecessary and massively expensive overseas war, and collapses into a devastating recession. So maybe listen to him?

No doubt generational factors are impacting how seriously Democrats take the issue of climate change, as well. The people who care most about it — people age 18 to 34, who will be most affected by climate change over the course of their lives — happen to be the people who vote the least. Only 29% of people age 55 and older, the group most likely to vote, believe climate change will present a serious threat in their lifetimes. It's likely that the Democratic leadership is trying to craft the party's message around what appeals to likely voters, who tend to be older and simply don't rank climate as a major issue.

Again, this approach is completely backwards. There are many reasons young people don't vote, but one of the biggest ones is because they don't see politicians actually asking for their vote or speaking about issues that matter to them. If the Democrats want to convert non-voters into voters — which would benefit them a lot more than chasing a tiny slice of middle-ground independents — the most important step is centering issues that non-voters actually care about. Climate change clearly falls into that category.

It's not too late for Democrats to shift gears, and stop being afraid of their own shadows. Timidity may feel like a way of avoiding risk, but it's actually the riskiest strategy of all. It makes Democrats look like cowards and fails to offer the inspiring politics that are necessary not just to get people out to vote, but also to donate money and time to campaigns. This is not the time to retreat to the shadows and hope that a majority will vote for Democrats by default, or out of obligation. The best way not to lose the election is to act a little less afraid of losing the election.