Lawrence O'Donnell's "fake news" fail: A gift to Trump, and a moment of reckoning for the media 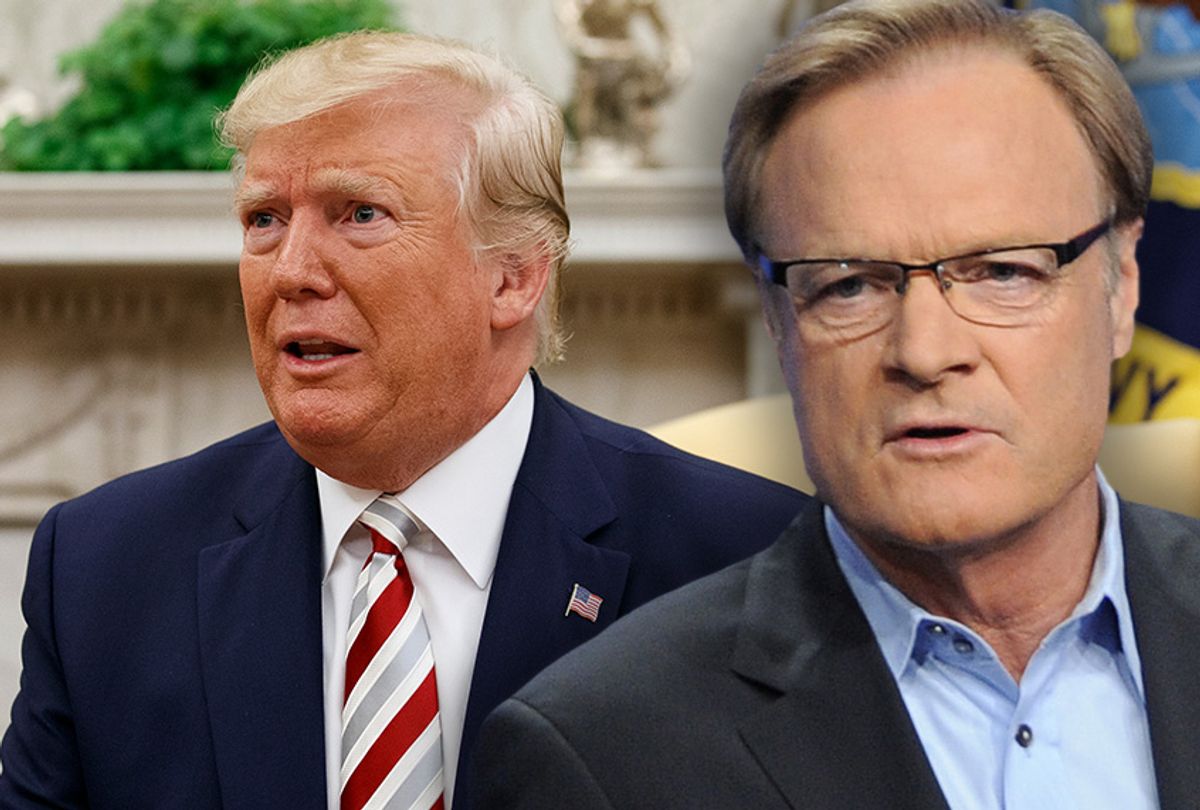 If MSNBC commentator Lawrence O’Donnell isn’t a secret double-agent for Donald Trump, he has sure functioned as one this week. On Tuesday he flat-out reported “fake news” about Donald Trump, soberly relaying a second-hand rumor of dubious provenance as the smoking gun that would bring down Trump’s presidency. After impeachment fever too over liberal Twitter for an entire night, O’Donnell then had to retract the whole thing and apologize on air Wednesday, creating that stopped-clock moment when Trump’s unhinged accusations against the press are partly true — or at least can’t be convincingly rebutted.

Both on Twitter and on his Tuesday night live program, O’Donnell reported that “a source close to Deutsche Bank” had told him that “Russian oligarchs” close to Vladimir Putin had co-signed the bank’s loans to Donald Trump, which amount to hundreds of millions of dollars. Obviously that would be a huge story, and it was one that spoke directly to the prior beliefs and convictions of the MSNBC audience: that Trump is a criminal, that he is financially entangled with the Russians in some way, and that sooner or later some revelation will break through the wall of lies and denial and bring him down. Since Robert Mueller’s report didn’t slake that thirst for narrative catharsis, maybe the Deutsche Bank records would!

But there were so many red flags around this so-called reporting from the beginning that it’s deeply disheartening anyone took it seriously. O’Donnell admitted that he hadn’t seen any evidence that this was true — and neither had his unnamed source, who was “close to Deutsche Bank” but not close enough, evidently, to have personally laid eyes on the paperwork. In other words, this was no better than a second-hand barroom rumor: O’Donnell knows a guy who knows a guy, who quite possibly knows another guy. Who has a cousin.

On one hand, O’Donnell opined, “this explains every kind word Trump has ever said about Russia and Putin.” But on the other hand, as he said on TV: “It's going to require a lot more verification before that can be a confirmable fact.”

This wasn’t a “story.” It was what we used to call a “blind gossip item,” in the days before those were rebranded as “news.” It hadn’t been fact-checked or verified in any way. As O’Donnell has admitted, he didn’t clear his anonymous-source reporting with anyone at NBC News before going live with it, as is standard practice at all reputable news organizations. Oliver Darcy’s follow-up report at CNN Business drily added:

Is it possible that O’Donnell’s regurgitated rumor is true? Well, sure. It’s always possible that gossip or conspiracy theories are true. But that’s not the relevant standard for news reporting, or critical thinking, or responsible adult behavior. Trump’s lawyers issued an unusually detailed denial in their letter to NBC — which was also sent to Salon, and no doubt to numerous other news outlets who covered O’Donnell’s statements — claiming they can disprove this particular allegation. In effect, O’Donnell has conceded about 99 percent of the point, and has retracted his original report in full.

One can certainly choose to read the president’s forceful reaction the way many of us read his attacks on the press and his rage against the Mueller “witch hunt” — as the Macbeth-like rantings of a guilty conscience. But that is interpretation or speculation, however plausible it may appear. It isn’t news.

What is perhaps most troubling here is the way O’Donnell-gate revealed how much of online #Resistance culture has succumbed to its own version of the credulousness, tribal hypocrisy and lack of critical distance that have plagued the right for decades or generations. No, I’m not saying that “both sides do it.” It’s not symmetrical: Generally speaking, only one side does. But the other side is going downhill fast.

To be blunt, O’Donnell was feeding the trolls. He was “reporting” vague shreds of scandalous rumor not because he believed it (he obviously had no idea) but because he knew his audience was primed to believe it, and would embrace it and amplify it many times over while he washed his hands and said “if true” and “single source” and “not been confirmed.” It’s not quite fair to compare him to Alex Jones or Laura Ingraham, since he has admitted fault and apologized, but in this case the journalistic practice was about the same.

Should Lawrence O’Donnell lose his job while NBC News indulges in some kind of internal inquest? I don’t know, and don’t much care. But this ought to be a moment of reckoning not just for the mainstream media, which just saw one of their own scored a spectacular own-goal on Donald Trump’s behalf, but also for its audience. If we have all retreated into our private caves of meaning where we just know what’s true, with or without evidence, then that whole Enlightenment thing was kind of a bust. Which might be the larger point this dark period of history is trying to teach us.