It’s time to talk about our broken democracy. Will tonight's Democratic debate moderators step up? 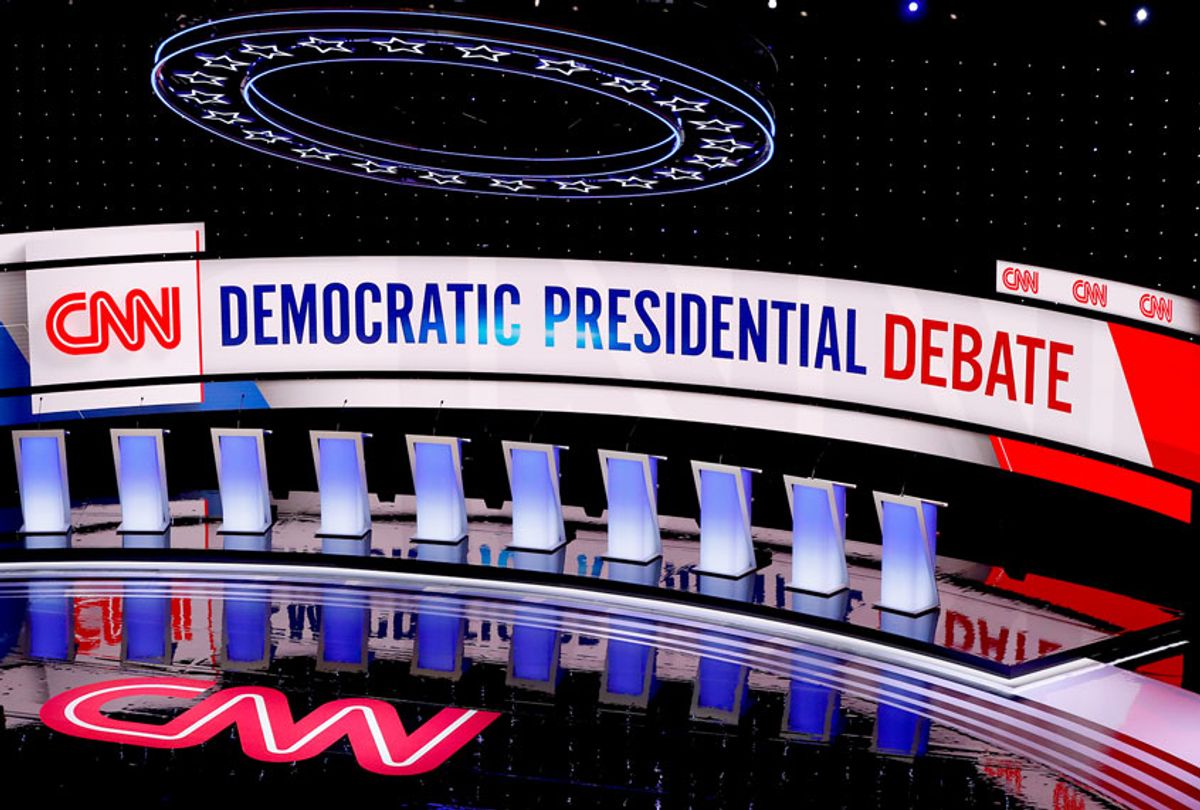 The stage for the second of two Democratic presidential primary debates hosted by CNN is shown, July 31, 2019, in the Fox Theatre in Detroit. (AP Photo/Paul Sancya)
--

Amanda Litman of Run for Something wants to know if the presidential candidates will support introducing ranked choice voting in federal elections, and also if they will commit to pursuing full congressional representation for the 4 million Americans — a total almost equal to our six smallest states — who live in territories without a voting member of Congress.

Ari Berman, the acclaimed voting rights author and Mother Jones journalist, notes that half the states in the country have passed new laws making it harder to vote — aimed at suppressing the votes of Democratic-leaning constituencies such as young people and voters of color. He’d like to see the candidates discuss their plans to make sure every eligible voter is able to exercise the right to vote in 2020.

Brian Cannon of One Virginia 2021 wonders what Democrats will do if they make major gains in state legislatures before the 2020 cycle. Will they use that power to gerrymander themselves safe seats, or to fix the system instead?

They offered us great questions. But there are, of course, many more: “Would you support public financing of elections?” “Will you support the creation of independent redistricting commissions?” “How will you ensure our elections are safe and secure from outside hacking?”

It’s time to talk about democracy. These questions — and the answers they would solicit — are critical for the public if they are to make informed votes in the presidential primaries. Yet if recent history is any guide, tonight’s Democratic debate moderators will, once again, fail to ask a single question about our broken democracy and what candidates plan to do about it.

Candidates themselves now must step up to demand the topic be covered. Otherwise, there’s little reason to believe the networks will change course.

The good news is that there is precedent for this: Reform-minded politicians could simply borrow a page from former presidential candidate Jay Inslee’s campaign.

The Washington governor devoted his entire presidential bid to elevate the issue of climate change — a topic that, like democracy, has been studiously undercovered on the national stage. Inslee focused attention on climate change and allied with organizations such as the Sunrise Movement to agitate for debate coverage — which they won, along with a CNN climate town hall.

Though it fell far short of an actual climate debate — which the Democratic National Committee oddly refused to sanction — the town hall was a major step towards finally taking climate change seriously and a significant departure from the mere minutes of climate coverage in the preceding debates. Many pundits even declared Inslee the winner of the night: Without his advocacy, none of this thoughtful discussion would have been possible.

Another former candidate, U.S. Sen. Kirsten Gillibrand, attempted this strategy on a smaller scale for democracy. She used the first debate, unprompted by moderators, to amplify this point: “Until you go to the root of the corruption, the money in politics, the fact that Washington is run by the special interests,” the New York senator explained, “you are never going to solve any of these problems.”

In an election cycle marked by candidates advocating innovative and bold democracy reforms, Gillibrand’s main solution stood out: A public financing system in which every voter gets up to $600 worth of democracy vouchers to donate to eligible federal candidates. Under this policy, those without wealth would be able to coalesce politically and financially to match even the richest among us. And those without the financial means normally required to compete for office could also run without hesitation — a major step towards diversifying Congress.

Gillibrand highlighted this public financing plan multiple times at the debate. Attempting to make its transformative impact understood, she connected our structural problems to Washington gridlock. She claimed that if it became law, “We can guarantee health care as a right, not a privilege. We can deal with institutional racism. We can take on income inequality, and we can take on the corporate corruption that runs Washington.”

Many in the Democratic field recognize and frequently speak about the importance of pro-democracy policies. What is needed, however, is a candidate who will vociferously bring up democracy reform even when unprompted on the debate stage and aggressively articulate solutions so as to prove to Americans that the fight for reform is far from hopeless.

So too does this individual have to challenge the networks to cover the topic and criticize them if they fail to do so — something no one has yet done in a serious manner.

A commitment to elevating democracy reform need not subsume one’s entire campaign. Reform candidates do not have to embody Inslee’s single-issue model. But with three candidates in the top tier, and only five polling consistently above 5 percent, it would be a national service for someone to lift up the democracy movement and foster this conversation.

Of course, ABC News can easily choose to hold this discussion tonight. We’ve just given them the questions to do so.