Fact check: Do 50 million people lose their private insurance every year? Will Medicare for All cost $30 trillion? 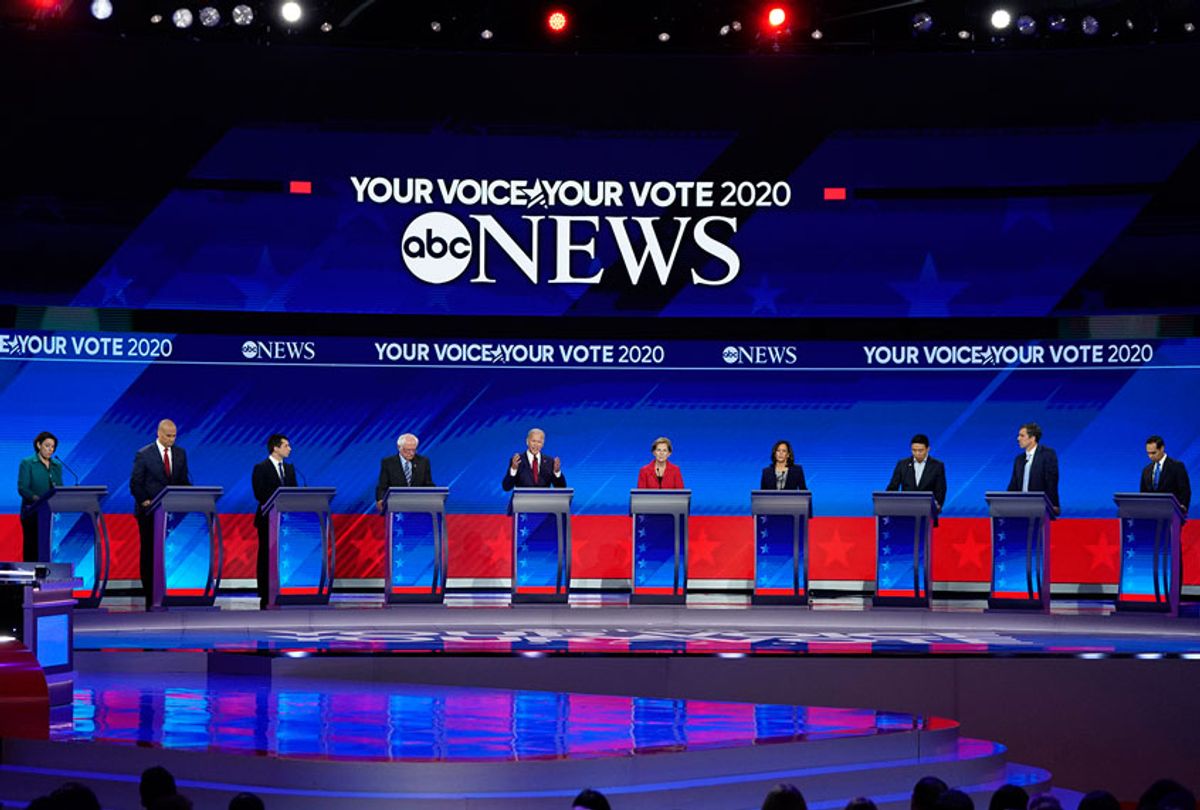 The candidates for the Democratic presidential nomination sparred for just under three hours Thursday night, highlighting the generational and ideological splits among the 10 leading contenders vying to take on President Donald Trump in 2020 — and the Democratic Party more broadly.

The divisions among the candidates could be seen clearly as former Vice President Joe Biden, Massachusetts Sen. Elizabeth Warren and Vermont Sen. Bernie Sanders opened the night with a heated debate about how to revamp the nation's health care system, which polls show is a top concern among Democratic voters.

Warren and Sanders argued "Medicare for All," the single-payer health care system popularized by Sanders, would save Americans money, while Biden and other candidates served up more moderate proposals that would build more gradually on the public-private model of coverage currently in place.

It was part of a broader policy divide onstage between candidates who favor less sweeping and more gradual reforms and those calling for complete overhauls.

"How are we going to pay for it?" Biden asked, arguing his idea of improving the Affordable Care Act — and protecting the legacy of former President Barack Obama's signature legislation — was better than Medicare for All.

"As far as my distinguished friend, the senator on my left (Warren), has not come forward and said how she's going to pay for it . . . I lay out how I will pay for it, how I will get it done and what we will do  going forward," Biden added.

Biden said he wants to add a "public option" to Obamacare. He said his plan would "cost $740 billion. It doesn't cost $30 trillion dollars. $3.4 trillion a year, it turns out, is twice what the federal budget is — that's before it exists now, without interest on the debt."

Biden is wrong here. Though Medicare for All could cost a staggering $3.4 trillion a year, according to one estimate, the federal budget is bigger. In 2018, the federal budget was $4.1 trillion, with more than $300 billion going toward interest. Additionally, Biden's campaign estimates his plan would cost $750 billion over a decade, while a study has estimated Sanders' plan could cost $33 trillion or more over a decade. (That study, written by Charles Blahous, a former official in President George W. Bush's administration, also concluded Sanders' plan would save Americans $2 trillion over time.)

Warren, seemingly aware of the optics of criticizing Obama, praised the former president, saying, "We all owe a huge debt to President Obama, who fundamentally transformed health care in America and committed this country to health care for every human being" before offering full-throated support for Sanders' proposal.

Sanders then chimed in to note Medicare for All is the only way to eliminate "greed and corruption" in the nation's health care system.

"Every study done shows that Medicare for All is the most cost-effective approach to providing health care to every man, woman and child in this country," he said. "I, who wrote the damn bill, if I may say so, intend to eliminate all out-of-pocket expenses, all deductibles, all co-payments. Nobody in America will pay more than $200 a year for prescription drugs, because we're going to stand up to the greed, and corruption and price-fixing of the pharmaceutical industry."

Though it's true that Sanders' proposal is extremely generous, it's not the "most" cost-effective approach to providing universal health coverage. Some studies have said Sanders' plan would be a cost-effective alternative to the current system, while others have predicted huge increases.

The projected cost of Sanders' plan remains unclear — the Congressional Budget Office (CBO) has not yet scored it. Sanders has said he would finance it through a host of taxes and by letting the government set health care prices. For now, many aspects of Sanders' bill remain unknown, including its total cost, design and political feasibility.

Also on Thursday night, Sanders claimed 50 million people "lose their private insurance every year when they quit their jobs, or they go unemployed or their employer changes their insurance policy."

This claim is mostly false, according to an analysis by PolitiFact. Though Sanders is correct that coverage continuity is a big problem in a country employer-sponsored insurance covers more than 150 million people, his claim "inflates the scope of the problem," PolitiFact noted.

Public option plans put forth by a host of contenders have received far less public attention, compared to Medicare for All, despite their ubiquity on the campaign trail and generally lower costs. Those proposals range from modest to overhauls so wide-ranging they resemble Medicare for All. Others fall in the middle of the two camps, offering incremental reforms which could lead to a single-payer system over a long timeline.

Erin Fuse Brown, a law professor at Georgia State University and co-author of "Health Law: Cases, Materials and Problems," previously told Salon: "The general idea of a public option is that everyone would have the option to purchase or buy into a government-run health program like Medicare, but they wouldn't necessarily be automatically enrolled in it. Private health insurances would continue to exist and compete with the government-sponsored plan."

In discussing his own public option proposal Thursday night, Biden said, "Of the 160 million people who like their health care now, they can keep it. If they don't like it, they can leave." That claim, Fuse Brown told Salon, is a "dangerous promise to make, given that it was one of President Obama's biggest overstatements about the ACA, which did far less to disrupt the health insurance system than Biden's plan would."

Warren noted Medicare for All would be financed by taxing the "richest individuals and the biggest corporations," while "middle-class families are going to pay less."

Fuse Brown said Warren's answer is "true" and shows she is "best honed in on the public's major concerns: Will they lose access to their doctors, and will their family's total costs for health care go up or down?"

As they did in the first two rounds of Democratic debates, candidates promoted divergent positions from Medicare for All in the name of "choice."

"Look, I think we do have to go far beyond tinkering with the ACA. I propose Medicare for All who want it," Buttigieg said. "We take a version of Medicare, we make it available for the American people, and if we're right, as progressives, that that public alternative is better, then the American people will figure that out for themselves. I trust the American people to make the right choice for them. Why don't you?"

Harris, meanwhile, tried to distinguish herself from Sanders by introducing the choice of private Medicare plans into Medicare for All. In discussing her proposal, she argued it focuses on "offering people choice, not taking that from them . . . because that's what people want."

Allison Hoffman, a professor at the University of Pennsylvania's Law School and a senior fellow at the Leonard Davis Institute of Health Economics, said the argument that preserving private insurance promotes choice "can be harmful." She told Salon Warren was the "best" on health care and had "dynamite responses to hard questions about choice and costs."

Hoffman said Warren made clear that "people don't like their health insurance, and impliedly, don't have a stake in keeping it. She may have oversold choice in other terms — I'm not sure how many people really have a deep relationship with their pharmacist — but her point about lack of investment in a particular insurance plan was solid."

"She clearly stated that what people care about most is access to health care when they need it, which is what the candidates should be addressing," Hoffman added.

After last night's debate, the candidates' positions on health care are more clear, Hoffman said. She broke it down: "In the incremental improvement camp are Klobuchar, Biden and Buttigieg. O'Rourke and Harris are in the middle. Sanders and Warren are for more fundamental transformation. Andrew Yang had some good points about payment systems, gesturing at the Cleveland Clinic and paying doctors salaries to drive down overutilization."