Man Trump labeled "my African American" quits GOP: "Their only concern is for whites" 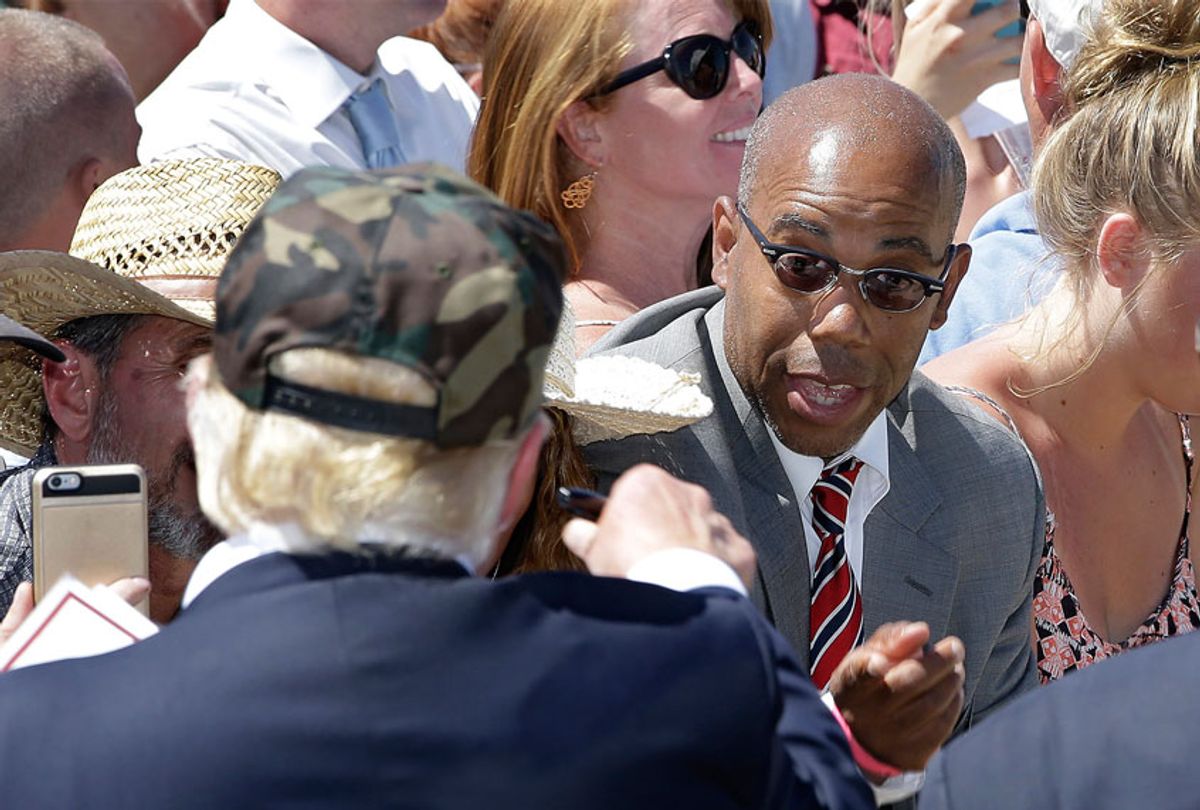 In this photo taken Friday, June 3, 2016, Republican presidential candidate Donald Trump, left, talks to Gregory Cheadle as he leaves a campaign rally at the Redding Municipal Airport, in Redding, Calif. Cheadle, whom Trump singled out while calling him "my African-American," said Monday that he is now the target of harsh criticism, including comments he feels are more racist than the remark by the presumptive Republican presidential nominee. Cheadle also said Monday that he was not there to back Trump and that he is considering other possibilities as well, including Democratic candidate Sen. Bernie Sanders. (AP Photo/Rich Pedroncelli)
--

The black man infamously singled out by then-candidate Donald Trump during a 2016 campaign rally has quit the Republican Party over racism.

Gregory Cheadle, a 62-year-old California real estate broker, was singled out by Trump during a rally in Redding in June 2016, while the candidate was under fire for making repeated racist comments on the campaign trail.

“Oh, look at my African American over here!” Trump declared as he pointed at Cheadle in the front row. “Look at him! Are you the greatest?”

Cheadle, a longtime Republican, laughed at the time and said he later voted for Trump. But last Thursday told PBS News that he was quitting the party over the president’s racist rhetoric and the lack of diversity in his administration. Cheadle told the outlet that the Republican Party was pushing a “pro-white” agenda while using black supporters like him as “political pawns.”

Looking back at the moment in Redding, Cheadle said he’s “more critical of it today than I was back then because today I wonder to what extent he said that for political gain or for attention.”

Cheadle, who has run for Congress four times as a Republican, abandoned his GOP bid in California’s 1st congressional district and is now running as an independent.

Cheadle listed a number of reasons he quit the party, citing the party’s defense of Trump's racist tweets aimed at " "the Squad," Rep. Elijah Cummings of Maryland and the entire city of Baltimore as the final straw.

“I said, ‘Enough is enough. I’m sick of it,’" Cheadle told The Washington Post, adding that Trump had a “white superiority complex.”

Cheadle said he could no longer take it after Republicans defended Trump when he told members of Congress to “go back” to where they came from and called the city of Baltimore “disgusting” and “rodent-infested.”

“Very few Republicans spoke out, and that’s part of the problem,” Cheadle told the Post. “I just found myself in amazement with the GOP just remaining silent when this was just so wrong. These things are wrong. I’m tired of blacks being denigrated and disrespected. I’m sick of it. And the GOP has done an excellent job of fueling my disgust by the way they have been treating us.”

Cheadle told PBS that he was also frustrated about the lack of diversity in Trump’s judicial appointments.

Trump was asked about Cheadle leaving the party on the White House lawn Thursday.

Trump’s approval rating among African American voters is at 10 percent, according to a new ABC News/Washington Post poll. Eighty percent of black voters say Trump is racist, according to a recent Quinnipiac University survey.

When asked whether he agrees with Cheadle that he is pursuing a “pro-white” agenda, Trump said he didn’t know who Cheadle was, but insisted, “We’ve had the best numbers we’ve ever had for African Americans in terms of employment and unemployment.”

Cheadle told PBS he had originally hoped Trump would tackle the racial disparities in health care and wealth inequality, but his optimism was soon extinguished. More than Trump's policies, he said, he was pushed away by the president’s attacks on NFL players protesting racial inequality, his “shithole countries” dig at Africa, and his feuds with black celebrities.

“We just haven’t had people called the names publicly that we have had with this administration,” Cheadle said. “To stay on this ship now, as a black Republican, I couldn’t do it.”