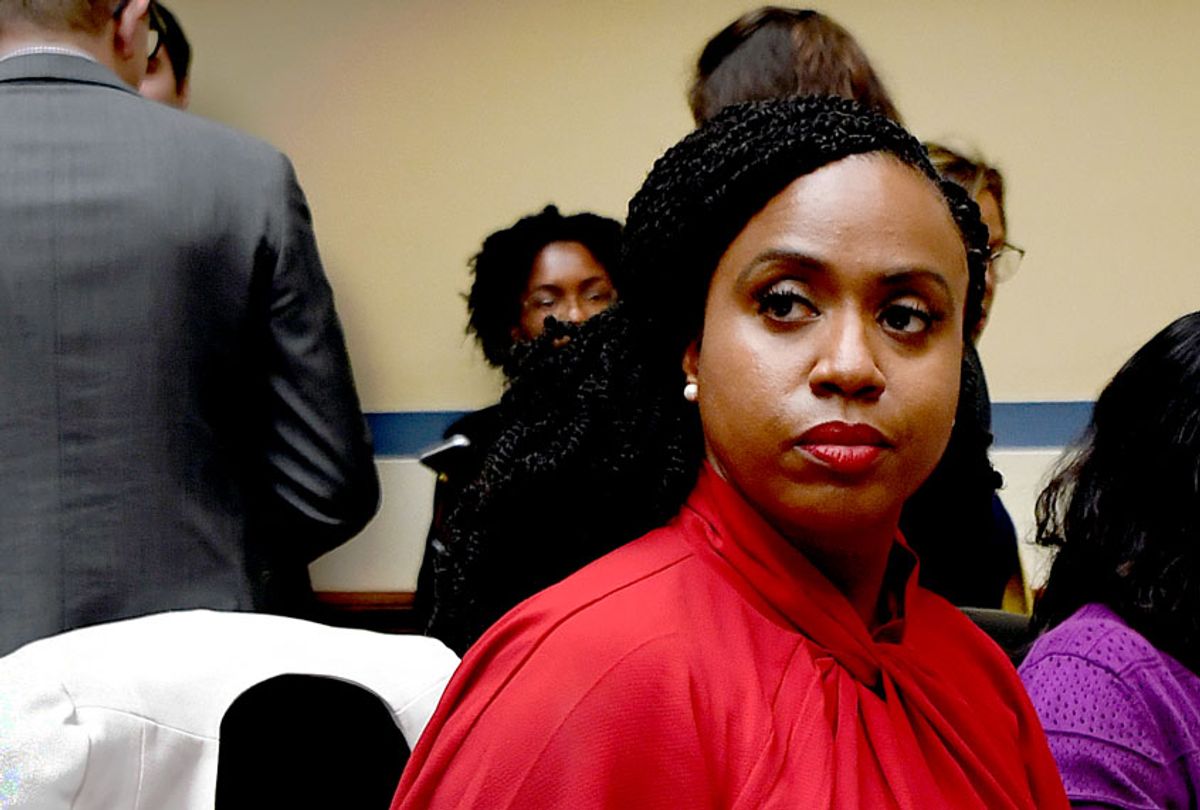 Rep. Ayanna Pressley, D-Mass., is set to introduce a resolution Tuesday calling for an impeachment inquiry into Supreme Court Justice Brett Kavanaugh, in the wake of new revelations of alleged sexual misconduct from his time in college.

In a statement, Pressley said it is "our responsibility to collectively affirm the dignity and humanity of survivors."

"Sexual predators do not deserve a seat on the nation's highest court, and Brett Kavanaugh's confirmation process set a dangerous precedent," Pressley added. "We must demand justice for survivors and hold Kavanaugh accountable for his actions."

The resolution will ask the House Judiciary Committee to investigate the possibility of impeachment. It comes just days after New York Times reporters surfaced a previously unreported claim of sexual misconduct against Kavanaugh.

An essay published in the Times revealed that Kavanaugh's Max Stier, a classmate of Kavanaugh's at Yale University, claimed that he saw the future Supreme Court with his pants down at a party. Friends allegedly pushed Kavanaugh's penis into the hand of a female student. Stier reportedly told senators and the FBI about the alleged incident before Kavanaugh's confirmation to the Supreme Court, however the FBI did not investigate his claims.

The woman involved in the alleged incident reportedly declined to be interviewed and told friends she did not recall such an incident. Kavanaugh has denied the allegation.

The essay, an excerpt from an upcoming book about Kavanaugh, also revealed that seven people could corroborate a sexual misconduct allegation by Deborah Ramirez, who had accused Kavanaugh of pulling down his pants and thrusting his penis at her during his nomination process. Kavanaugh has also denied that allegation.

In the days before Kavanaugh's confirmation, Sen. Chris Coons, D-Del., reportedly urged the FBI to reach out to Stier, Kavanaugh's classmate at Yale, about alleged sexual misconduct by the nominee. The FBI did not investigate the allegations or reach out to any individuals who may have had corroborating evidence. Many of those witnesses reportedly tried to reach the FBI on their own but failed.

Sen. Dianne Feinstein, D-Calif., revealed Monday that she was copied on that letter from Coons as she denounced the FBI for not investigating the claim. Feinstein also said that Democrats on the Senate Judiciary Committee sent a separate letter to the FBI asking it to interview "more than two dozen individuals" related to "multiple allegations" made against Kavanaugh.

"The FBI could have conducted an investigation that would have been seen as objective by both sides," Feinstein said in a statement. "Unfortunately it's now clear the FBI largely ignored these requests because the scope of its investigation was so constrained by the White House and Senate Republicans."

The latest allegation has prompted a new round of criticism among Democrats over Kavanaugh's fitness to serve on the nation's highest court, roughly a year after another accuser, Christine Blasey Ford, publicly testified that Kavanaugh had attempted to rape her during his confirmation hearing. Kavanaugh has vehemently denied Ford's allegations.

Harris asked House Judiciary Chairman Jerry Nadler, D-N.Y., on Tuesday to create a task force and use outside counsel to probe the allegations against Kavanaugh and whether he lied to Congress during his testimony. (Nadler on Monday said his panel was too busy "impeaching the president" to investigate Kavanaugh.)

President Donald Trump, meanwhile, defended his Supreme Court pick and called on the Justice Department to "rescue" the justice.

Any attempt at impeaching Kavanaugh is unlikely to succeed in the Republican-controlled Senate.Senate Majority Leader Mitch McConnell, R-Ky., on Monday called impeachment a "laughable suggestion," while Senate Judiciary Chairman Lindsey Graham, R-S.C., vowed Kavanaugh would not be impeached "over these scurrilous accusations."

"Get real," Sen. Dick Durbin, D-Ill., the No. 2 Senate Democrat, told Politico on Monday afternoon. "We've got to get beyond this 'impeachment is the answer to every problem.' It's not realistic."

"If that's how we are identified in Congress, as the impeachment Congress, we run the risk that people will feel we're ignoring the issues that mean a lot to them as families," he added.

Speaker of the House Nancy Pelosi, D-Calif., has not commented publicly on what action, if any, House Democrats should take against Kavanaugh. Senate Minority Leader Chuck Schumer, D-N.Y., told Politico Monday that he would discuss the matter later: "That's all I'm saying, which is nothing. I'm saying nothing on Kavanaugh."