Holocaust expert: Yes, those are concentration camps — and though Trump is not Hitler, the danger is all too real 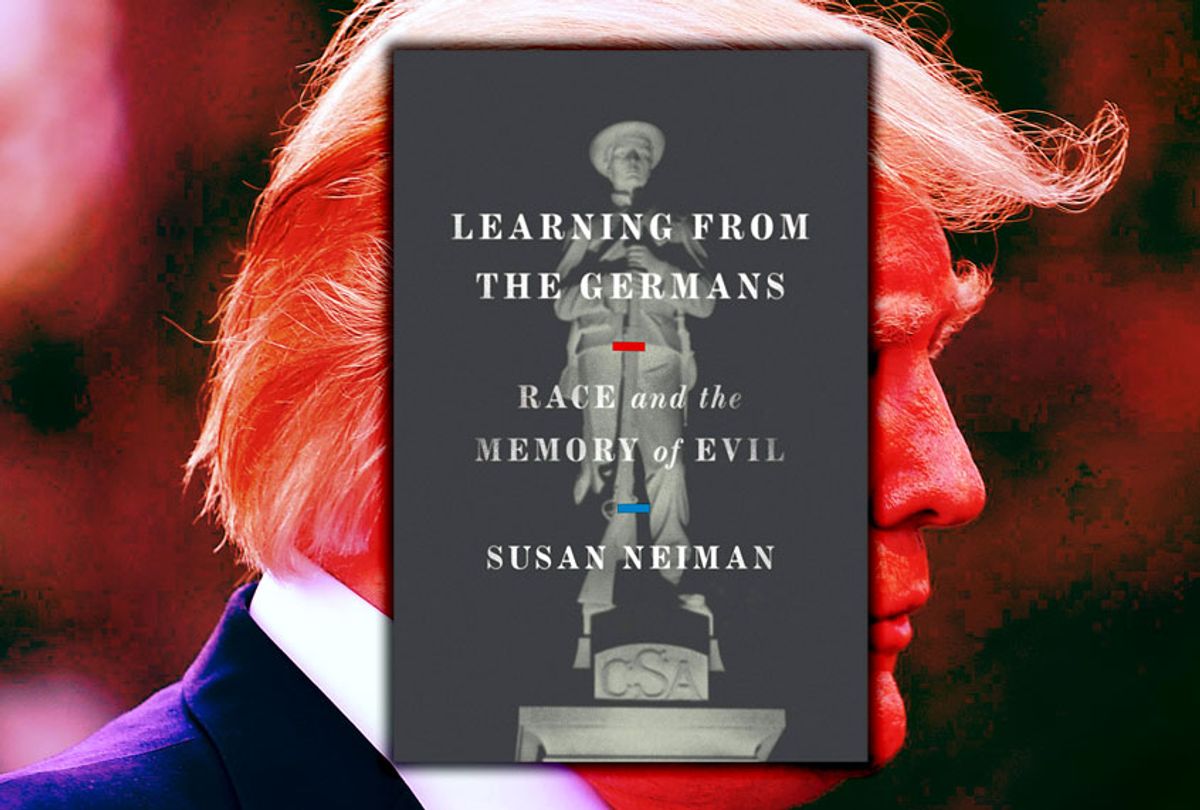 "Learning from the Germans: Race and the Memory of Evil" written by Susan Neiman (Getty Images/Farrar, Straus and Giroux)
--

To a large degree, the American news media has normalized Donald Trump and his fascist authoritarian assault on the country’s democracy and civil society by refusing to speak plainly and clearly about who Trump really is and the dangerous values he and his movement represent.

In a recent essay for the Guardian, Australian journalist Lenore Taylor observed that after watching a full Trump press conference, she understood "how much the reporting of Trump necessarily edits and parses his words, to force it into sequential paragraphs or impose meaning where it is difficult to detect":

In writing about this not-especially-important or unusual press conference I’ve run into what US reporters must encounter every day. I’ve edited skittering, half-finished sentences to present them in some kind of consequential order and repeated remarks that made little sense.

In most circumstances, presenting information in as intelligible a form as possible is what we are trained for. But the shock I felt hearing half an hour of unfiltered meanderings from the president of the United States made me wonder whether the editing does our readers a disservice …

I’d understood the dilemma of normalising Trump’s ideas and policies — the racism, misogyny and demonisation of the free press. But watching just one press conference from Otay Mesa helped me understand how the process of reporting about this president can mask and normalise his full and alarming incoherence.

The American media has “massaged” the truth in Trump's favor by waiting almost three years into his presidency to finally describe him as a racist and a white supremacist.

The evidence that Trump possesses such beliefs was publicly known for many years before his 2016 presidential campaign. There is no mystery or doubt: On a near daily basis, Donald Trump continues to show the world that he is a racist, a white supremacist and an authoritarian.

There is another word that can and should be used to describe Donald Trump. He is evil. By implication, Trump's policies and those who enact and support them are stained by his evil.

The cruelty, the violence, the greed, the selfishness, the racism, the sexism, the nativism, the bigotry, the destruction, the lying, the assault on reality, the contempt for human dignity and civil rights, rejection of the rule of law and democracy, the summoning and mainstreaming of chaos and nihilism and a panoply of other social pathologies are more than the absence of good. They are evil.

During a recent “Ask me Anything” session on Reddit, Tony Schwartz, who was Donald Trump’s ghostwriter for “The Art of the Deal,” issued a similar warning:

I believe deeply that most people are better than their worst behaviors…. I also believe there are some who are simply irredeemable and evil. Scott Peck called them "People of the Lie." They lack any conscience, as Trump does, and so they're almost purely evil. Trump is the most purely evil human being I've ever met, and also the most insecure.

Why is there such a deep reluctance on so many people's part —including the leaders of the Democratic Party — to label Donald Trump as evil? How do Donald Trump and his movement reflect deeper problems about the use and abuse of history in America? How strongly do Donald Trump’s concentration camps for nonwhite migrants and refugees echo the evil deeds of the Nazis?

In an effort to answer these questions I recently spoke with Susan Neiman, a former philosophy professor at Yale and Tel Aviv universities and now director of the Einstein Forum in Potsdam, Germany.

Neiman is the author of several books, including “Evil in Modern Thought: An Alternative History of Philosophy.” Her new book is “Learning From the Germans: Race and the Memory of Evil.”

Donald Trump and his regime can be reasonably described as evil. The evidence is obvious and overwhelming. Of course, the mainstream American news media will not use that language. Why are they so afraid of those terms?

Donald Trump meets every single criterion for using the word evil — and he keeps meeting it every day. Evil is a word that should be used with caution. I believe that many people, particularly a certain type of liberal centrist, were put off by the way in which George W. Bush was described as being evil. I also argue that Bush is evil and I explored this in my book “Moral Clarity.” Unfortunately, the description of “evil” has been so overused that many people just believe that it is a type of name-calling.

I disagree. When we relinquish the use of language like “evil” we are leaving the strongest linguistic weapons that we have in the hands of the people who are least equipped to use them. But I do understand the caution and anxiety about using that language. Given the way that Trump’s supporters and the broader right-wing movement in America works, I am unsure if describing Trump as being evil would actually bring any clarity to the conversation. That does not mean that accurate language for describing Trump and what he represents should be avoided.

Is this reluctance to use the word "evil" related to the fact that many observers on both the left and right still refuse to say that Donald Trump is putting nonwhite migrants and refugees in "concentration camps"?

There are people who get terribly upset and make claims and deflections such as, "They're not concentration camps, nobody's being gassed!" They are describing death camps. Concentration camps were simply places where masses of people, initially political prisoners, communists and social democrats — and as time went on also Jews, gay people and Sinti and Roma — and other targeted groups were interned under terrible conditions.

It drives me slightly crazy when people say, "Remember the Holocaust!" and "Never again!" and "Learn the lessons of the Holocaust!" What exactly are we supposed to learn if we cannot compare it to other historical events? Yes, people were carried through Europe, packed into cattle cars and generally gassed on arrival. That's the end.

What we need to examine and publicly discuss in much more detail and much more often in America, is the beginning. How the evils of the Holocaust came to be, the process. We need to look at the 1930s, that time before Hitler was elected.

Obviously, these are not one-to-one comparisons between America now with Donald Trump and Adolf Hitler and the Nazis. No two historical events are ever identical. Unfortunately, there are many parallels between Trumpism and the rise of the Nazis and Hitler. The demonizing of minorities, the demonizing of the Other, the telling a lie loud enough and often enough and people will stop caring whether or not it's true. These are fascist tactics.

There is a similar willful distortion in terms of how America’s slave labor prison camps — places where black human property was worked to death, raped, tortured, and abused in all manner of ways for centuries — are literally whitewashed as beautiful “Southern Plantations” where white people now go on tours, have weddings and other celebrations. There is much resistance at these places to telling any of this truth about the suffering of actual black Americans. To do so takes away the fantasy and fun of “Gone With the Wind” and its white supremacist fantasy of the Old South.

That is a fantastic example of what is wrong with America’s historical memory. Yes, African Americans probably grew up knowing these things. Many historians know these things. Most white Americans really do not.

In terms of historical memory, how do you contextualize the way some Jewish young people go to the sites of death camps and concentration camps in Europe and then take selfies where they are smiling and having fun?

I find it pretty disgusting. Yes, there is this sense that we survived. The Nazis didn't kill us all. There are certainly a lot of people, especially Jews who come back to Germany, that do have such feelings. There is a phenomenon called “dark tourism,” which is an example of how evil attracts people. There's something creepy and unhealthy about too much of an obsession with sites of slavery and murder. But it is also important that those historic sites exist. With dark tourism, I would be very suspicious of a person who feels compelled to go to all those sites of suffering and misery.

Let's assume that some decades from now a young person finds their parents’ or grandparents' Trump regalia hidden away in a box in the closet or basement. Is there going to be a sense of shame and embarrassment?

It completely depends on what happens next. Senior Nazi Party leader Hermann Göring said, "Fifty years from now, people will be making statues to celebrate us." Thank God he was wrong. And Göring was wrong because Nazi Germany lost the war. He was wrong not only because they lost World War II, but also because after the war fascism was rejected by West Germany.

In 1945 and 1946, there was no clear way to know that outcome. I think one is morally required to feel enough hope to allow action. This is a basic moral position. Cynicism and surrender creates inaction. At this moment in time in America and other parts of the world it is incredibly important for all of us to not to feel overwhelmed. We must not surrender. This American nightmare under Donald Trump is going to come to an end in November 2020. However, for Trumpism and this nightmare to end we must act.

Donald Trump is that thing which everyone was afraid that America really was and is. Trump is Incredibly stupid, incredibly arrogant and just mind-numbingly wrong about everything. Donald Trump has created a sense of enormous shame for Americans who live or travel abroad. In contrast to Barack Obama and his family who are loved abroad and were and are a source of great pride for America, Trump is the opposite.