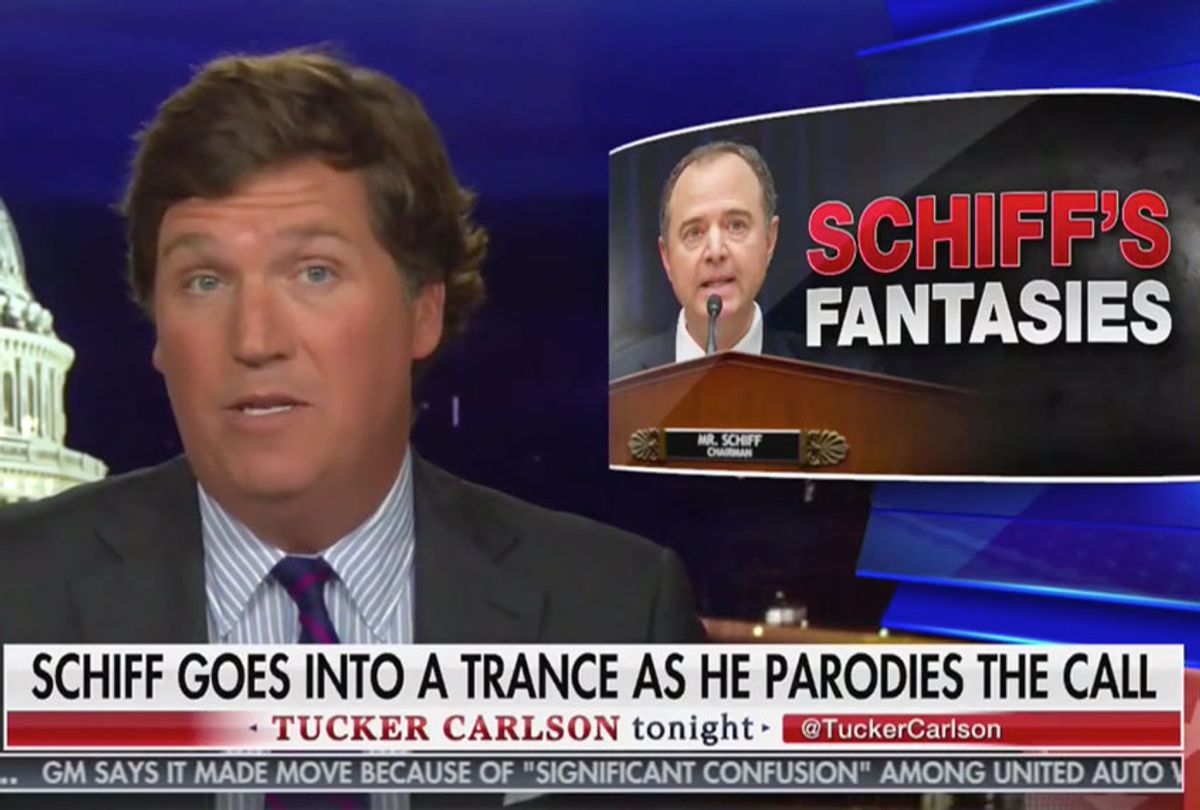 "The prime example is Adam Schiff," Carlson said on his primetime show.

The Fox News host claimed that the California Democrat misrepresented a call between President Donald Trump and Ukrainian President Volodymyr Zelensky during Thursday's House Intelligence Committee hearing. That call is at the heart of a complaint filed by a whistleblower in the intelligence community, which accused Trump of soliciting Zelensky to interfere in the 2020 election and the White House of attempting to cover up those efforts.

"He recently went into a kind of trance and delivered his own prophetic version of what he believed must have happened between President Trump and the president of Ukraine," Carlson said before he played a clip of Thursday's congressional hearing, which was led by Schiff.

"Keep in mind, that isn't some guy babbling in the men's room at Starbucks. That is the man who chairs the mighty House Intelligence Committee," the Fox News host continued. "We trust him with our most sensitive information, and yet he is clearly — he's demonstrably mentally ill.”

Carlson's tirade at the start of his show came just hours after Joseph Maguire, the acting director of national intelligence, called the whistleblower's complaint "totally unprecedented" as he m declared that "no one is above the law" while testifying publicly before the House Intelligence Committee. Though Maguire stated the whistleblower "acted in good faith," Carlson dismissed the complaint as nothing more than an airing of grievances on opposing foreign policy views.

"The whistleblower did not agree with the president's foreign policy views, so he felt entitled to veto those views and bring the U.S. government to a standstill," he declared, insisting it was "hard to believe" that Democrats on Capitol Hill want to impeach Trump over his communications with Ukraine.

Earlier this week, Carlson started an on-air feud with his fellow colleagues, anchor Shep Smith and Fox News legal analyst Judge Andrew Napolitano, after one of his guests called the latter a "fool" for saying that Trump had committed a crime, an insult that went unchallenged by Carlson.

Ingraham was not the only conservative commentator to take aim at Thunberg. In an appearance with guest host Harris Faulkner, The Daily Wire's Michael Knowles called Thunberg a "mentally ill Swedish child," prompting the network to issue a swift apology and state that they have no plans to book Knowles in the future.