Fox calls a commentator who bullied Greta Thunberg "disgraceful," but refuses to offer a comment about its big star 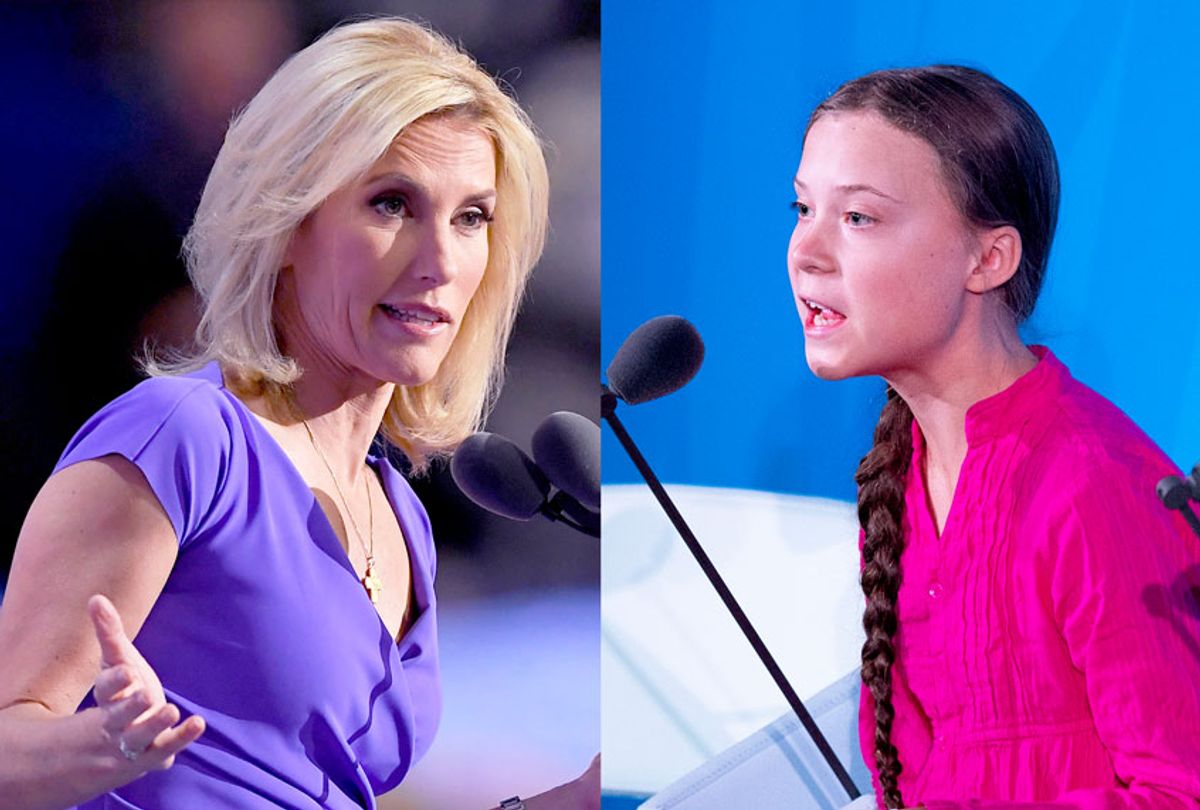 For a second year in a row, Fox News host Laura Ingraham has found herself embroiled in controversy after attacking a teenager on live TV — this time a 16-year-old climate activist with autism.

On behalf of youth across the globe, Greta Thunberg put world leaders on notice Monday when she addressed delegates at the United Nations climate summit, saying: "If you choose to fail us, I say we will never forgive you."

After showing highlights of Thunberg's speech, Ingraham asked her viewers a rhetorical question: "Anyone else find that chilling?"

The Fox News host then proceeded to roll tape on the 1984 horror movie "Children of the Corn." The Fritz Kiersch film was based on a Stephen King short story about a Nebraska community, in which a malevolent supernatural creature manipulates the town's children into murdering the adults and forming a sinister cult.

"A time of tribulation has come," declared the character Isaac in the clip shown by Ingraham. "A test is at hand — the final test."

"I can't wait for Stephen King's sequel, 'Children of the Climate,'" Ingraham said to audible laughter from individuals in her studio. "Now, the left — if they ever get in power — will simply use the excuse of climate change to reward their friends."

The Fox News host's criticisms of Thunberg were swiftly rebuked as "bully commentary" by her own brother, Curtis Ingraham.

"Clearly my sister’s paycheck is more important than the world her three adopted kids will inherit. I can no longer apologize for a sibling who I no longer recognize," he wrote Monday night on Twitter following the segment. "I can and will continue to call out the monstrous behavior and the bully commentary born out of anger."

And Ingraham was not the only commentator on Fox News to take aim at the Swedish activist on the autism spectrum. (Thunberg uses the familiar term “Asperger’s syndrome,” which is no longer used for diagnostic purposes in the U.S.) The Daily Wire's Michael Knowles attempted to discredit the climate movement by attacking her mental health.

"If it were about science, it would be led by scientists rather than by politicians and a mentally-ill Swedish child who is being exploited by her parents and by the international left," Knowles said of the movement. (The consensus of the scientific community overwhelmingly holds that climate change is real, dangerous and caused by human beings.)

"How dare you!" interjected the political commentator and Democratic activist Chris Hahn.

"What you're seeing here is a political movement and a religious movement," Knowles continued. "And it's fulfilling religious and political goals of the left, but it isn't doing very much for science."

When guest host Harris Faulkner asked Hahn to finish with his thoughts, the pundit told Knowles he should be ashamed.

"I'm not," Knowles responded with a grin. "I'm attacking the left for exploiting a mentally-ill child."

"Relax, skinny boy. I got this. OK?" Hahn replied. "You're attacking a child. You're a grown man. Have some couth."

A spokesperson for Fox News apologized after the segment aired, telling The Washington Post in a statement that "the comment made by Michael Knowles who was a guest on 'The Story' tonight was disgraceful — we apologize to Greta Thunberg and to our viewers." While Fox News confirmed to Salon that the network had no plans to book Knowles in the future, a spokesperson declined to also apologize for Ingraham's remarks or offer any comment.

Last year, Ingraham lost a number of advertisers after mocking David Hogg, a survivor of the Parkland school shooting, after he was rejected from several colleges. The Fox News host later apologized for her comments, saying that "my show was the first to feature David immediately after that horrific shooting" and Hogg was "welcome to return to the show anytime for a productive discussion."

Hogg re-tweeted this musing in the wake of Ingraham's latest controversy: "Imagine being tougher on Greta Thunberg than Vladimir Putin."

President Donald Trump also took a swipe at Thunberg alongside his favorite cable news network, tweeting in a sarcastic tone Monday night that "she seems like a very happy young girl looking forward to a bright and wonderful future. So nice to see!"

As she has emerged as a prominent voice of climate change activism, Thunberg has been repeatedly attacked by members of the right for being on the autism spectrum.

"I have Aspergers and that means I’m sometimes a bit different from the norm," Thunberg tweeted in response. "And — given the right circumstances- being different is a superpower. #aspiepower."

"I'm not public about my diagnosis to 'hide' behind it, but because I know many ignorant people still see it as an 'illness', or something negative," she added. "And believe me, my diagnosis has limited me before."