Perry has drawn scrutiny, because he led the U.S. delegation to Volodymyr Zelensky's inauguration in Ukraine in May 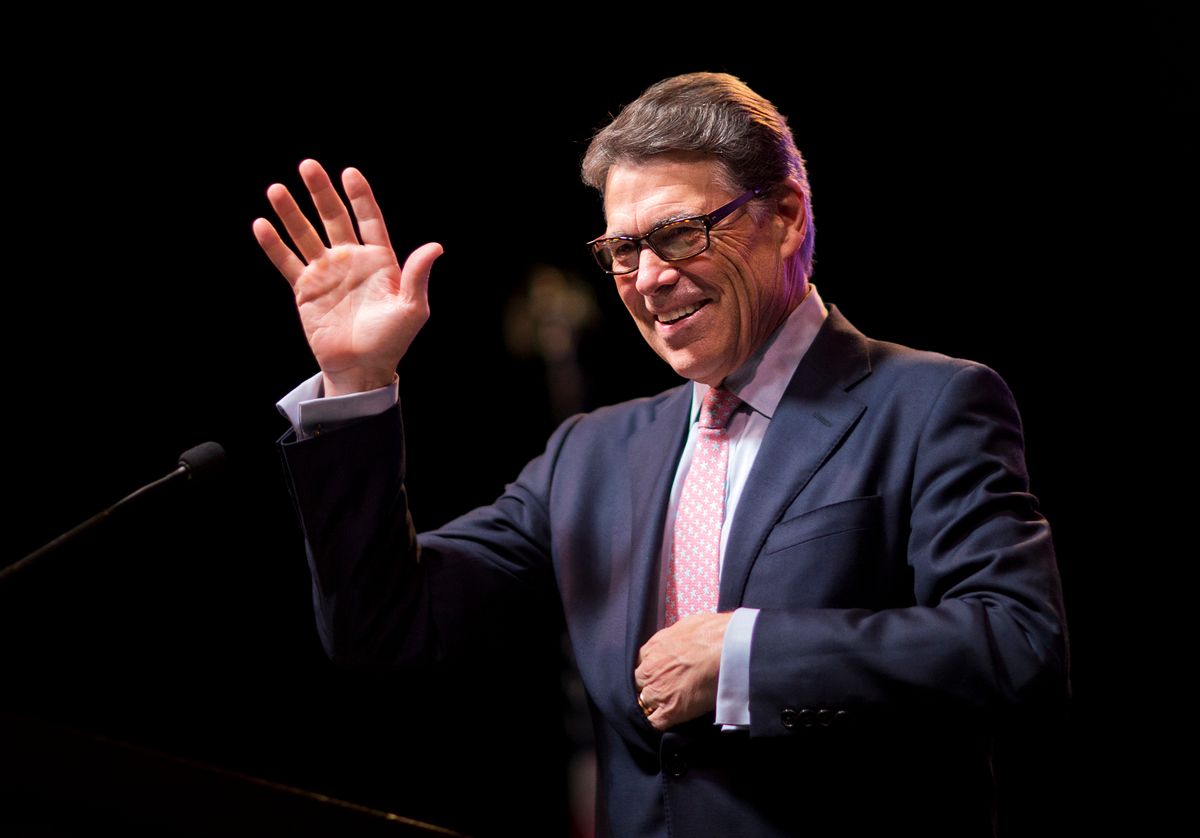 FILE - In this Aug. 7, 2015, file photo, former Republican presidential candidate and former Texas Gov. Rick Perry, waves to the crowd as he steps to the podium to speak at the RedState Gathering in Atlanta. Perry has joined the board of a stem cell firm where he underwent experimental back surgery before running for president in 2011, a procedure that didn't calm the chronic pain that the Republican later blamed for his "oops moment" and other infamous gaffes that sunk his once-promising campaign. (AP Photo/David Goldman, File) (AP)
--

Energy Secretary Rick Perry, who has dedicated himself to bolstering President Donald Trump's fossil fuel agenda, is expected to announce his resignation from the administration by December, multiple news outlets reported Thursday night.

Perry, one of the longest-serving Cabinet members in an administration with high turnover, was confirmed as energy secretary on March 2, 2017 with a 62-37 vote in the Senate. He won support from every Republican and 10 Democrats, including Joe Manchin of West Virginia, Claire McCaskill of Missouri Debbie Stabenow of Michigan.

He has largely avoided controversy during his time in the administration. But in recent weeks, his travels to Ukraine have embroiled him in the impeachment inquiry surrounding Trump's political actions there. Sources familiar with Perry's plans told Politico that the scandal is unrelated to his exit, which they said he has been planning for several months.

Perry has drawn scrutiny, because he led the U.S. delegation to Ukrainian President Volodymyr Zelensky's inauguration in May, a visit that came as the administration was working to determine whether the new leader would be receptive to Trump's demands, according to a whistleblower complaint to the intelligence community publicly released by the House Intelligence Committee last week. In leading the delegation, Perry replaced Vice President Mike Pence, who is facing mounting questions about his own involvement in the scandal.

It is unclear if Perry will have to testify before Congress about the Ukraine affair, which centers on questions about whether Trump withheld congressionally approved military aid to Ukraine in an effort to pressure Kiev to investigate former Vice President Joe Biden, a leading Democratic presidential candidate, and his son. He vowed to "work with Congress and answer all their questions," according to CNN.

No evidence has emerged that Perry participated in Trump's effort to pressure Ukrainian officials to probe Biden, but Sen. Bob Menendez, D-N.J, earlier this week sent a letter to Perry requesting information about his interactions with Zelensky and other Ukrainian officials.

"Given your role as the leader of the official United States delegation to the inauguration and the White House's recent release of evidence that Trump request that Ukraine's government investigate his domestic political opponent, your insight into the U.S. delegation's trip is of particular interest to the Senate Foreign Relations Committee," Menendez wrote.

In addition to leading the delegation in May, Perry has visited Ukraine multiple times as energy secretary and helped craft a deal that increased U.S. coal experts to the country. He tweeted an image of his most recent meeting with Zelensky last month.

Perry was also a subject in a subpoena that House Democrats issued Trump's personal attorney Rudy Giuliani earlier this week. It seeks information about communications that the Energy Department may have had regarding Trump's discussions with the president of Ukraine.

Deputy Energy Secretary Dan Brouillette is expected to replace Perry, Politico noted, citing three people familiar with the matter. No formal announcement has been made.

Perry is likely to return to the private sector in the energy industry, two people close to him told the New York Times.

"While the Beltway media has breathlessly reported on rumors of Secretary Perry's departure for months, he is still the Secretary of Energy and a proud member of President Trump’s Cabinet," DOE spokesperson Shaylyn Hynes told Politico. "One day the media will be right. Today is not that day."