How "Big Mouth" pushes back on the angry teenage girl stereotype 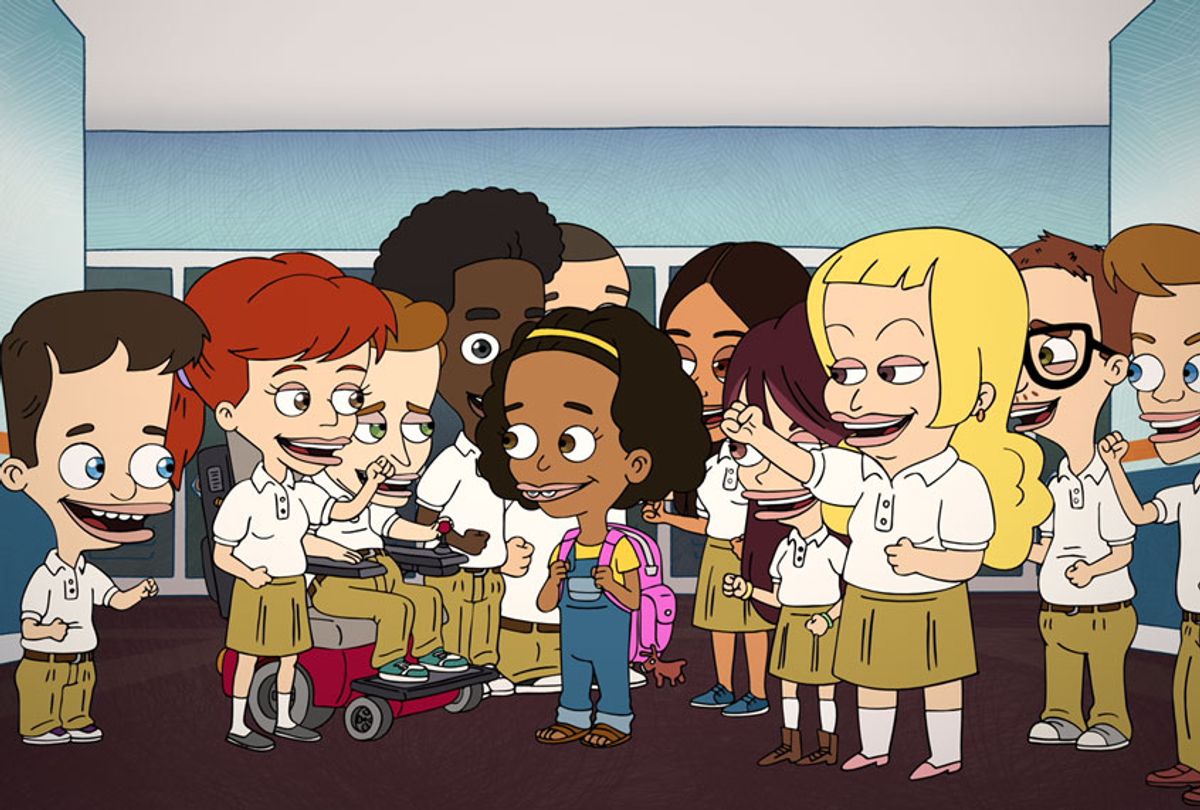 But this time, Jay’s (Jason Mantzoukas) unbridled lust sets off a series of events that drive the entire season. While drooling over a girl in shop class, he accidentally chops off the end of classmate Andrew Glouberman’s (John Mulaney) finger. Blood spews everywhere, and it’s unfairly determined that the girl’s revealing outfit is to blame. Pubescent boys will be boys — which evidently means self-control is off the table.

A strict dress code is soon enforced for the girls, while the boys can phone it in as long as they adhere to the “no shirts with curse words” rule. In protest, the girls organize a Slut Walk, and show up to school in their most revealing clothing. That is, except for Missy Foreman-Greenwald (Jenny Slate), who interprets the event as a way to advocate for wearing what one is most comfortable in — in her case, that’s a loose-fitting pair of overalls.

In response, dim-witted Lola (Nick Kroll) and catty Devin (June Diane Raphael) label her a traitor to her gender. Missy, who is pretty conflict-averse, keeps quiet, but inside she’s boiling. We catch a glimpse into her subconscious — it’s a spaceship piloted by Missy and her longtime-crush, “Firefly” actor Nathan Fillion.

But this time, they’re transporting a dangerous passenger: Missy’s dark alter ego, Mirror Missy, who continues to encourage her — much like a Sith lord — to lean into her anger.

The next day, the girls are required to wear scratchy uniforms. Missy shows up again in her overalls, staging a successful one-woman protest against the sexist Mr. Lizer when she finally gives into Mirror Missy and shouts at him: “Eat your own ass!”

Fueled by a certain righteous anger, she calls out her cheering female classmates for being hypocrites and finally confronts her obsessive ex-boyfriend Andrew for his controlling behavior.

“We went out for like five fudging days,” she screams. “I don’t owe you squat diddly. Get over it!”

This episode is aptly titled, “Girls Are Angry Too.” And it is utterly satisfying.

Historically, television and film writers haven’t been particularly adept at depicting female anger, especially the anger of adolescent girls, in a complex way. When it is explored, it’s often through cliched cliquiness, enacted by mean girls, or with an eye roll in the direction of how dramatic teenage girls can be.

Even prestige programs like “The Sopranos” — in all its enthralling, masterful glory — stalled on that front.

Viewers are introduced to Meadow Soprano (Jamie-Lynn Sigler), the daughter of crime boss Tony (James Gandolfini), as she is completing high school. She’s smart, but spoiled. There are hints that she’s conflicted about how her father makes a living, and resentful of her mother’s tolerance of it. Scratch the surface even just lightly, and there’s an obvious depth of simmering anger about her parents’ moral hypocrisy — and her own, in that she profits from Tony’s criminal activities.

This is explored in later seasons, as Meadow crosses into adulthood. But for the first few seasons, she’s just kind of the worst, written as flat and whiny. Twenty years after the show’s premiere, there are still Reddit threads and “worst character roundups” dedicated to how much viewers hate her.

Some of this, of course, isn’t just centered on the writing. There’s a bigger societal problem with how we view the feelings of teenage girls — both real and fictional.

This was a main thread in “I Love You, Now Die,” a recently released documentary by filmmaker Erin Lee Carr.

Carr is known for taking stories that are prime for sensationalization, like the “cannibal cop” case or the bizarre life of Gypsy Rose Blanchard, and plunging below the headlines, spotlighting the human elements within. This documentary broke down the case of Michelle Carter, a teenage girl who sent her 18-year-old boyfriend, Conrad Roy, texts commanding him to commit suicide; at her suggestion, he eventually locked himself in his car with a portable generator, suffocating on the fumes.

When the police eventually seized her phone, the contents were disturbing. There was a seemingly endless stream of messages in which she encouraged his suicidal tendencies:  “Drink bleach. Just drink bleach,” “Why haven't you done it yet tho?” “If u don't do it now you're never gonna do it.”

Carter was beautiful — with blonde hair and, if the clothes she wore for her court appearances are any indication, a closet of J. Crew — but clingy. It came in initial media reports that she had a tough time fitting in with girls at school, and seemed prepared to use Roy’s death as a sort of social currency. She could play the grieving girlfriend.

At the time, former HLN commentator Nancy Grace declared, “She just did this for attention.”

And that is an easy narrative to distill and sell to an audience; as I wrote when the documentary first released, Carter being an attention-obsessed black hole of neediness just confirms what many believe categorically about teenage girls in general. Her neediness just turned dark.

Carr unravels this narrative, bringing to light Carter’s personal struggles with mental health and isolation. In her hands, Carter is no longer a one-dimensional, murderous ice queen. She’s a deeply troubled young woman whose actions, though utterly tragic and despicable, have motivation and nuance — but that’s not the kind of story about a teenage girl that can easily be distilled into a splashy tabloid cover.

Over the past several years, there has been an influx of insightful shows about womanhood: “Grace & Frankie,” “Shrill,” “Girls,” “Insecure,” and “Broad City,” just to name a few. Some are funny, some are serious, but they all are imbued with a certain nuance that can be, I think, attributed in large part to writers rooms that actually are led by, or at least contain, women.

The same can be said about current series that best challenge those tired teenage girl stereotypes, like Hulu's “Pen15” and Netflix's “Derry Girls," both of which boast women creators. After all, who knows better about the underlying complexities of that tough transition from girlhood to womanhood than someone who has actually experienced it?

In “Big Mouth” there’s a lot of room given to explore why its girl characters act in ways that are sometimes perceived as problematic by the adults around them. Missy’s albeit mild rebellion at school stems from two seasons of suppressed emotions. She’s finally standing up for herself. Meanwhile, her friend, Jessi Glaser (Jessi Klein), is filled with a palpable anger that manifests through shouting matches with her mother, some definite bullying behavior at school, shoplifting and drug experimentation.

But because the show writers gave us a peek under the surface, viewers know she’s dealing with depression, a general surge of teenage hormones and her parents’ acrimonious divorce.

Through the series, the creators of “Big Mouth” explore how boys deal with puberty in ways that subvert stereotypes, such as how in the holiday special “My Furry Valentine,” Nick Birch (Nick Kroll) is shown to be quick to tears. In this way, the show has always been equal opportunity when it comes to understanding and nuance. There’s room to push back on the age-old adage boys will be boys, and in exploring female anger, it allows teenage girls to truly be girls, too.

"Big Mouth" Season 3 is currently available to stream on Netflix.