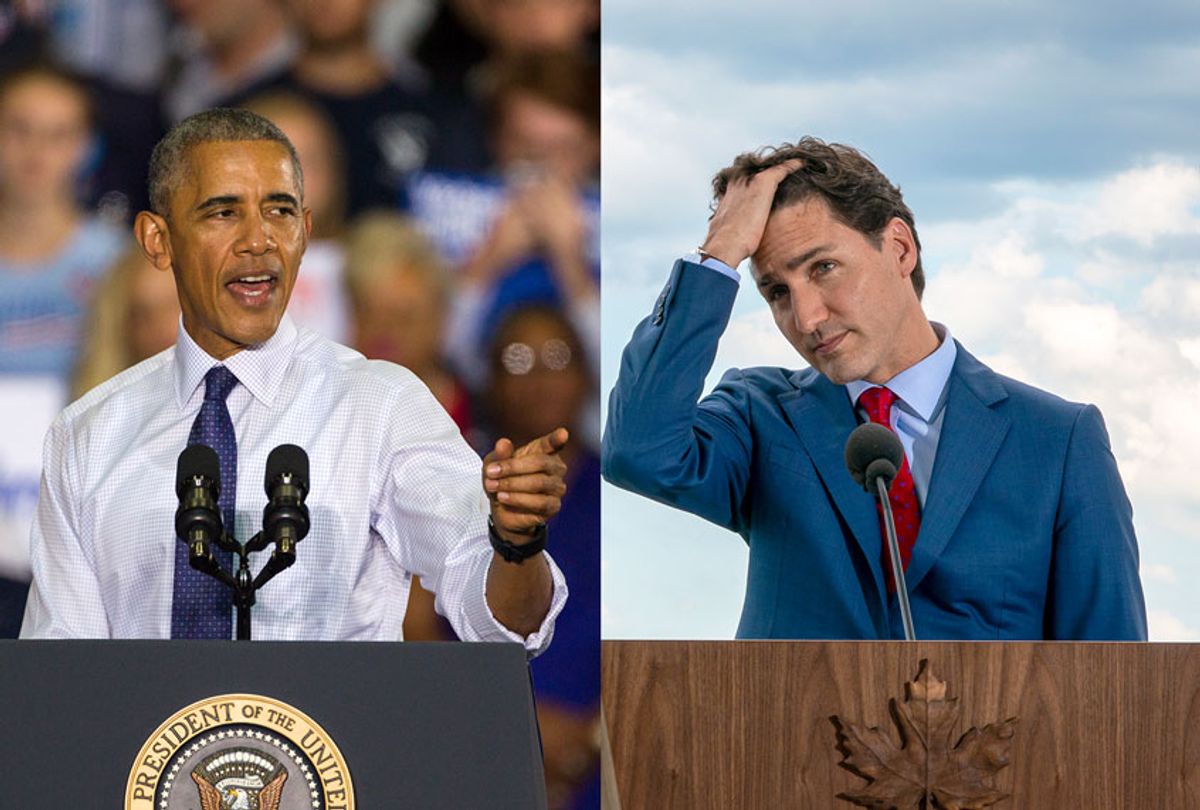 Former President Barack Obama endorsed the world leader for another term in the final sprint to Monday's election in spite of recent revelations that Canadian Prime Minister Justin Trudeau wore both black- and brownface in the past.

“I was proud to work with Justin Trudeau as President,” Obama wrote Wednesday in a tweet. “He's a hard-working, effective leader who takes on big issues like climate change. The world needs his progressive leadership now, and I hope our neighbors to the north support him for another term.”

Trudeau responded to Obama's endorsement by saying, “Thanks my friend, we’re working hard to keep our progress going.”

While some critics attempted to characterize Obama’s tweet as “foreign interference” in Canadian elections, the agency overseeing the country’s elections said it was not inappropriate about foreigners to express a preference regarding the outcome of the upcoming contest.

"Whether expenses were incurred, who incurred them and for what reason would be among the factors that need to be considered before determining if undue foreign influence has taken place," Elections Canada spokeswoman Natasha Gauthier told the BBC.

Obama’s support for Trudeau comes at a sensitive time for the Canadian prime minister, who was once a darling among progressives. Last month, Trudeau’s reputation took a hit after a series of racist photographs and videos surfaced showing Trudeau wearing offensive makeup. One photograph showed Trudeau as a 29-year-old teacher attending an “Arabian Nights”-themed gala in brownface, a turban and robes.

Since then, Trudeau has admitted to dressing up in blackface to perform the Jamaican folk song "Day-O" while in high school, according to the New York Times. The Canadian publication Global News also published a video of Trudeau wearing blackface and an Afro in the early 1990s.

Trudeau joined a long list of politicians who have been revealed to have darkened their skin in past racist incidents in 2019. Although she claims she does not remember doing so, it was revealed that Alabama Gov. Kay Ivey, a Republican, smeared black paint on her face for a comedy sketch while she was a student at Auburn University in the 1960s. While Ivey expressed "genuine remorse" for the incident, she refused to resign, saying: "That happened 52 years ago, and I’m not that person."

Earlier this year, a photograph on Virginia Gov. Ralph Northam's page in his 1984 medical school yearbook was revealed showing one man in blackface and another man in Ku Klux Klan regalia. Although Northam initially admitted to being one of the two people in the photograph, he later reversed that claim. Northam resisted calls for his resignation despite Republicans attacks, which included President Donald Trump.

"Democrat Governor Ralph Northam of Virginia just stated, 'I believe that I am not either of the people in that photo.' This was 24 hours after apologizing for appearing in the picture and after making the most horrible statement on 'super' late term abortion. Unforgivable!" Trump tweeted at the time.

It was later revealed that Virginia Attorney General Mark Herring admitted to appearing in blackface in 1980. At the time, pundits speculated whether Herring would become governor if both Northam and Lt. Gov. Justin Fairfax, who was accused of sexual misconduct, resigned.

In the past, blackface was used in minstrel shows, which demeaned members of the African-American community by playing on racist stereotypes. President Abraham Lincoln and author Mark Twain were both known to enjoy minstrel shows; 11 "Looney Tunes" from the 1930s and 1940s have been pulled because of their use of blackface; and "The Jazz Singer," the first ever motion picture with sound, infamously showed star Al Jolson singing in blackface. Since the mid-20th century, blackface has been increasingly condemned because of its close association with racist oppression. The same is true of brownface, yellowface — putting on makeup to appear Asian — and other forms of racial minstrelry.