Turns out impeachment really does matter: Trump simply can't bluff or BS his way out of the Ukraine fiasco 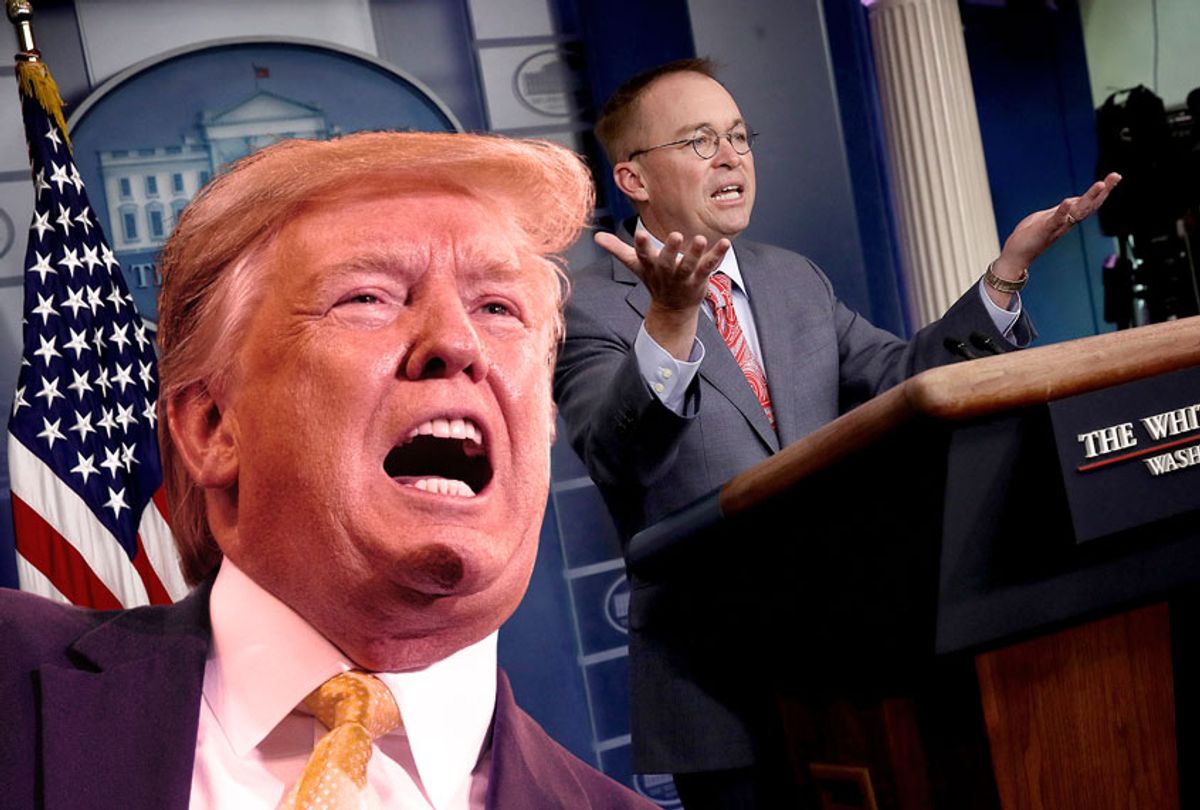 It's easy to see why acting White House chief of staff Mick Mulvaney decided it was time to move to the "brazen it out" phase of the administration's attempts to shut down Donald Trump's Ukraine scandal. The nose-thumbing method of PR has been highly effective for Trump since his campaign days, allowing him to steal the nickname "Teflon Don" from its original owner, infamous mafioso John Gotti. (Whose eventual fate — dying in prison — should, one hopes, give the current Teflon Don the night sweats.)

But this time, it's not working. Now Democrats are running an actual impeachment inquiry, and Trump is having a much harder time shoving this particular scandal down the memory hole.

In the past, striking a "whatcha gonna do about it?" pose has been incredibly effective for Trump at disappearing a daunting number of scandals that could all have led to impeachment, but somehow didn't. The cycle seemed set: Journalists report the latest evil, there's a flutter of outrage, Trump blows it off, and the scandal goes away while Trump emerges seemingly unscathed.

So when Mulvaney told reporters to "get over it" in a White House briefing Thursday, after admitting that Trump had pushed for a quid pro quo with Ukrainian leaders — demanding support for his discredited conspiracy theories in exchange for military aid — you can see why Mulvaney thought that simply blowing it off might work.

But this time, the strategy just doesn't seem to be taking. Instead of treating this like checkmate, as they have in the past, the mainstream media instead treated Mulvaney's comment as what it was: A confession of a crime.

The word "admission" was in the headline at the Washington Post. NPR highlighted the "get over it" phrasing. CNN used the word "confesses" in their headline. Even the New York Times, which tends to soften every bad news story about Trump, went with an unequivocal headline with the words "quid pro quo" in it.

That "lol nothing matters" wasn't going to be the order of the day quickly was apparent to Trump, the White House and his enablers at Fox News, who all grabbed Mulvaney firmly by the shoulders and threw him under the bus with great force. Soon, the acting-and-perhaps-soon-to-be-former chief of staff was desperately trying to claw back his earlier comments, hastily releasing a statement claiming, "there was absolutely no quid pro quo," a direct contradiction of what he said during the press conference, when he stated bluntly that demands for Ukraine to open investigations into Trump's pet conspiracy theories were "why we held up the money."

The timeline of Thursday suggests the likeliest explanation for what happened: In the morning, Trump donor-turned-EU ambassador Gordon Sondland, whose participation in the Ukranian extortion scheme was documented in text messages, testified before a House committee, and it was not good for Trump. Realizing that they couldn't hand-wave evidence of a quid pro quo away, the White House switched to the brazen-it-out method. When it became clear that this was being read as a criminal confession and not a sign of Trump's manly confidence, Trump and his team decided to blame Mulvaney while pretending they had nothing to do with the strategy.

Note, however, that in the same press conference, Mulvaney also used the brazen-it-out strategy to roll out Trump's decision to award a multimillion dollar-contract to himself, announcing that next year's G7 summit will be held at Trump's golf resort in Miami. In this case, the strategy is working, with right-wing media dutifully claiming that all this self-dealing is a sign of genius leadership, and mainstream media outlets refraining from calling this blatant corruption what it is.

This divide, where Mulvaney's Ukrainian confession is reported honestly and without frills, while the G7 scandal gets tiptoed around, shows the power that the impeachment inquiry possesses to shape coverage. That's not just because impeachment is a serious business. It's because impeachment gives mainstream journalists a different way to measure how serious the latest twists and turns of a Trump scandal are.

Before this, not to put to fine a point on it, the benchmark that guided how much weight to give a scandal was whether or not "voters" would care — "voters" being an imaginary white working-class person in a Midwestern diner, as conceived by Beltway journalists — since, in some people's minds, that demographic will solely determine the outcome of the 2020 election.

That the majority of voters — usually between 52% and 55% — of voters consistently disapprove of Trump has been disregarded as unimportant, because most of that majority don't fit that demographic profile. Trump has been able, with a series of yokel-heavy rallies, to maintain the belief that no crime he could commit would ever be enough to move those voters from his side, and so nothing he does ever really matters.

Impeachment, however, creates a different lens through which to look at Trump's crimes and scandals. The question is no longer whether the latest revelation will scandalize Jim Bob sitting in a truck stop, but whether or not it's legally substantive evidence to be included in articles of impeachment. Everything related to this Ukrainian extortion is being viewed through that lens, which means it's getting coverage that treats it as meaningful. (Which, in turn, might mean that Jim Bob himself starts to wonder whether this stuff Trump has been up to is actually serious.)

This shift is evident in the language of reporting, which now focuses on legal questions, rather than primarily political ones. The Washington Post noted that Mulvaney apparently admitted "to several acts that could deepen the legal predicament for the president." Even the New York Times, fatally addicted to framing everything as a "he said, she said" dispute whose facts can never be known, noted that Mulvaney's press conference "could undermine that legal protection" from subpoenas that Trump officials currently enjoy.

After years of hearing the mantra that "impeachment is a political process," maybe the plot twist here is that impeachment was a legal process all along. It's one where evidence and facts actually count for something, beyond how it's playing with Fox News viewers in the Madison suburbs. That may dissipate when it comes to trying this case in the Senate, where the Republican majority will absolutely throw out as much noise as possible to distract from the facts. But even so, the logic of a trial — where evidence is presented in a more linear fashion — will make it harder to pull that trick off.

Impeachment is, after all this time, what it took to start peeling the Teflon off the Don. If Democrats want more of Trump's many scandals to stick, perhaps they should impeach him for those, too.