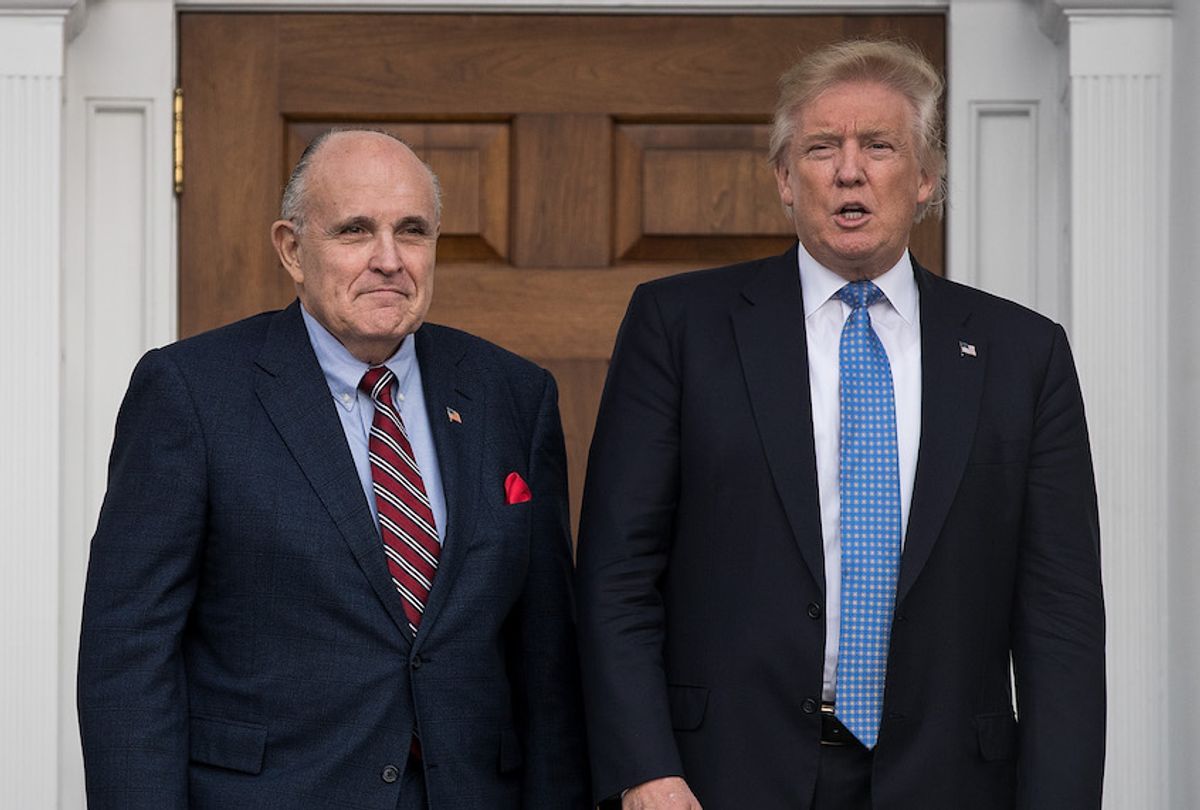 In an usual statement, the Justice Department on Sunday sought to distance itself from Rudy Giuliani, the personal lawyer of President Donald Trump.

The law enforcement agency claimed that Brian Benczkowski, the head of the Justice Department's Criminal Division, and other officials would not have taken a meeting with Giuliani, the former New York City mayor, several weeks ago had it known federal prosecutors in New York were investigating two of his business associates.

"When Mr. Benczkowski and fraud section lawyers met with Mr. Giuliani, they were not aware of any investigation of Mr. Giuliani's associates in the Southern District of New York and would not have met with him had they known," Peter Carr, a department spokesman, said in a statement to the New York Times.

Benczkowski and other Justice Department lawyers reportedly met with Giuliani to discuss a bribery case in which he and other attorneys were representing the defendants.

Prosecutors in Manhattan reportedly informed Attorney General William Barr about the investigation of Parnas and Fruman soon after he was confirmed in February.

In recent weeks, Giuliani has drawn scrutiny for his business activities in Ukraine, which are currently being investigated by prosecutors in Manhattan.

Parnas and Fruman reportedly introduced Giuliani to several current and former Ukrainian officials who provided the attorney with information which claims to be damaging to former Vice President Joe Biden, a leading Democratic presidential candidate.

Parnas, Fruman and Giuliani have emerged as central figures in House Democrats' ongoing impeachment inquiry into Trump. Congressional investigators have subpoenaed documents from the trio relating to their business dealings and communications with Ukraine.

It remains unknown if Giuliani is also being investigated by federal prosecutors.

Earlier this month, John Dowd, a former lawyer for Trump who now represents Fruman and Parnas, linked the men directly to the president, writing in a letter to lawmakers that the pair were assisting Giuliani "in connection with his representation of President Trump."

The Democratic-led impeachment investigation is focused on a July 25 call in which Trump solicited Ukrainian President Volodymyr Zelensky to do him a "favor" and "find out what happened" with the Democratic National Committee's computer server that was hacked by Russians during the 2016 presidential campaign, according to a summary of the call released by the White House.

Trump has repeatedly questioned and attacked the U.S. intelligence community's findings that the Russians hacked and disseminated emails from the DNC and Hillary Clinton in order to help him clinch the presidency. The Justice Department is investigating the origins of the investigation into Russian interference in the 2016 election.

House Democrats are also probing another request the president made on that now-infamous call — that Ukraine investigate Biden and his son, Hunter, who served on the board of a Ukrainian energy company which came under scrutiny for possible abuse of power and unlawful enrichment. There is no evidence of wrongdoing by either Joe or Hunter Biden.

Democrats have alleged that Trump abused his office for personal and political gain. They claim the president violated his oath of office by allegedly soliciting foreign interference in the 2020 presidential election, an allegation which was first detailed in the whistleblower complaint released last month that blew open the scandal and prompted House Democrats to launch an official impeachment inquiry into Trump.