Vindman claimed that Perry was at a meeting where the Biden probe was discussed, which Perry has repeatedly denied 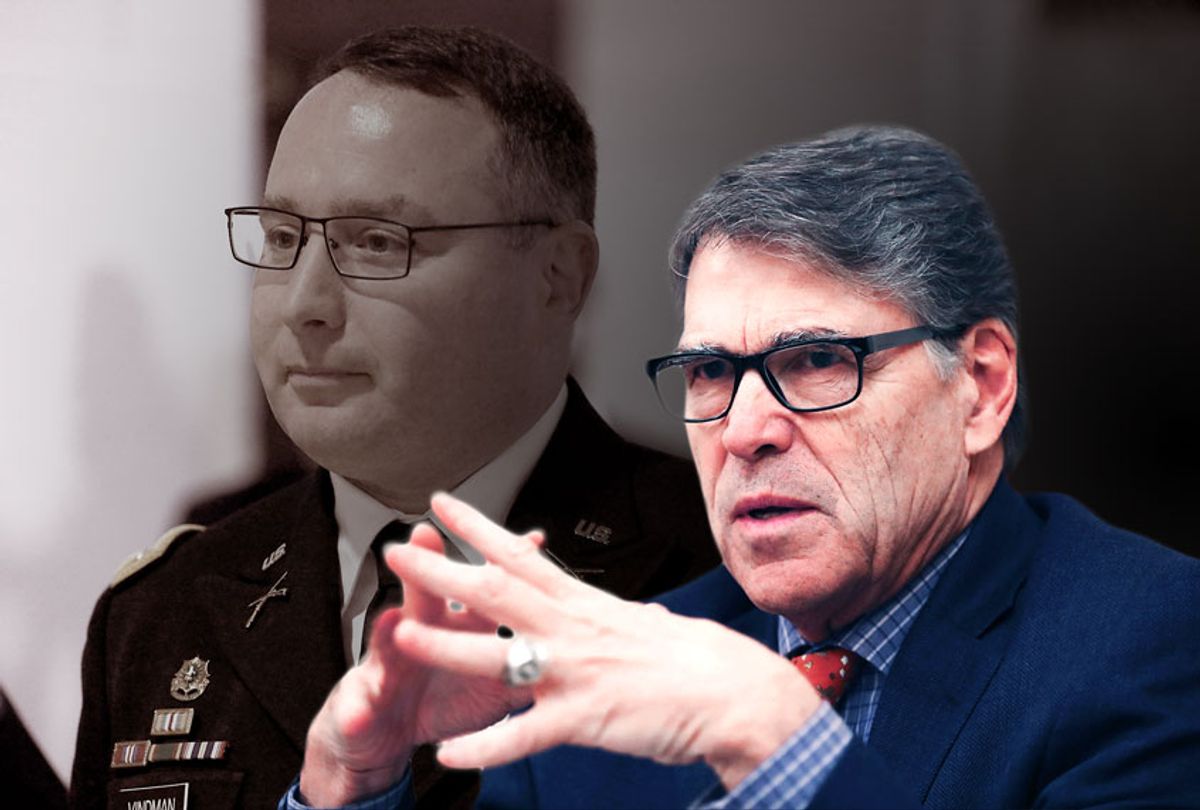 The testimony of a senior White House official appeared to contradict Energy Secretary Rick Perry’s repeated denials that he never heard the Bidens discussed in connection to the administration’s dealings with Ukraine.

Army Lt. Col. Alexander Vindman, the top Ukraine expert on the National Security Council, revealed in his testimony to Congress that he twice reported President Donald Trump’s pressure on Ukraine as a potential national security risk and said that key quotes referring to former Vice President Joe Biden and Burisma, the Ukrainian firm whose board included Biden’s son Hunter, were omitted from the partial transcript of Trump’s July 25 call with Ukrainian President Volodymyr Zelensky. Vindman also contradicted denials Perry made to the press about Biden.

Vindman said in his opening statement that he objected to comments made by Gordon Sondland, the U.S. ambassador to the European Union, at a July 10 White House briefing, which was also attended by Perry. Vindman claimed that Sondland pressed Ukrainian officials at the meeting to investigate the 2016 election, the Bidens and Burisma.

“I stated to Amb. Sondland that his statements were inappropriate; that the request to investigate Biden and his son had nothing to do with national security; and that such investigations were not something the [National Security Council] was going to get involved in or push,” Vindman said in his opening statement.

Vindman also claimed that Fiona Hill, who was then the top Trump adviser on Russia, had told Sondland that his comments were inappropriate.

NBC News reported earlier this month that Hill testified to Congress that she entered the room where the meeting was held as Perry was leaving.

Perry’s reported attendance at the meeting where Sondland allegedly asked Ukrainian officials to investigate the Bidens, according to multiple White House officials, raises questions about Perry’s repeated claims that he never heard Biden mentioned in relation to Ukraine.

"I've probably had as expansive a relationship with Ukraine as anybody in the administration, certainly in the Cabinet-level," Perry told the Christian Broadcasting Network earlier this month. "Not once, as God is my witness, not once was a Biden name — not the former vice president, not his son — ever mentioned.”

Perry repeated that denial in an interview with radio host Hugh Hewitt last week, specifically adding that Sondland had not mentioned Biden either.

“I never heard the word Biden mentioned — not from him, not from staff, not from the EU ambassador, not from Kurt Volker,” Perry claimed. “Never one time was that said.”

An Energy Department spokesperson told Politico, which first flagged the apparent contradiction, that Perry stands by his denials. The spokesperson did not comment on the July 10 meeting mentioned in multiple impeachment depositions.

Perry has announced that he will resign on Dec. 1. He refused to comply with the impeachment inquiry earlier this month.

The July 10 meeting that Vindman referred to took place after an earlier White House meeting that day where, according to Ukraine envoy Bill Taylor, then-national security adviser John Bolton abruptly ended a meeting with the National Security Council after Sondland allegedly brought up specific investigations for Ukraine to pursue in order to secure a long-sought meeting between Zelensky and Trump. Hill later testified that Bolton instructed her to inform White House lawyers that Sondland took Ukrainian officials aside to a private room and specifically referred to an investigation involving the Bidens.

Sondland worked closely with Perry on Ukraine, and previously referred to himself, the Energy secretary and former Ukraine envoy Kurt Volker as the “three amigos” spearheading Ukraine policy.

Renato Mariotti, a former federal prosecutor who now works as a CNN analyst, questioned whether the revelation has “something to do with Rick Perry’s decision to leave the administration.”

“He should be subpoenaed,” Mariotti tweeted.

Perry has already been subpoenaed for documents and refused to comply, though Congress has not subpoenaed his testimony. The New York Times’ Nicholas Fandos reported Tuesday that Congress had issued a subpoena to Perry’s chief of staff, Brian McCormack.

“At least one impeachment witnesses,” Fandos added, “has identified Mr. McCormack as having been intimately involved in many of the events under scrutiny.”