Streaming overview: What HBO Max, Disney+, Apple TV+, and Peacock have to offer

Brace yourself for the streaming wars. Here's a fly-by of the coming SVOD flood 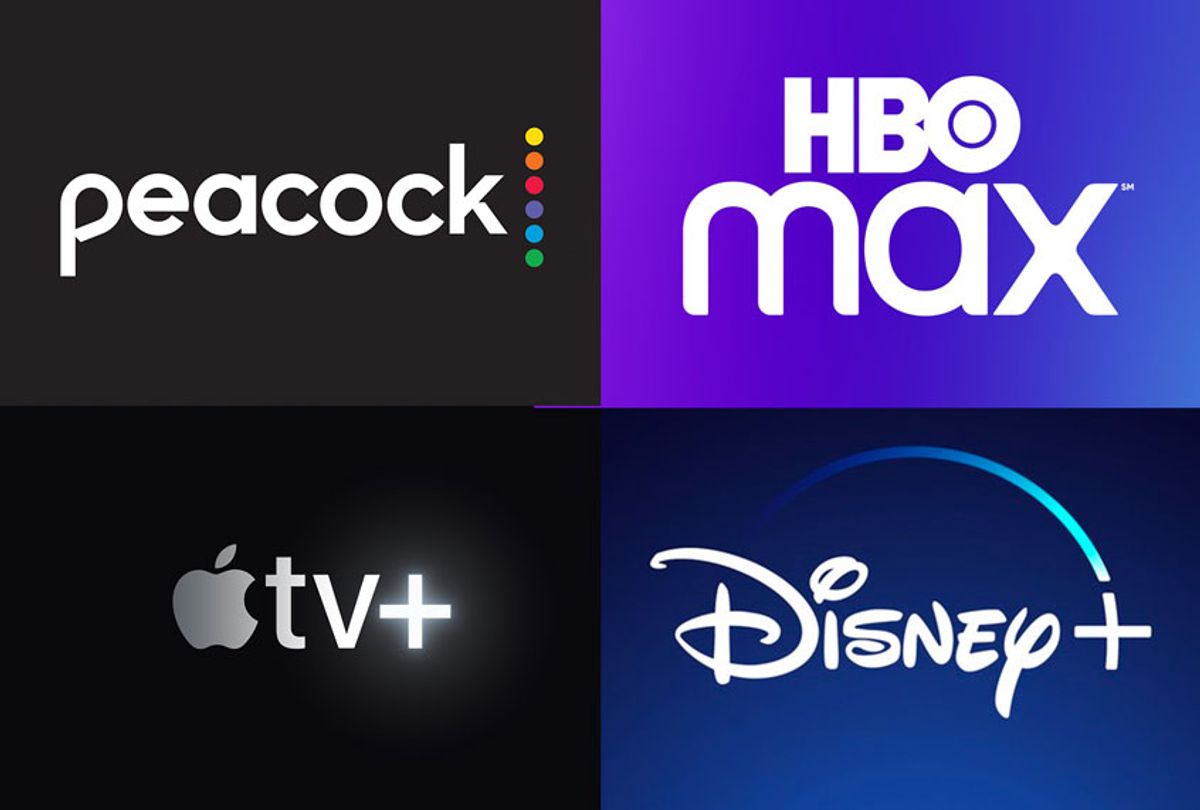 Not so long ago, cord cutting felt like an edge-case proposition for dedicated TV consumers long accustomed to cable packages. True, there's long been grumbling over the fact that so-called legacy pay TV services, cable and satellite, force customers to pay for a lot of channels they don't want or order to access the few they're glued to religiously. The proliferation Netflix, Hulu, and Amazon allowed that to die down a bit, ceding the floor to buzz over skinny bundles.

As many of you may already know and be enjoying, this is the more economical combo of a streaming service with a traditional multi-channel pay platform, enabled by companies such as soon-to-be shuttered Playstation VUE or Sling TV, or extended products from the likes of Hulu (which offers Hulu + Live TV) and DirecTV Now.

But this, as you are likely aware, was all prologue. Now we're bracing ourselves from for onset of the streaming wars.

Referring to the media landscape in aggressive, militaristic terms probably riles up more than a few pacifists.  We get that. One scan of the shifts taking place right however, leaves a person with few other ways to accurately characterize what's going on as anything other than an arms race, only with titles taking the place of weapons.

A market data study released this year from nScreenMedia indicates that around 70 percent of U.S. households have at least one streaming video on demand subscription. (A CBS executive placed the number at 80 percent in an industry press conference that took place in August.) The average American subscriber watches between three and four, paying an average of $8.53 for each. If a customer abandons a subscription, the reason is less about cost than about the inability to find the shows they most want to watch.

So this is why Netflix forked over a massive $100 million to AT&T in 2018 to air "Friends" from one more year – at the end of this one, "Friends" heads over the HBO Max. Perennially popular series like that one  or "The Office" (which Netflix paid dearly to keep until 2021) guarantee a certain amount of worth to a particular service. Ergo, they are key weapons in a service's arsenal.

The new kids on the streaming block

Here's a scan of the front right now. This week, Apple TV+ launches its service with a number of original programs (read reviews of four series here) offered at a cost to $4.99 a month. When Apple first began making noise about heading into TV business, this was big news.

Right now, though? Not so much. The grand opening of Apple TV+ was effectively dwarfed by the news of HBO Max's mind-reeling, gargantuan launch in May 2020, placing a veritable galaxy of offerings from the WarnerMedia universe – as in, HBO, Warner Bros., TNT, TBS, CNN, DC Entertainment, New Line, Cartoon Network, Adult Swim, Turner Classic Movies and more – directly into the hands of consumers for $14.99 a month.

The long-anticipated announcement about HBO Max came Tuesday, proceeded by weeks and weeks of media releases about acquisitions of past titles and future ones from hot talent already in the company stable – including the monster unveiling of a 10-episode, straight-to-series order for the "Game of Thrones" prequel "House of the Dragon," the House Targaryen saga set 300-years prior to the events of "Game of Thrones."

Of course, HBO Max arrives a month after NBC lets Peacock spread its wings for the first time. Debuting in April 2020, the NBCUniversal streaming service will offer both advertiser-supported and subscription-based tiers, and films from the extensive studio libraries of Universal Pictures, DreamWorks Animation, and prestige house Focus Features. A subscription price has yet to be announced.

If you're already paying $12.99 for Netflix – and the worldwide fuss over "Stranger Things" say you probably are – and $11.99 for Hulu, the notion of adding all of these new services on top of what you already have probably feels expensive and daunting.

We can, however, tell you how much Disney+ intends to charge if you want to episodes of "The Mandalorian," the first live-action TV series in the Lucasfilm universe when the service launches on Nov. 12 of this year: a reasonable $6.99 a month. Then again, reasonable is a relative term.

Challengers to the Netflix library

NBCUniversal boasts that it is reclaiming "The Office" from Netflix in 2021, and HBO Max already un-"Friend"-ed Netflix from one of its most widely streamed titles. Marvel already decoupled its TV series from Netflix some time ago; its superheroes, along with all of the "Star Wars" films and Disney's animated films, will be available on its service.

So if you were wondering why Netflix has been cranking out original content with the pacing and accuracy of a Gatlin gun, that's why: the service invested heavily to be out front in this stampede, planting its flag in markets around the world over the past decade and ensuring its app is pre-loaded on flat screen televisions.

However, extensive though Netflix's library may be, it does not have the decades-strong brand power than Disney does, nor the scores of Disney and Marvel films to tempt parents. Disney+ alone is reasonably priced, but a few dollars more – roughly the same price as a Netflix subscription, in fact – subscribers will have access to Hulu and ESPN+, Disney's sports streaming service. That's all fine and good, but the availability of specific titles will be dealmakers here. So it helps to know, for example, that upon the launch of Disney+, users will be able to fry their retinas by streaming as much of the 30 seasons of "The Simpsons" as possible.

HBO Max, meanwhile, is dangling "The Boondocks," "South Park," and "Rick and Morty" as potential lures, and while it may not have the keys to the Disney vault, it will offer on-demand access to a half-century's worth of "Sesame Street" in addition to new seasons and new series from Sesame Workshop.

From what has been announced about the NBCUniversal catalogue to be available on Peacock, its offerings seem more prime-time content focused, and the titles making the most noise may be the announced reboots of "Saved By the Bell" and "Battlestar Galactica" – the latter being re-envisioned by "Mr. Robot" creator Sam Esmail.

And we haven't even gotten into the ramifications for the likes of CBS All Access, which has its own library to call upon, new programming with brand recognition in the form of its "Star Trek" series and its "Twilight Zone" reboot, costs $5.99 for its ad-supported level … and still struggles to be viewed on the same footing as other SVOD peers. (CBS Corporation says it is delivering to 8 million subscribers, including those subscribing to Showtime's direct-to-consumer service.)

To be honest, at the moment we don't have clear answer as to the magic combination of services guaranteed to meet the demands of the broadest possible audience. Nor can one predict with any accuracy which services will survive this escalation of content and services over the next few years.  A commonality with each of these services is that they're connected to a major broadcaster, which ensures that those legacy channels will continue to remain in business.

We can, however, evaluate our own concerns and costs, both to our own wallets and the larger culture's account. A fortunate few will be able to afford all of these services on top of what one assumes would be a much-pared down cable subscription.

One also wonders what everyone else who has to pick and choose between a couple, or even one of these services, will be losing in the balance. All of this entertainment reclamation on the part of Warner, Disney, and the rest stands to deliver a few gut punches to Netflix's bottom line – that's a given. As media companies are pulling their content back inside their own gates, where does that leave the rest of us?

This new world doesn't only affect TV viewers. A recent Vulture article points out that Fox is vaulting many of the titles it used to release to smaller art houses and local festivals, effectively making it that much more difficult for independent theaters to stage, say, a classic horror film festival.

And what about viewers who can't afford any of these SVOD options? Popular as Netflix and Hulu may be in the conversational sphere there are still a good number of people struggling to make ends meet who can't afford them. And brace yourself for the inevitable resurgence of the "Why do we need PBS anyway?" question once Disney+ and HBO Max are up and running and, one predicts, swelling with subscribers who happen to be parents with young children.

Battles and wars are an ugly means of reshaping entire segments of culture and society, and that stands to be true here. As for the casualties, among the first will be my outrageous cable bill. It's about to get a lot skinnier.