"For Schiff, today’s vote was thrilling, in ways that only a court-appointed psychiatrist could fully appreciate" 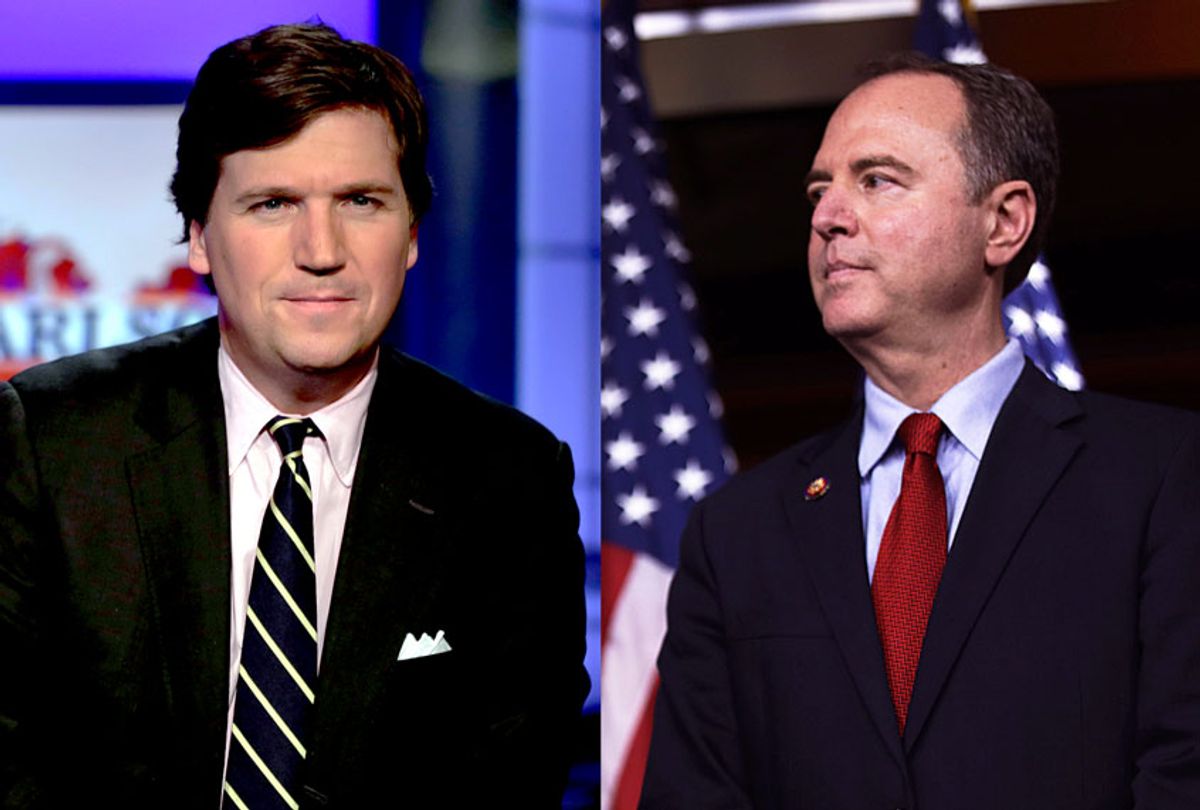 Carlson claimed that Schiff was “ecstatic” that the House of Representatives formally voted to proceed with its impeachment inquiry before attempting a parody of Schiff’s “parody” of President Donald Trump’s July 25 phone call with the Ukrainian president.

“He has spent years obsessing over impeachment like it was a young Jodie Foster,” Carlson said, referencing John Hinckley, who attempted to assassinate former President Ronald Reagan in an effort to impress the actress.

“Colleagues say he has pictures of impeachment taped to the walls of his bedroom he has believed to have written in steamy unhinged letters with his own body fluids," Carlson said. "So, for Schiff, today’s vote was thrilling, in ways that only a court-appointed psychiatrist could fully appreciate.”

Carlson then played a clip of Schiff saying he took “no joy” in the impeachment vote and claimed that the intel chairman was pretending that “it was not the happiest day” of his life.

“In fact, for Democrats, impeachment is like winning the lotto on Christmas,” he said.

Trump and Republicans have obsessed over Schiff’s role in leading the impeachment inquiry and his so-called “parody” of Trump’s call with Ukrainian President Volodymyr Zelensky.

In September, Schiff attempted to get to the “essence” of what Trump told Zelensky “in not so many words” during a House hearing after the White House released its partial call transcript. At least one White House official has since testified that the partial transcript omitted specific references to former Vice President Joe Biden.

“We’ve been very good to your country, very good,” Schiff said, describing the “essence” of what Trump told Zelensky. “No other country has done as much as we have. But you know what? I don’t see much reciprocity here. I hear what you want. I have a favor I want from you, though. And I’m going to say this only seven times, so you better listen good.

Schiff said that his take was “in sum and character what the president was trying to communicate” to Zelensky.

“It would be funny if it wasn’t such a graphic betrayal of the president’s oath of office,” Schiff said. “But as it does represent a real betrayal, there’s nothing the president says here that is in America’s interest after all.”

Schiff later said that his “summary” of the call was “meant to be at least part in parody.”

Trump seized on the incident, claiming that Schiff had misconstrued what the president described as a “perfect” call.

Trump claimed in a tweet that Schiff’s comments “bore NO relationship to what I said” in spite of a memo of the call documenting Trump’s attempt to solicit Zelensky to launch investigations at the behest of Trump attorney Rudy Giuliani, who went on a months-long expedition to Ukraine to find dirt on Biden.

Schiff, meanwhile, vowed to release transcripts from the investigation’s closed-door depositions as early as next week. At least three Trump administration officials who testified in the impeachment probe, one Republican senator and White House chief of staff Mick Mulvaney have all confirmed a quid pro quo between Trump and Ukraine since the partial transcript was released. (Mulvaney has since attempted to walk back that public admission.)

"I think the public will see that the process has been fair. Both sides have had ample opportunity to question the witnesses,” Schiff told CBS News. “I think they will see facts that cause them great concern about the president abusing the power of his office.”