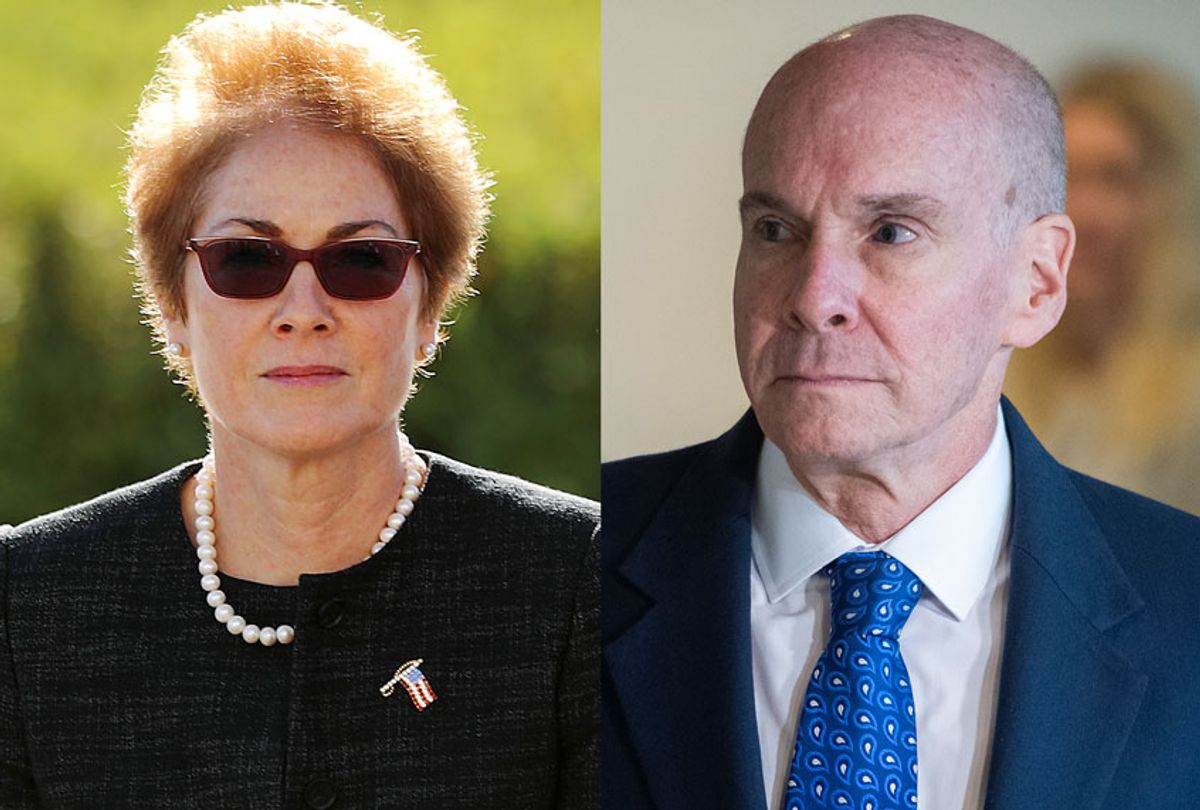 House Democrats on Monday released the first transcripts of closed-door interviews conducted in the impeachment inquiry into President Donald Trump.

The two transcripts include the hours-long testimonies of former U.S. Ambassador to Ukraine Marie Yovanovitch and former State Department official Michael McKinley. They are the first in a series which Democrats said would be released as the inquiry escalates and enters a public phase.

Yovanovitch, who was abruptly recalled from her post in late April 2019, testified to lawmakers last month that U.S. Ambassador to the European Union Gordon Sondland told her she needed to express support for Trump on Twitter if she wanted to save her job, according to the transcript.

She claimed that Sonland told her, "You know, you need to go big or go home. You need to, you know, tweet out there that you support the president and that all these are lies and everything else."

Yovanovitch, a diplomat with more than 30 years in the Foreign Service, was interviewed by House investigators in October for more than nine hours and has emerged as a central figure in the impeachment investigation.

At the heart of the inquiry are allegations that Trump and his evoys leveraged a White House meeting and withheld nearly $400 million in military aid to Ukraine to pressure newly-elected Ukrainian President Volodymyr Zelensky to commit publicly to investigations into both the 2016 election and former Vice President Joe Biden. (Trump has repeatedly denied the existence of a "quid pro quo" and has decried the impeachment investigation as a "hoax.")

In a July 25 phone call with Zelensky, Trump referred to Yovanovitch as "bad news" and said she was "going to go through some things." On that call, Trump solicited his Ukrainian counterpart to open the investigations.

Yovanovitch told lawmakers she felt "threatened" after Trump used her name on the July 25 call with Zelensky.

She left Ukraine in May, months before the end of her diplomatic tenure, after coming under intense scrutiny from right-wing media, who alleged that she had engaged in efforts to undermine Trump's presidency.

Yovanovitch said during her Oct. 11 testimony that after she was abruptly recalled from her post in the spring, Deputy Secretary of State John Sullivan told her that she had "done nothing wrong." However, the president had lost confidence in her. She said in her opening statement that she was "incredulous that the U.S. government chose to remove an ambassador based, as best as I can tell, on unfounded and false claims by people with clearly questionable motives."

Former State Department adviser Michael McKinley testified that one of the reasons he resigned was that he "was 'disturbed' by the implication that foreign governments were being approached to procure negative information on political opponents."

"Inside the building, meanwhile, there was no discussion whatsoever, at least in my presence, by senior State Department leadership on what was developing,” McKinley said.

He also claimed that he raised the idea of issuing a statement of support for Yovanovitch several times with Secretary of State Mike Pompeo, who allegedly never received a "substantive response.”

Pressed on whether it was possible that Pompeo's lack of response could have been due to the fact that Pompeo had not "fully come to grips with how they were going to respond to this inquiry," McKinley said it was "entirely possible.” He added that "this approach . . . was having a negative impact" inside the State Department.

The transcripts were released after the House voted along party lines last week to approve a resolution establishing the procedures of the inquiry. The measure called for public hearings and established their general format. It also allowed the president or his counsel to participate in impeachment proceedings held by the House Judiciary Committee, which has the authority to report articles of impeachment against the president to the full House.

"As we move towards this new public phase of the impeachment inquiry, the American public will begin to see for themselves the evidence that the committees have collected," the three chairs of the committees leading the inquiry said in a joint statement. "With each new interview, we learn more about the president's attempt to manipulate the levers of power to his personal political benefit."

"Ambassadors Yovanovitch and McKinley’s testimony also demonstrates the contamination of U.S. foreign policy by an irregular back channel that sought to advance the president’s personal and political interests and the serious concerns that this activity elicited across our government," they said.

Schiff called the four officials who declined to appear "first-hand witnesses to serious misconduct" adding that their absence would "further add to the body of evidence on a potential obstruction of Congress charge against the president."

Schiff said additional transcripts will be released on Tuesday. They will include interviews with Sondland and Kurt Volker, the former U.S. special envoy for Ukraine.