“I’ve written the whole process off,” Graham said after demanding the transcripts. “I think this is a bunch of BS" 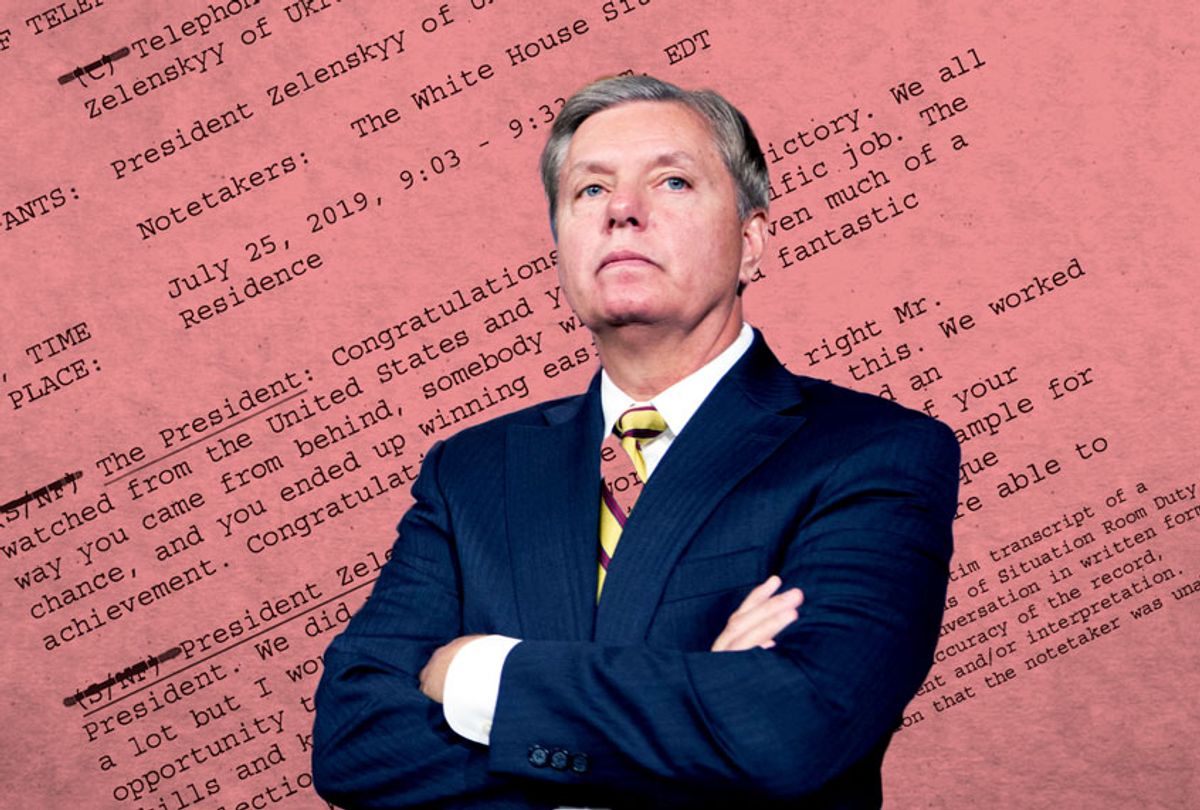 Sen. Lindsey Graham, R-S.C., said he will not even read the transcripts released by impeachment investigators showing that Trump administration officials confirmed that the administration blocked military aid to Ukraine in an effort to pressure them to investigate the Bidens.

After multiple Trump administration officials confirmed that President Donald Trump tried to extort Ukraine into publicly announcing an investigation into a company that once employed Hunter Biden, including Trump’s ambassador to the European Union who revised his previous testimony to confirm a quid pro quo, Graham told CBS News that he will not look at the transcripts released by the House.

“I’ve written the whole process off,” said Graham, the chairman of the Senate Judiciary Committee. “I think this is a bunch of B.S.”

Graham’s refusal to read the transcript came less than a month after Graham demanded the House release full transcripts from the closed-door depositions. Graham also told Axios last month that he would support Trump’s impeachment if he saw that the president “was engaging in a quid pro quo” outside of his July 25 phone call with Ukrainian President Volodymyr Zelensky, which is exactly what Gordon Sondland, the ambassador to the EU, confirmed this week.

Asked about Sondland revising his testimony to explicitly say that hundreds of millions of dollars in aid to Ukraine was blocked to force a public announcement of the investigation over the course of numerous meetings, Graham replied, “Well, that’s his opinion.”

Graham proceeded to suggest that Sondland, a millionaire hotel developer who donated $1 million to Trump’s inauguration before being installed in his post, was just a government “bureaucrat.”

“It doesn’t matter whether he testifies in public or not,” Graham said, adding that the Ukrainian president said Trump did not pressure him during an Oval Office meeting with Trump. “I don’t care what any bureaucrat says."

“So you feel this changes nothing?” a reporter asked.

Graham replied that it was a moot point, because Ukraine “got the money.” He did not mention that the aid was released after months of pressure from members of Trump’s own party and administration to release the aid, which was appropriated by Congress.

“I think this is a sham process,” Graham said. “I think the substance is not worthy of an impeachment decision,” he said, imploring reporters to “read the phone call.” The partial transcript of the call between Trump and Zelensky, which a top National Security Council official testified “omitted” key references to Biden, still showed Trump pressuring Ukraine to work with his lawyer Rudy Giuliani to launch investigations after the administration blocked the aid.

Pressed on whether he believes the witnesses, most of whom were appointed by Trump, Graham again dismissed the issue outright.

“I’m not even interested in the whole concept here,” he said. “This to me is a manufactured issue, created by some unknown whistleblower who needs to be known, and the phone call is the basis for the impeachment allegation."

But multiple witnesses have testified that the effort to extort Ukraine into launching investigations into Trump’s political opponents spanned months and went beyond the phone call, the transcript of which omitted key references to Biden.

Graham quickly came under fire for refusing to read the transcripts of Trump-appointed officials that he personally demanded just weeks earlier.

“I think Lindsey Graham should resign if he’s not going to do his job,” former Rep. David Jolly, R-Fla., told MSNBC. “The chair of the Senate Judiciary Committee —and he said he’s not going to look at the facts of the allegations against the president of the United States? That he worked with a foreign nation to corrupt the domestic elections in 2020.”

Jolly added that if Graham does not do his job he is unfit to be a lawyer.

“If Lindsey Graham is unwilling to do his job, he needs to quit the United States Senate. And he should hand in his bar license to the state of South Carolina,” he said. "We will never understand why Lindsey Graham has abandoned the convictions of old but instead chosen to embrace Donald Trump."

While Graham has repeated Trump’s talking points that the Ukraine pressure campaign was confined to the phone call, which Trump insists was “perfect” despite the reported omissions about Biden, Sondland’s testimony showed that there was a months-long effort spanning numerous meetings to extort Ukraine into investigating the Bidens.

Sondland admitted in his updated testimony to Congress that months after the July call with Zelensky, the “resumption of U.S. aid to Ukraine” was “tied a to a public statement issued by Ukraine agreeing to investigate Burisma,” the Ukrainian firm that employed Hunter Biden.

Sondland said he “conveyed this message” to a top Zelensky aide. The condition “had been communicated by Rudy Giuliani,” he added.

Trump’s defenders, including Graham, have explicitly said such a condition would be highly inappropriate.

“Show me something that . . . is a crime," Graham told Axios last month. "If you could show me that, you know, Trump actually was engaging in a quid pro quo outside the phone call that would be very disturbing."