"We will not permit the outing of the whistleblower," Schiff told Republicans. "If necessary, I will intervene" 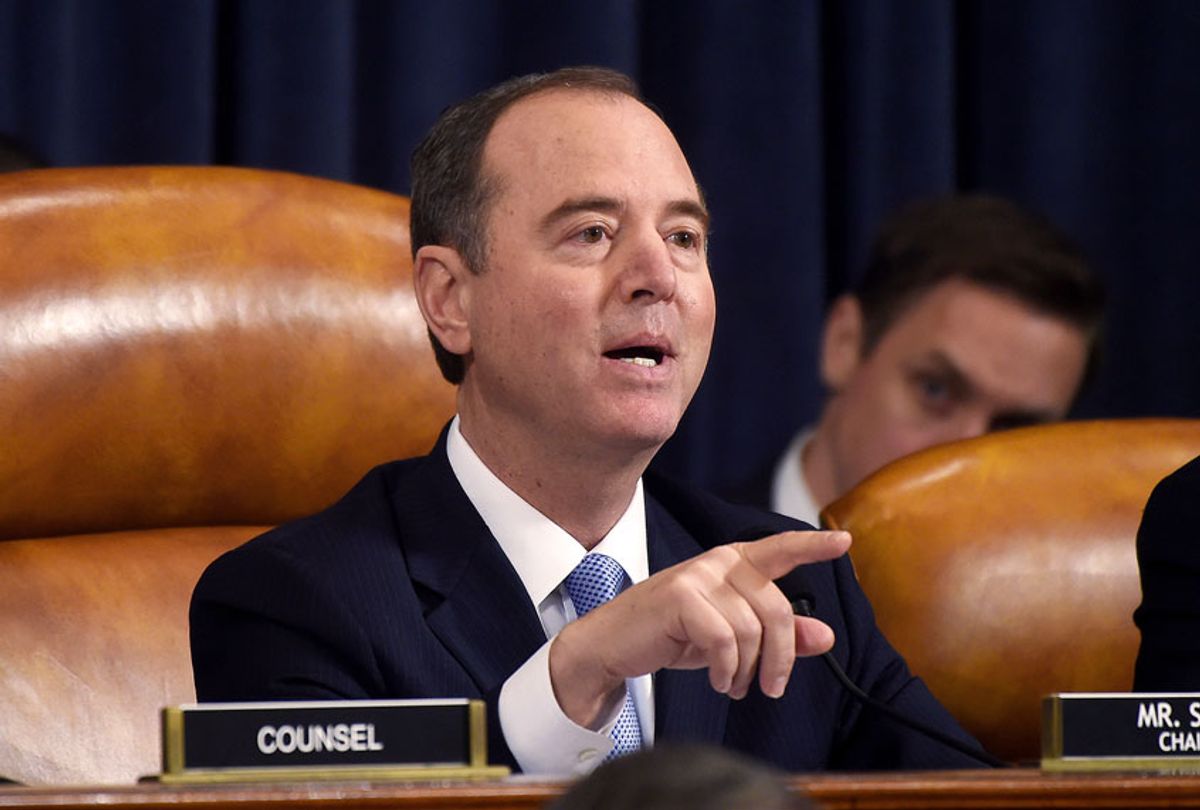 The House Intelligence Committee opened its historic impeachment hearing into President Donald Trump to the public on Wednesday, with the panel's chairman, Rep. Adam Schiff, D-Calif., warning Republicans against disclosing the identity of the whistleblower whose explosive complaint launched the inquiry.

"We will not permit the outing of the whistleblower," Schiff said in response to questions from Republicans on the panel.

"If necessary, I will intervene" to prevent the identity of the whistleblower from being revealed to the public, he added. "Otherwise, I want members to feel free to ask any questions they like."

The whistleblower, who has been rumored to be a CIA employee who worked in the White House, raised concerns about Trump's now-infamous July 25 call with newly-elected Ukrainian President Volodymyr Zelensky. The whistleblower alleged that, during that call, Trump leveraged a potential White House meeting and millions in military aid approved by Congress in an attempt to pressure his Ukrainian counterpart to commit publicly to investigations that would benefit him politically. The White House subsequently tried to cover up those efforts, the whistleblower claimed.

Trump solicited Zelensky to investigate former Vice President Joe Biden, one of the leading contenders in the Democratic presidential primary, and his son, Hunter, during the call. He also requested that Zelensky "do us a favor" and examine a debunked conspiracy theory about Ukrainian interference in the 2016 presidential election.

Acting U.S. Ambassador to Ukraine William Taylor and senior State Department official George Kent on Wednesday became the first witnesses to testify publicly, marking the public phase of an investigation which Trump and Republicans have assailed as a "hoax" and a "sham."

In interviews with lawmakers behind closed-doors, Taylor and Kent claimed that Trump's associates, including his personal attorney, Rudy Giuliani, pursued a shadow foreign policy operation intended to damage the president's political rivals.

Schiff, who opened the hearing by dictating a timeline of Trump's alleged efforts to extort Ukraine, was interrupted early in the hearing by Rep. Elise Stefanik, R-N.Y., about the potential witnesses that Republicans had requested. She then asked whether Schiff would block any questions that GOP members tried to ask during the hearing.

"As the gentlewoman should know, if she were present for the depositions . . . the only times I prevented witnesses from answering questions, along with our counsel, was when it was apparent that members were seeking to out the whistleblower," Schiff responded. "We will do everything necessary to protect the whistleblower's identity, and I'm disturbed to hear members of the committee, who have in the past voiced strong support for whistleblower protections, seek to undermine those protections by outing the whistleblower."

Rep. Jim Jordan, R-Ohio, one of the president's most aggressive and outspoken defenders on Capitol Hill, then chimed in to the back and forth.

"You are the only member who knows who that individual is," Jordan said of the whistleblower, "and your staff is the only staff of any member of Congress who has had a chance to talk with that individual. We would like that opportunity. When might that happen in this proceeding today?"

Jordan was likely referring to uncorroborated claims made by Trump that Schiff "helped write" the whistleblower complaint, which the Democrat has denied. The spokesman for the House Intelligence Committee previously noted that the whistleblower had contacted the panel for guidance, but it did not review or receive the complaint in advance.

"First, as the gentlemen knows, that's a false statement," Schiff fired back. "I do not know the identity of the whistleblower, and I'm determined to make sure the identity is protected."

"You'll have an opportunity after the witnesses have testified to make a motion to subpoena any witness and compel a vote," he added.

Ahead of the open hearings, House Minority Leader Kevin McCarthy, R-Calif., made Jordan a temporary member of the House Intelligence Committee. Jordan is replacing Rep. Rick Crawford, R-Ark., who has previously been critical of Trump and is set to retire at the end of his term.

Schiff detailed the facts of the inquiry that have been established by the witnesses who have already testified behind closed doors in his opening statement. Those facts, he argued, "are not seriously contested." He went on to ask whether those facts suggest that Trump "abused his power and invited foreign interference in our elections."

"The matter is as simple, and as terrible, as that," he continued. "Our answer to these questions will affect not only the future of this presidency but the future of the presidency itself and what kind of conduct or misconduct the American people may come to expect from their commander-in-chief."