GOP members who won't pledge their loyalty to Trump "deserve strong language like that," the White House says 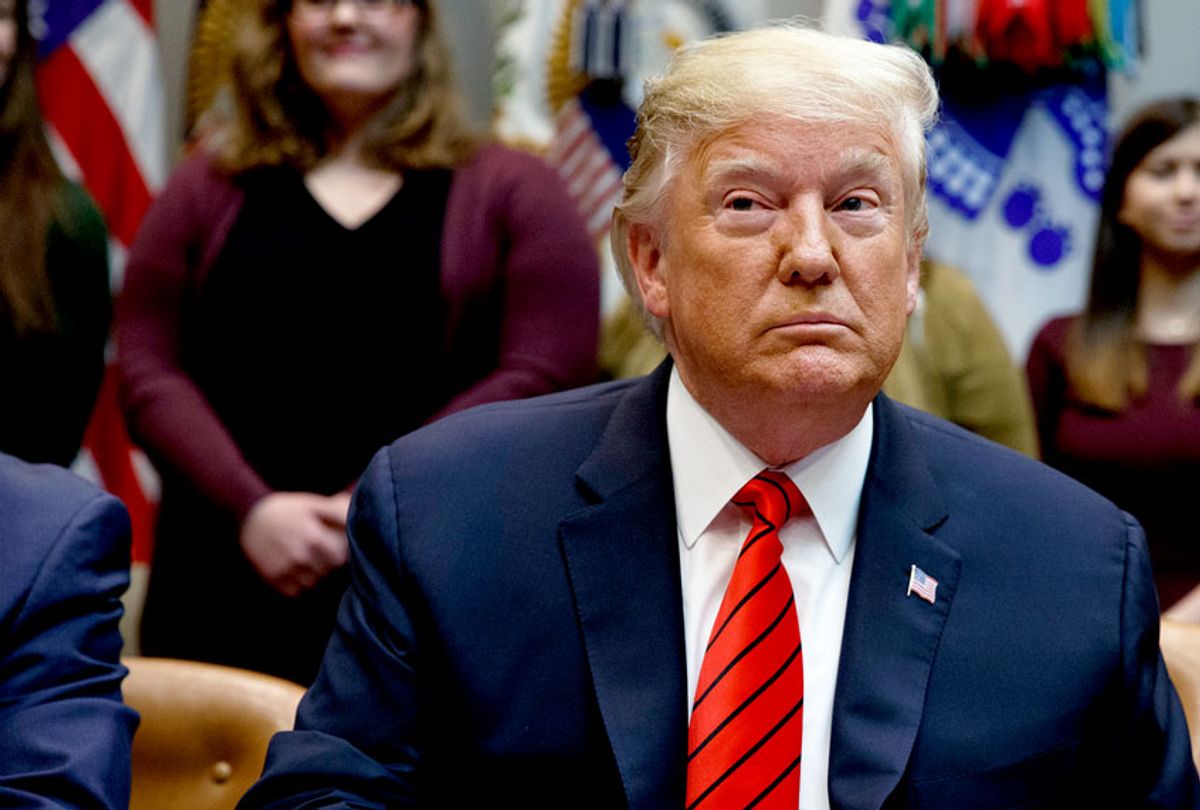 President Donald Trump arrives for an event to speak with Jessica Meir and Christina Koch as they conduct the first all-female spacewalk, from the Roosevelt Room of the White House, Friday, Oct. 18, 2019, in Washington. (AP Photo/Evan Vucci)
--

In fact, Republicans who won't pledge their loyalty to Trump "deserve strong language like that," Grisham declared.

Grisham, who rarely sits for interviews, made the remarks a day after Trump eviscerated Republicans who oppose him and his agenda as he faces an impeachment inquiry in the Democratic-led House of Representatives.

"The Never Trumper Republicans, though on respirators with not many left, are in certain ways worse and more dangerous for our Country than the Do Nothing Democrats," Trump wrote in a tweet, which he pinned to his profile. "Watch out for them, they are human scum!"

He went on to accuse acting U.S. Ambassador to Ukraine William Taylor, a key figure in the impeachment inquiry, of being a "Never Trumper Diplomat," and noted that it would be "really great" if his administration "could stop hiring Never Trumpers," because "nothing good will ever come from them!"

Earlier this week, Trump urged his Republican allies in Congress to "get tougher and fight" as House Democrats press forward with their impeachment inquiry, which blew open last month after a publicly-released whistleblower complaint alleged that Trump had violated his oath of office by urging a foreign nation to interfere in the 2020 presidential election.

The inquiry centers on a July 25 phone call between Trump and Ukrainian President Volodymyr Zelensky. During that call, Trump asked his Ukrainian counterpart to do him a "favor" and "find out what happened" with the Democratic National Committee's computer server that was hacked by Russians during the 2016 presidential campaign, according to a summary of that call released by the White House. Trump also urged Zelensky to connect with his personal lawyer, Rudy Giuliani, and Attorney General William Barr about the request.

Trump has repeatedly questioned and attacked the U.S. intelligence community's findings that Russians hacked and disseminated emails from the DNC and former presidential candidate Hillary Clinton in order to help him clinch the presidency. The Justice Department is investigating the origins of the investigation into Russian interference in the 2016 election.

House Democrats are also probing another request the president made on that now-infamous call — that Ukraine investigate Biden and his son, Hunter, who served on the board of a Ukrainian energy company that came under scrutiny for possible abuse of power and unlawful enrichment. There is no evidence of wrongdoing by either Joe or Hunter Biden.

Democrats have alleged that Trump abused his office for personal and political gain. Trump, meanwhile, has argued his conversation with Zelensky was "perfect," even though he admitted he ordered nearly $400 million in military aid for Ukraine to be withheld in the days before the mid-July call.

Trump has denied that he withheld the aid in order to urge Zelensky to launch an investigation into Biden and other Democrat. But last week, acting White House chief of staff Mick Mulvaney admitted just that — before later walking back his remarks.