The Trump administration attempts to discredit Vindman, even though he still works at 1600 Pennsylvania Avenue 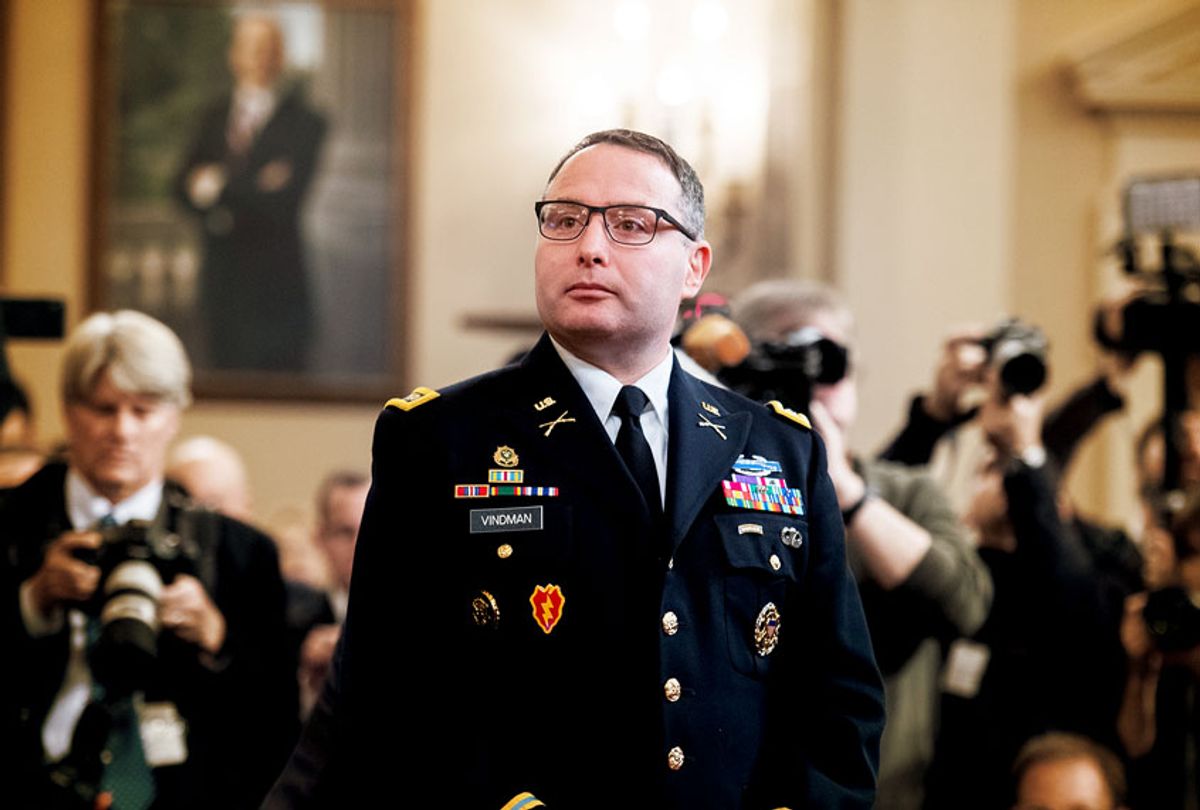 The U.S. Army stepped up protection of Lt. Col. Alexander Vindman and his family as the National Security Council official came under attack from the White House, where he still works.

The White House distributed talking points attacking Vindman on Tuesday, as the Purple Heart recipient testified to the House Intelligence Committee that he twice reported the July 25 phone call on which President Donald Trump solicited Ukrainian President Volodymyr Zelensky to investigate former Vice President Joe Biden as the administration withheld military aid appropriated by Congress, according to The Daily Beast. Vindman still serves as the top Ukraine expert on the National Security Council, but Trump has discussed removing him from the position, CNN reported.

Trump aide Julia Hahn, a Steve Bannon disciple whom he brought to the White House from Breitbart, reportedly sent the talking points to Trump surrogates dismissing Vindman as a disgruntled employee.

“There was nothing wrong with the call with Zelensky at all. Vindman was just upset that President Trump was leading foreign policy instead of sticking to Vindman’s talking points,” one email said. “But it’s not Vindman’s job to set foreign policy. It’s the president’s.”

“Vindman has faced accusations of poor judgment, leaking and going around normal procedures,” Hahn wrote. “There were concerns that Vindman had improperly accessed information he wasn’t supposed to see.”

Vindman addressed these concerns during his hearing when he read a glowing performance review from his boss, former top National Security Council official Fiona Hill.

The attack was amplified by the official White House Twitter account, which quoted from National Security Council official Tim Morrison to attack Vindman.

William Inboden, a former national security aide to President George W. Bush, told The New York Times that “this White House appears to be cannibalizing itself.”

"While many previous White House staffs have feuded with each other and leaked against each other, this is the first time in history I am aware of a White House openly attacking its own staff — especially for merely upholding their constitutional duties,” he added.

Republicans appeared to try to construct a dual loyalty narrative surrounding Vindman, who was brought to the U.S. from the Soviet Union as a toddler. Republican counsel Steve Castor repeatedly pressed Vindman on what he characterized as a job offer to be Ukraine’s defense minister, which Vindman explained was a “comical” exchange with a Ukrainian official that he nevertheless rejected and reported to his superiors.

Vindman hit out at those attacks during his opening statement Tuesday.

“I want to state that the vile character attacks on these distinguished and honorable public servants is reprehensible,” he said. “It is natural to disagree and engage in spirited debate — this has been our custom since the time of our Founding Fathers — but we are better than callow and cowardly attacks.”

Trump avoided directly tweeting about Vindman on Tuesday after Fox News’ pleas for him to avoid making matters worse after he attacked former Ukraine Ambassador Marie Yovanovitch during her testimony on Friday. He did comment on Vindman’s appearance at the hearing during a Cabinet meeting, however, taking issue with his choice to wear his Army uniform even though he wears civilian clothes to work.

“I never saw the man. I understand now he wears his uniform when he goes in,” Trump said. “I don’t know, as he says, lieutenant colonel. I understand somebody had the misfortune of calling him 'mister,’ and he corrected them,” the president added, referring to Vindman correcting Rep. Devin Nunes, R-Calif.

The question was also raised at the hearing by Rep. Chris Stewart, R-Utah. Vindman told Stewart, “I’m in uniform wearing my military rank. I thought it was appropriate to stick with that. The attacks that I’ve had in the press and Twitter have marginalized me as a military officer.”

Those attacks prompted the U.S. Army to increase their protection around Vindman and his family, Army spokeswoman Col. Kathy Turner told ABC News. A U.S. official told Reuters that the Army had carried out security assessments, “since Vindman expressed concerns about his family’s safety.” The outlet reported that Vindman and his family could be moved to a nearby military base if they are determined to be in danger.

Vindman sought to reassure his family during Tuesday’s testimony.

“Dad, my sitting here, in the U.S. Capitol talking to our elected officials is proof that you made the right decision forty years ago to leave the Soviet Union and come here to the United States of America in search of a better life for our family,” he said. “Do not worry, I will be fine for telling the truth.”

Asked later why he felt confident to assure his father, Vindman replied, “Because this is America.”