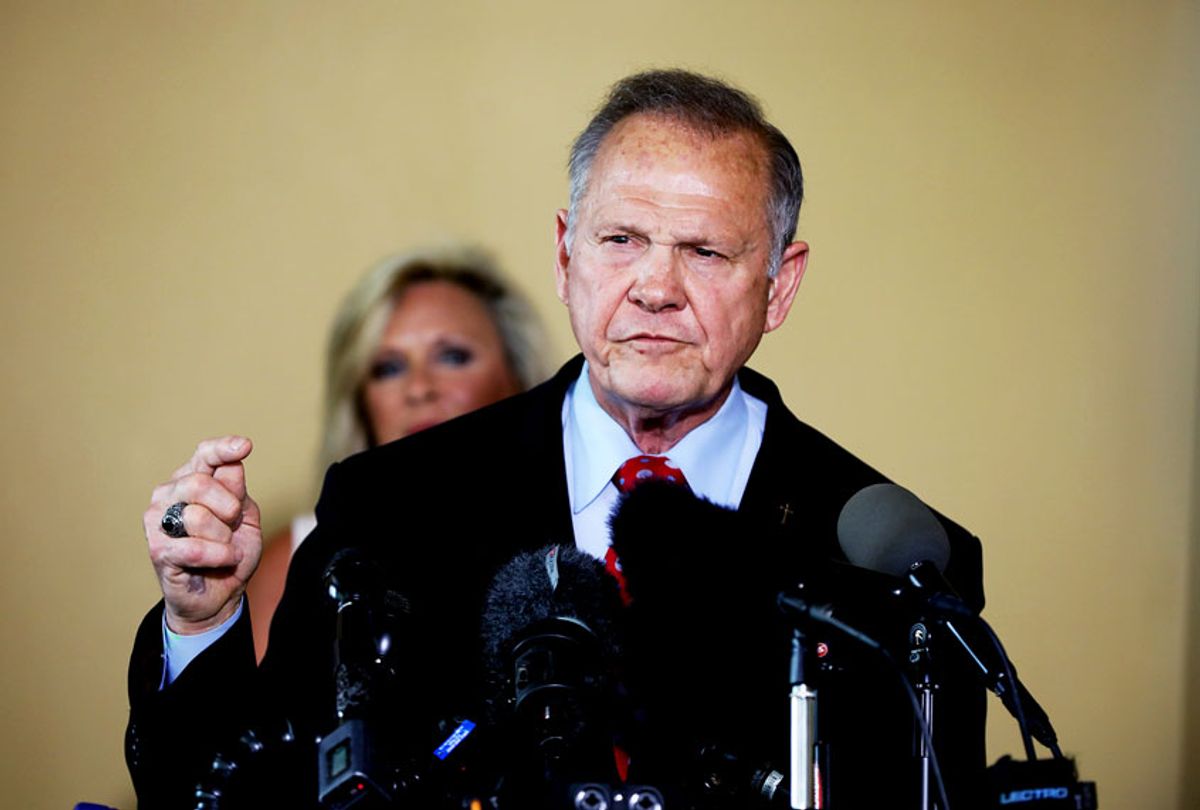 Roy Moore announces his plans to run for U.S. Senate in 2020 on June 20, 2019 in Montgomery, Alabama. Moore lost a special election in 2017 for the Senate seat against Democratic Senator Doug Jones. (Jessica McGowan/Getty Images)
--

Roy Moore, who again seeks Alabama’s Republican nomination for the Senate despite losing the 2017 special election to Democrat Doug Jones, signaled he will continue to bring social issues to the forefront of his campaign after telling the Huntsville Republican Men’s Breakfast group that he wants to return to “moral” times before same-sex marriage, sodomy and abortion were legal.

“We have got to go back to what we did back in the ’60s and ’70s — back to a moral basis. We had abortion laws in our state. We did not have same-sex marriage. We did not have transgender rights. Sodomy was illegal," Moore said. "These things were just not around when my classmates and I went to West Point and Vietnam."

The Republican candidate also denounced “hav[ing] drag queens teaching kindergarten children in this state and this community,” presumably referring to drag queen story hours, and claimed that “gender identity is being taught in California to young kids, and parents have no choice but to let their kids be taught that.”

This is far from the first time that Moore has made controversial comments about the LGBTQ community. He declared earlier this year that he opposes civil unions as well as same-sex marriages, because “if a Christian supports sodomy, I wonder what the reason would be” and invoked an episode of M*A*S*H to explain his rationale for opposing transgender military service.

Moore also claimed, without offering any evidence, that he had been “smeared” as a result of his opposition to LGBTQ rights, telling one audience that "LGBT have an agenda. They won’t even put my name on a billboard now on church, because they would get attacked. Who speaks against LGBT? Tell me the last politician you heard to talk about transgender rights. Even the Supreme Court hasn’t recognized transgender rights."

Moore’s attempt at filling the Senate seat vacated by Jeff Sessions when he became President Donald Trump’s first attorney general failed after multiple women came forward to accuse the Republican candidate of sexual misconduct against them when they were teenagers.

Sessions is currently running to reclaim his old Senate seat, releasing an ad earlier this month in which he said: "When I left President Trump's Cabinet, did I write a tell-all book? No. Did I go on CNN and attack the president? Nope. Have I said a cross word about our president? Not one time, and I'll tell you why. First, that would be dishonorable. I was there to serve his agenda — not mine. Second, the president is doing a great job for America and Alabama, and he has my strong support."

Prior to the allegations of sexual misconduct being revealed, Moore was well known for his extreme conservatism on social issues. He has said that homosexuality should be illegal and called for Christianity to play a direct role in shaping U.S. government policy. He was also removed from the Alabama Supreme Court in 2003 and 2016 for citing his religious beliefs as a reason not to do his job — first for refusing to remove a monument to the Ten Commandments and then for ordering probate judges not to follow the historic Supreme Court ruling which legalized same-sex marriage.

Trump posted a pair of tweets in May urging Alabama voters not to support Moore, whose victory in Alabama prior to the revelation of the misconduct accusations had been considered near certain.

Trump tweeted that "Republicans cannot allow themselves to again lose the Senate seat in the Great State of Alabama. This time it will be for Six Years, not just Two. I have NOTHING against Roy Moore, and unlike many other Republican leaders, wanted him to win. But he didn’t, and probably won’t....."

Moore responded to the tweets by writing, “The president doesn’t control who votes for the United States Senate in Alabama. People in Alabama are smarter than that. They elect the senator from Alabama – not from Washington, D.C.”