Gretchen Carlson slams Sean Hannity for asking Bill O’Reilly to “go back on Fox”: “So f’ed up”

“Mr. Hannity is all but begging his network to rehire an accused sexual predator” 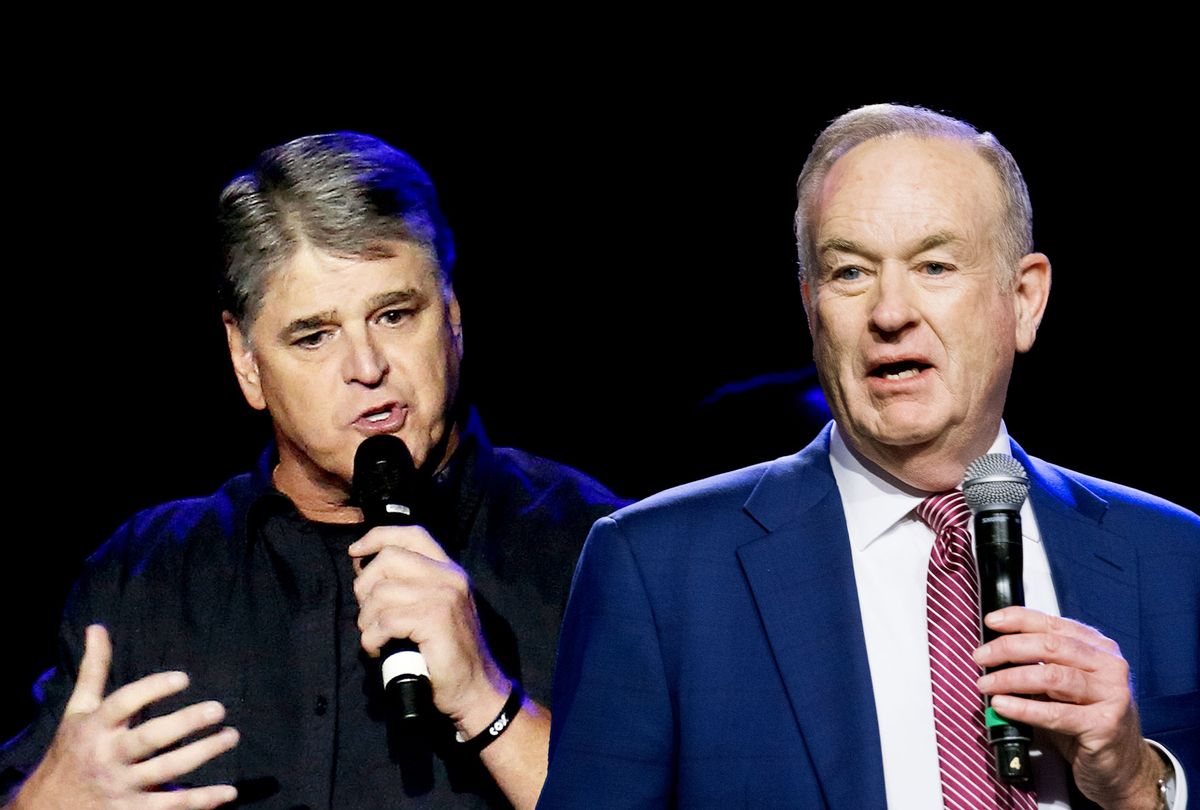 O’Reilly told Hannity that he had attempted to make the interview “a little personal.”

“I said you know, you — you're taking more attack and vitriol than any other president, with the exception of Abraham Lincoln,” O’Reilly said. “And I said, ‘I've seen you show emotion to me when I had never seen that before in 30 years.’ His answer to that is really interesting, because I do believe it's taken its toll on President Trump. But if you read ‘The United States of Trump,’ this statement that I wrote in that book remains true: I have never seen a human being able to absorb more punishment than Donald Trump.”

“So true — it's unbelievable,” Hannity agreed.

“You and I, we can identify, because we've been attacked for more than 20 years,” O’Reilly added. “Each of us has.”

“By the way, I keep offering you — go back on Fox,” Hannity said.

“Why do I want to do that?” O’Reilly asked. “So I can have security guards go with me everywhere like I used to?”

“No, so that you take the No. 1 slot,” Hannity pressed. “We'll end the year again No. 1 in all of cable, and with that comes all the crap associated with it.”

“Your listeners should understand there is a price to pay for being a traditional conservative American in this country,” O’Reilly said.

The price O’Reilly could have been referring to was the millions of dollars to settle multiple sexual harassment lawsuits, which ultimately ended his tenure at the network.

O’Reilly was fired amid an advertiser boycott after The New York Times reported that Fox News had paid millions to former female colleagues to settle complaints against him. The Times later reported that O’Reilly had personally spent $45 million to settle harassment at least six claims against him.

“Every woman and man on this planet should stand up and say WTF is wrong with these people,” she wrote in a statement.

“It is ironic that a man accused of sexual harassment over the course of many years by many different women is being courted to return to Fox News by its most prominent on-air personality, while his victims and other survivors of sexual harassment at that same network continue to be bound by onerous confidentiality provisions that prevent them from disclosing what those harassers said or did to them,” the statement said.

“It is also ironic that many women are bound by no-rehire provisions, which prevent them from getting their jobs back, even as Mr. Hannity is all but begging his network to rehire an accused sexual predator,” they said. “This exchange once again demonstrates how far we have yet to go in ensuring that survivors of sexual assault and harassment are treated with even a modicum of respect and deference that Sean Hannity has shown an alleged sexual predator. We call — again — for Fox News to release all women from their non-disclosure agreements, so that the public can have a much clearer understanding of why Mr. Hannity’s words are so egregious in this respect.”

CNN host Brian Stelter pointed out on Twitter that Trump gave O’Reilly a serious boost by agreeing to be interviewed for his website.

O’Reilly did little to challenge the the repeated false and dubious claims made by the president during the interview.

The host accepted Trump’s claim that he had nothing to do with personal attorney Rudy Giuliani’s efforts to pressure Ukraine to investigate Joe Biden despite copious evidence. O’Reilly similarly did little to challenge Trump’s unfounded claim that liberals “want to change the name” of Thanksgiving.

When Trump announced that he would designate Mexican cartels as terrorist groups, O’Reilly welcomed the move and lamented that “they’ll attack you for that,” referring to Democrats.

Stelter pointed to a single 90-second clip on which “Trump makes multiple false statements,” and “O’Reilly doesn’t call him on any of it.”

Salon has reached out to Fox News for comment.