President Trump throws Giuliani under the bus in Ukraine scandal: "Rudy has other clients"

Trump: "Rudy has other clients, other than me." Giuliani: "My only client is the president" 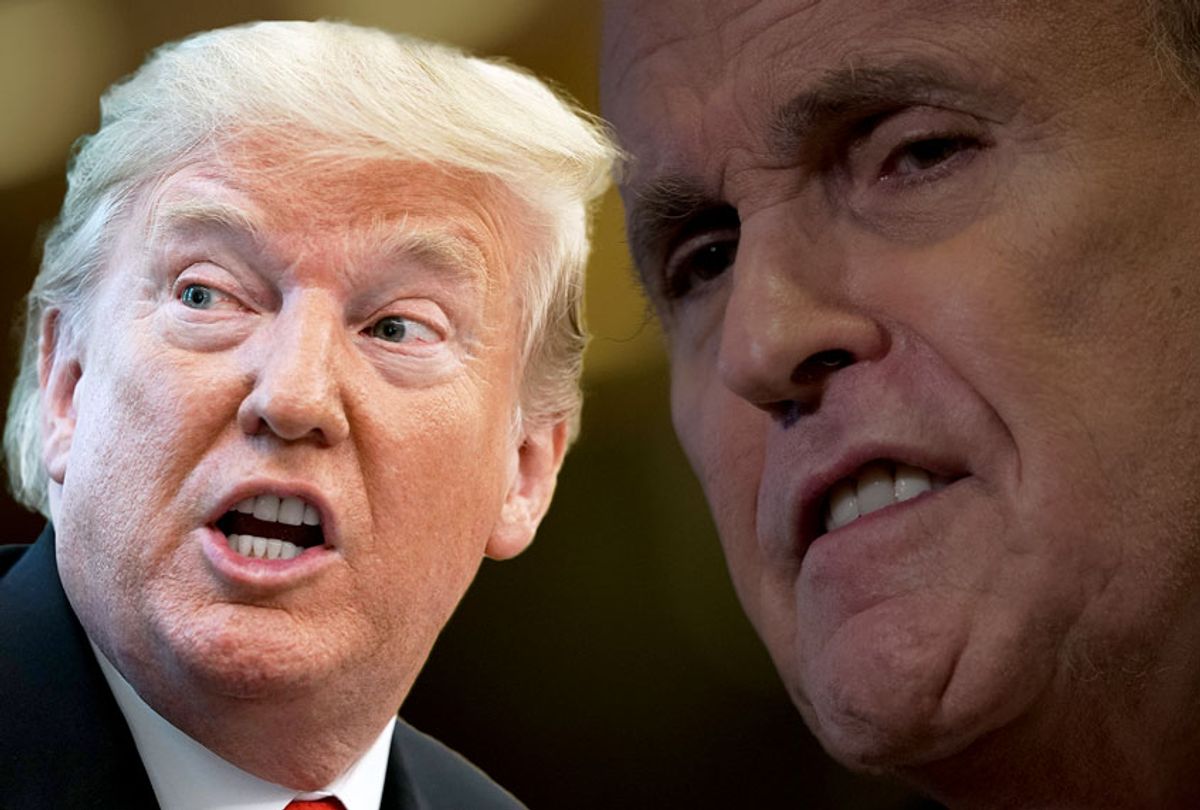 President Donald Trump denied that he had anything to do with Rudy Giuliani’s efforts in Ukraine despite his personal attorney's assertion that he acted on behalf of the president.

Trump told former Fox News host Bill O’Reilly on his web show that he did not “direct” Giuliani to go to Ukraine. O’Reilly asked the president what Giuliani was “doing in Ukraine on your behalf.”

"Well, you have to ask that to Rudy. But Rudy, I don't — I don't even know," Trump replied. "I know he was going to go to Ukraine, and I think he canceled a trip. But, you know, Rudy has other clients other than me. I'm one person."

Trump’s remarks came after multiple House Republicans let slip that they plan to distance the president from Giuliani’s efforts in an attempt to defend him in the impeachment probe.

But Giuliani repeatedly contradicted the president’s new claim for months.

When he planned the Ukraine trip that Trump referred to, Giuliani told The New York Times in May that he was asking Ukraine to investigate former Vice President Joe Biden, because it would be “very, very helpful to my client.”

"My only client is the president of the United States," Giuliani said. "He's the one I have an obligation to report to — tell him what happened."

"Giuliani's your personal lawyer," O'Reilly said. "So you didn't direct him to go to Ukraine to do anything or put any heat on them?"

"No, I didn't direct him, but he's a warrior. Rudy's a warrior. Rudy went — he possibly saw something. But you have to understand Rudy has other people that he represents," Trump said. "He's done a lot of work in Ukraine over the years, and I think — I mean, that's what I heard. I might have even read that someplace.”

Nonetheless, a White House memorandum of the July 25 call at the heart of the imeapchment inquiry against Trump revealed that the president solicited Ukrainian President Volodymyr Zelensky to work directly with Giuliani and Attorney General Bill Barr on investigations which could benefit him politically.

"Mr. Giuliani is a highly respected man. He was the mayor of New York City — a great mayor— and I would like him to call you,” Trump told Zelensky according to the partial transcript of the call released by the White House. “I will ask him to call you along with the Attorney General. Rudy very much knows what's happening, and he is a very capable guy. If you could speak to him that would be great."

Trump publicly said that if Ukraine “were honest about it, they'd start a major investigation into the Bidens."

Giuliani made clear earlier this month on Twitter that his Ukraine investigation “was done solely as a defense attorney to defend my client against false charges.” Giuliani made that statement after hiring his own lawyer as he faces multiple federal investigations stemming from his work in Ukraine and elsewhere.

Trump’s claim is also contradicted by multiple administration officials who publicly testified to the House Intelligence Committee this month.

Gordon Sondland, who was appointed as the ambassador to the European Union after donating $1 million to Trump’s inauguration, testified that Giuliani attempted to arrange a “quid pro quo” with Ukraine to pressure them to investigate the Bidens and a baseless conspiracy theory about a nonexistent Democratic National Committee server.

“Mr. Giuliani was expressing the desires of the president of the United States, and we knew that these investigations were important to the president,” Sondland told the committee.

Diplomat David Holmes testified that Trump personally called Sondland one day after his call with Zelensky to check in on the status of the “investigations.”

Giuliani, meanwhile, appears to be going along with Trump’s new defense, even though federal prosecutors predict it could backfire.

"The president never sent me to Ukraine,” Giuliani told CBS News. "I have not been in Ukraine for two years and never pressured anyone."

However, his indicted associate Lev Parnas has claimed that Trump and Giuliani personally directed him to pressure Ukraine to investigate Biden and offered to testify under oath about his account.

Mimi Rocah, a former assistant U.S. attorney at the Southern District of New York — which Giuliani once ran and is now investigating him — predicted that this strategy would not go well for the president’s lawyer.

"He can go along with that for a while, but at some point that means that Giuliani is essentially being implicated in a bribery conspiracy by the president of the United States,” she told MSNBC. “He has just implicated Giuliani.”

Rocah pointed to a Wall Street Journal report which revealed that federal prosecutors had issued subpoenas as they pursue information into Giuliani and his consulting firm, indicating eight potential criminal charges are under consideration. Those include: obstruction of justice, money laundering, conspiracy to defraud the United States, making false statements to the federal government, serving as a foreign agent without registering, campaign finance violations, mail fraud and wire fraud.

"When you see a subpoena with eight different crimes listed on it, that's very telling. Look, Rudy Giuliani, as far as I can tell, is up to his eyeballs in crime,” Rocah said. “We don't like to try and make predictions, but I would be surprised at this point if Rudy Giuliani didn't get indicted. Like I said, that subpoena with eight crimes on it seems very specific— very far along — to me. And just the reporting that we're hearing — you know, there's a lot of smoke there."

Republicans in Congress have zeroed in on reports that Giuliani may have stood to personally profit from his efforts in Ukraine to suggest that he was acting on his own. Republican counsel Steve Castor appeared to be referring to reports during last week's impeachment hearings that federal prosecutors in New York are investigating whether Giuliani stood to personally profit from a Ukrainian energy firm pushed by his indicted associate.

Rep. Doug Lamborn, R-Colo., publicly claimed that “Giuliani was "off on his own mission doing things that people didn't know about.” Multiple anonymous Republicans told The Washington Post that Giuliani’s “business interests in Ukraine” suggest that he was “motivated by personal gain”— not “loyalty to Trump.”

Top House Republicans told Axios that “Rudy will be cut loose because he was rogue.”

Former U.S. Attorney Barbara McQuade predicted to MSNBC that “it’s only a matter of time” before Trump “claims he doesn’t even know who Rudy Giuliani is" with prosecutors closing in on his attorney.

Even if Trump cuts ties with Giuliani, as he did with former longtime lawyer Michael Cohen, it could not be enough to counter the evidence Democrats have already compiled in the case.

“I think Trump would throw [Giuliani] under the bus in a split second and wouldn’t think twice about it,” former Clinton administration aide Kirsten Powers said on CNN. “I don’t think, however, that even throwing him under the bus gets Trump out of this, because there is too much evidence showing that he was driving this bus, basically.”