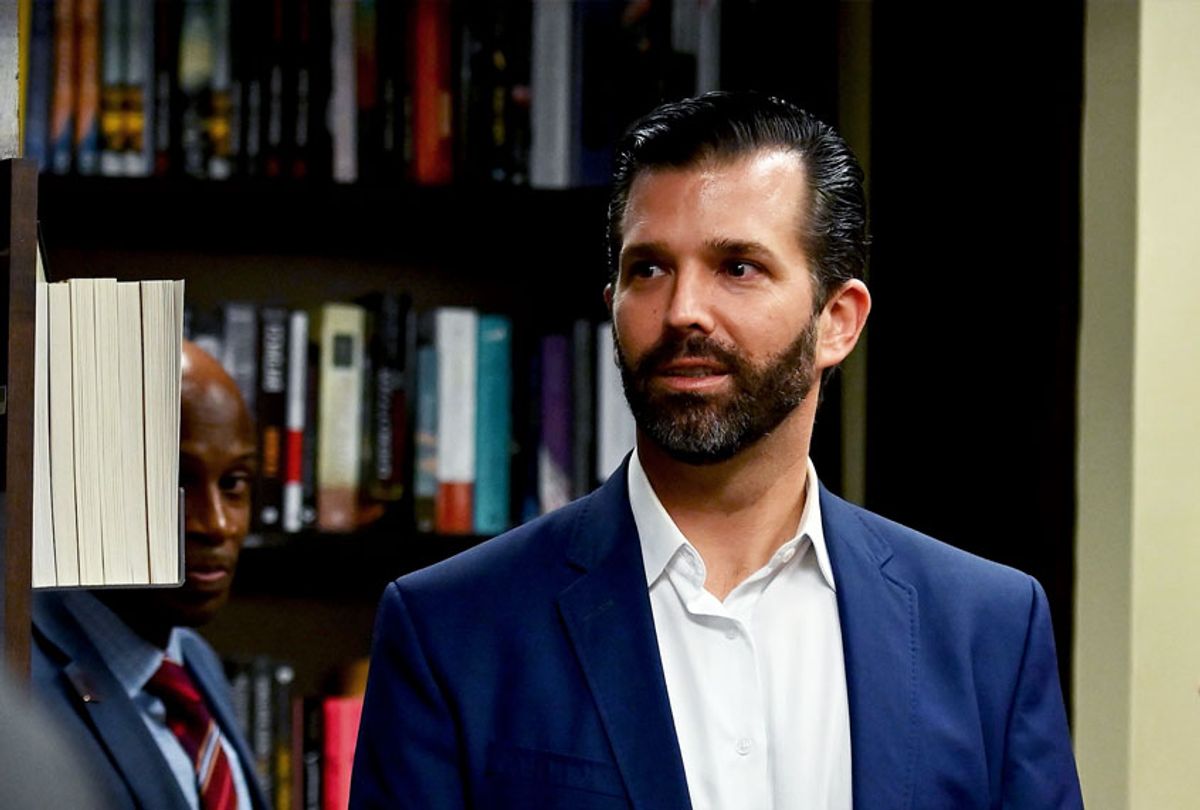 A book by an anonymous White House official who claimed to be “part of a resistance” inside the Trump administration knocked Donald Trump Jr.’s book off the No. 1 best-seller spot even after Republican allies boosted sales of "Triggered" by stockpiling copies.

“A Warning,” the book by the anonymous senior White House official who penned a cryptic New York Times op-ed last year, knocking Don Jr. from the top spot as it debuted at No. 1 this week, according to the outlet.

Don Jr.’s book also debuted at No. 1 when it was released, though the book title was accompanied by a small dagger symbol on the New York Times Bestseller list, which denotes “institutional, special interest, group or bulk purchases.”

Though the Republican National Committee denied making a “large bulk purchase” of the book, New York Times reporter Nick Confessore published a Federal Election Commission disclosure revealing that it spent nearly $100,000 to buy up thousands of copies of the book.

“Here’s a pic I was sent of boxes of ‘Triggered’ sitting in the offices of Turning Point USA, a student group with close Trumpworld ties,” he tweeted along with a photo of dozens of boxes of books lining the walls of an office.

Turning Point USA bought up about 2,000 copies of the book, which it stored in a little-used office under a poster reading “Capitalism Not Cronyism,” The New York Times reported.

It was one of nine Republican groups, candidates or advocacy organizations which helped boost Don Jr.’s book with large sales, according to FEC filings and documents obtained by the outlet.

Individual Republicans have also pushed the book. Rep. Matt Gaetz, R-Fla., appeared at a book tour stop for Don Jr. and promoted the appearance to his campaign mailing list. A super PAC for House Minority Leader Kevin McCarthy, R-Calif., offered free copies of the book to anyone who donated at least $35.

State Republican Party organizations in Texas and Arizona also promoted Don Jr.’s book tour to their mailing lists. The Texas Republican Party bought copies of the book to give “as a gift to each of the attendees,” a party spokesman told The Times.

Andy Surabian, a spokesman for Don Jr., insisted to The Times that the bulk sales were not a factor in the book’s No. 1 debut.

“In its opening week, ‘Triggered’ outsold its closest competition by roughly 40,000 copies and clearly would have been No. 1 on the NYT list without the copies sold thru the RNC and other GOP-aligned organizations,” he said. “Don is proud of the fact that the demand for ‘Triggered’ has been so high that it has allowed groups like the RNC, NRSC and the NRCC to net hundreds of thousands of dollars through their marketing of the book.”

Though it is not uncommon for political groups to boost book sales, some publishers call the practice unfair to authors who rely on organic sales.

“The fact that it is preventing other authors from getting the recognition that they should rightfully be receiving is a bit unfair,” Morgan Entrekin, the CEO of publisher Grove Atlantic, told The Times.

Though some of the groups bought the books directly from the publisher, the RNC and others bought up thousands of books at retailers. The RNC bought up their thousands of copies through Books-a-Million.

A New York literary agent told BuzzFeed News that the purchase suggested that the RNC was trying to game sales of Don Jr.’s book.

If the RNC "just wanted books to resell, they could have gotten them for less money, direct from the publisher," the agent said. "They spent more of donors' money to buy them from BooksAMillion, clearly in an effort to look like 'real' sales."

It is a strategy which the president has used to boost sales of his books, like “Art of the Deal.” The Trump Organization was tasked with purchasing “tens of thousands of copies” of the book after its release, former company executive Jack O’Donnell wrote in his 1991 tell-all “Trumped!”

Don Jr.'s book includes an assortment of grievances against the American left.

“A victimhood complex has taken root in the American left,” Don Jr. writes before complaining about critics who call his father racist, comparing the investigation into his campaign’s ties to Russia to the FBI smear campaign of Martin Luther King Jr.

Don Jr., whose Instagram bio describes him as a “general in the meme wars,” goes on to liken his family’s sacrifices to those of fallen soldiers while describing a trip he took to Arlington National Cemetery with his father.

“In that moment, I also thought of all the attacks we’d already suffered as a family and about all the sacrifices we’d have to make to help my father succeed — voluntarily giving up a huge chunk of our business and all international deals to avoid the appearance that we were ‘profiting off the office,’” he wrote. "Frankly, it was a big sacrifice, costing us millions and millions of dollars annually . . . Of course, we didn't get any credit whatsoever from the mainstream media, which now does not surprise me at all.”