“Putin does hate America. You . . . help his anti-American objectives with these ill-informed rants” 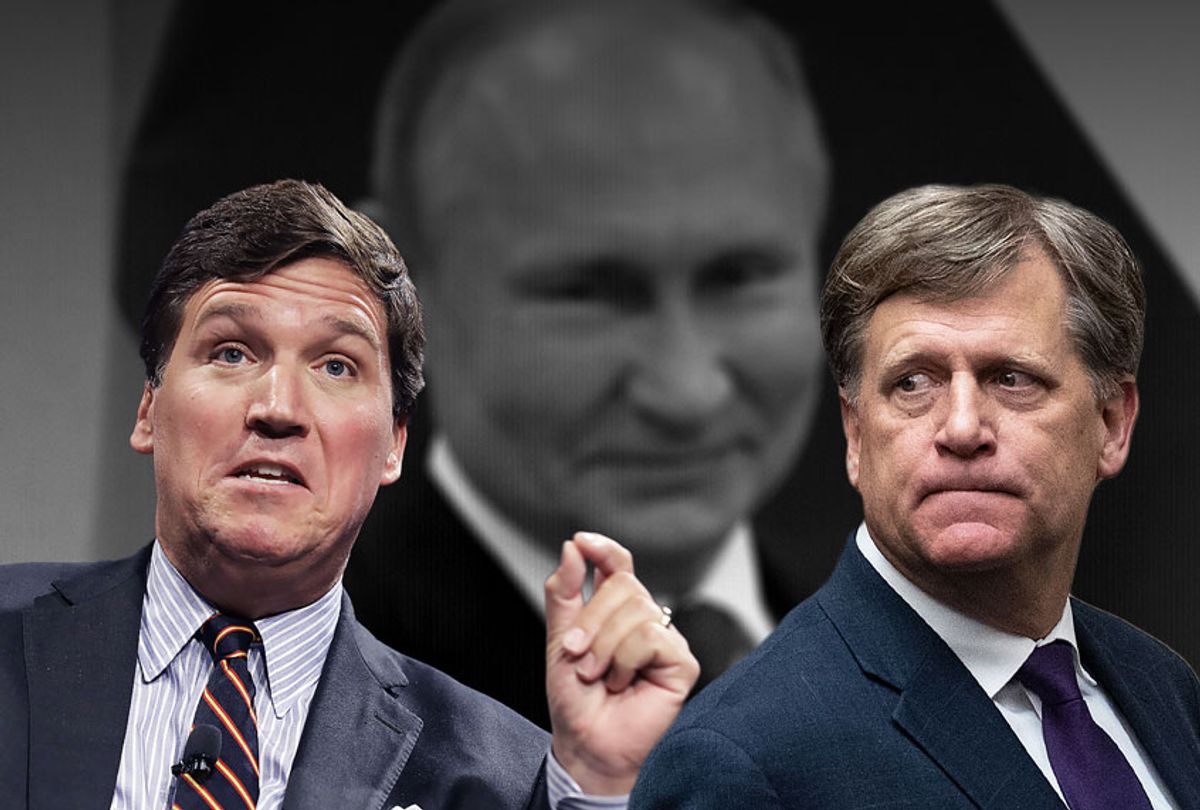 Ambassador Michael McFaul, who represented the U.S. in Russia under President Barack Obama from 2012 to 2014, criticized Fox News host Tucker Carlson for claiming that Russian President Vladimir Putin does not hate America.

“I speak Russian. I know Russia. I've lived there for 8 years of my life,” McFaul tweeted Tuesday morning. “You are wrong Mr. Carlson. Putin does hate America. You (I assume unwittingly) help his anti-American objectives with these ill-informed rants. Be a patriot. Stop attacking Americans & defending Putin.”

McFaul included a link to a clip of Carlson dismissing the supposed “Russia collusion hoax” as a delusion of the left, telling his viewers on Tuesday night that “the irony, of course, is that Putin, for all his faults, does not hate America is much as many of these people do. They really dislike our country. And they call other people traitors, because they’re mouthing the talking points of Putin.”

“Obviously, there has been a turn toward Russia apologism [due to] the Mueller Report about Russia intervention in the 2016 election and leading now to the Ukraine impeachment hearings,” A. J. Bauer, a visiting assistant professor of media culture and communication at New York University, told Salon. “But I think an important point is that Fox News’ pandering to Putin, and celebrating Putin as a strong leader, actually long predates the Trump era. You can look back to earlier this decade, back to 2012 and 2014 — this was around the time when Putin was becoming president again after that little detour as a prime minister — and Putin was producing these propaganda images where he was shirtless riding a horse and all of this proto-masculine imagery.”

Bauer also noted that Fox News has depicted Obama as effeminate by showing him wearing dad jeans and eating dijon mustard. He argued that contrasting Obama with the Putin propaganda was meant to reinforce Obama’s supposedly insufficient masculinity.

This is not the first time that Carlson seemed to display pro-Russia views on his program. Last month, he asked a guest who discussed Russia’s invasion of Ukraine, “Why do I care? Why do I care what's going on in the conflict between Ukraine and Russia?”

After his broadcast ended, Carlson argued that his earlier comments had been intended as a “joke.” He added that he was “only rooting for America” and said what he did before because he was “mocking the obsession many on the left have.” He also told Fox News host Sean Hannity as he turned the broadcast over to him that “I rooted against Russia when it mattered, by the way.”

Fox News did not return a request for comment, while McFaul declined to be interviewed for this article. In an interview with Salon earlier this year, the former ambassador described an “ideological affinity” between Trump and Putin.

“They're both kind of a self-styled conservative, self-styled nationalist, anti-multilateralist, kind of ‘nation-state should come first,’” McFaul told Salon in January. “I think that ideological affinity is also something that's radically new in the era that we live in — not unlike the intellectual affinities that you had from people on the left with communist organizations and communist countries during the Cold War.”