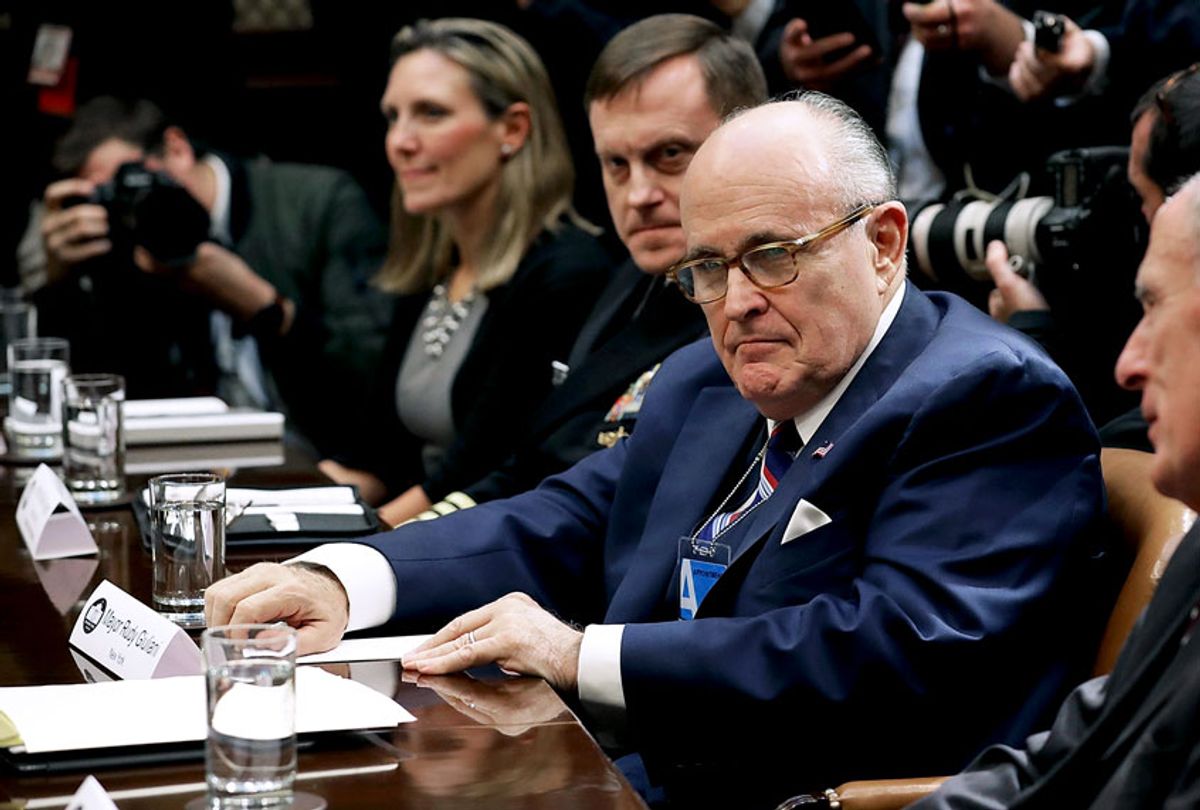 As House Democrats continue to scrutinize Rudy Giuliani's role in the Ukraine scandal, the former New York mayor has reportedly been in Europe continuing efforts to solicit information which he hopes will undermine the case for the impeachment of his client, President Donald Trump.

The former prosecutors, all of whom have faced allegations of corruption, have reportedly bolstered unsubstantiated claims about former Vice President Joe Biden and his son, Hunter; former U.S. Ambassador to Ukraine Marie Yovanovitch; and Ukrainian interference in the 2016 presidential election.

Those allegations are at the heart of the impeachment inquiry against Trump. House Democrats have alleged that the president attempted to leverage a White House meeting and millions in military aid, sought by Ukraine in the face of Russian aggression, to pressure Ukrainian President Volodymyr Zelensky to investigate the Bidens, as well as a baseless theory that the Ukrainian government had conspired with Democrats to interfere in the 2016 presidential election. Lawmakers have also accused Giuliani of spearheading a shadow foreign policy campaign in Ukraine in an attempt to boost Trump's re-election efforts.

Giuliani's European trip was reportedly organized around the filming of a documentary series promoted as an alternative to the Democrats' impeachment narrative. The series, which features Giuliani, is being produced and aired by the pro-Trump media outlet One America News.

Notably, it was Giuliani's earlier communications with some of the same Ukrainian officials which prompted the impeachment inquiry, as well as an investigation by federal prosecutors into whether the former New York mayor broke federal lobbying laws in his dealings with Ukraine.

Giuliani, however, rejected any notion that it was risky for him to continue advancing the president's interests in Ukraine, given the scrutiny on him by impeachment investigators and federal prosecutors in the Southern District of New York, the office which he himself ran from 1983 to 1989.

"If SDNY leaks and Democrats' threats stopped me, then I should find a new profession," Giuliani told The Times, adding that "like a good lawyer, I am gathering evidence to defend my client against the false charges being leveled against him" by the media and Democrats on Capitol Hill.

The news of Giuilani's trip follows reports from The Times and The Washington Post that the former New York mayor was pursuing thousands dollars in business from Ukrainian officials, including Lutensko, during the same months in which he was working to gather damaging information on Trump's political rivals. However, there is no indication that Giuliani was ever paid by Lutensko or other Ukrainian officials.

It also comes a day after the House Intelligence Committee released its impeachment inquiry report, which revealed that Giuliani was in frequent contact with the White House during key moments in the Ukraine scandal.