Ingraham attacks Thunberg's selection as “Person of the Year” on Fox: Nunes would be a better choice 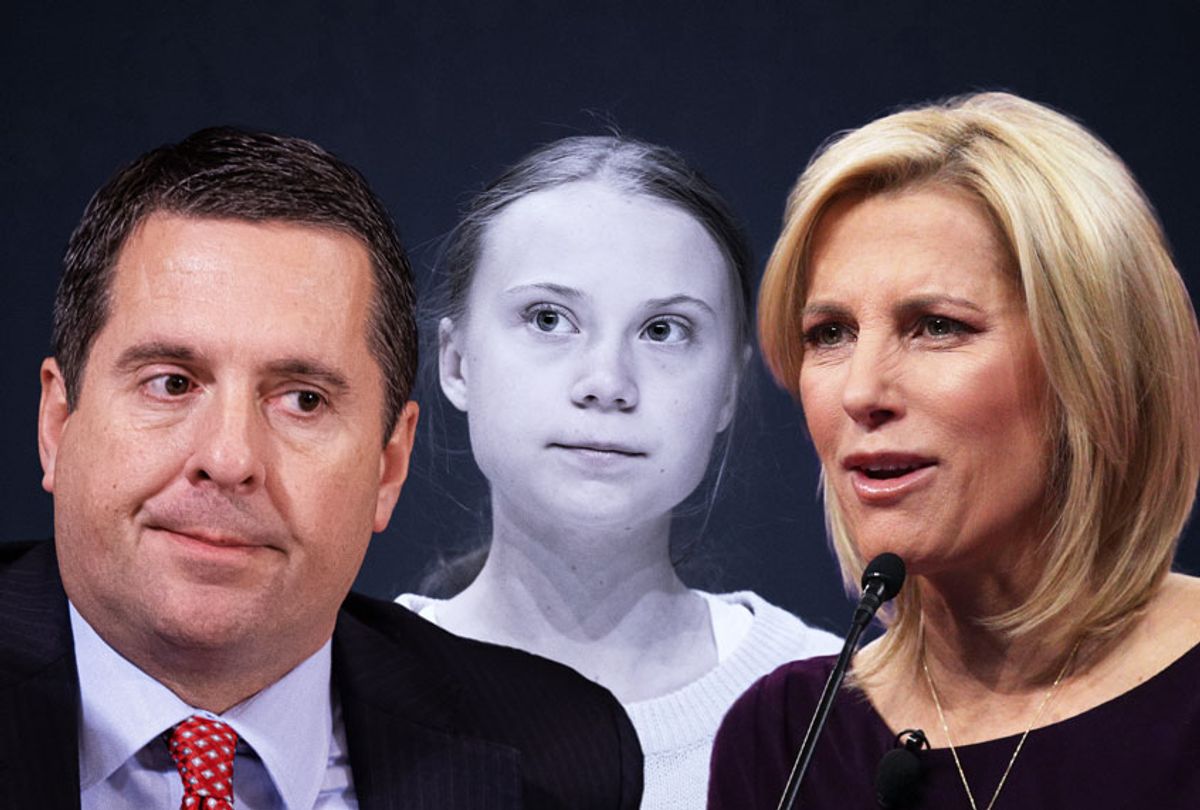 Ingraham began the segment mocking the teen with autism by lamenting that Time had chosen Thunberg “in spite of its own reader poll,” in which the Hong Kong democracy protesters had received the most votes. Ingraham later said that her second choice for “Person of the Year” would have been “the House Intel members,” including Devin Nunes, who she described as unfairly “maligned.”

After allowing Arroyo to explain his objections to Thunberg’s selection, Ingraham said that she agreed with the Time magazine poll results, because the Hong Kong protesters are “putting their lives in danger. They’re not being celebrated, really, on the late night TV shows, really. They’re putting their lives in danger. Some of them have been killed, wounded badly, targeted. They have to wear facial masks.”

Ingraham has courted controversy in the past for seemingly attacking Thunberg’s autism. After showing a clip of Thunberg’s speech at the U.N. climate summit in September, Ingraham asked her viewers, “Anyone else find that chilling?"

After comparing Thunberg to the antagonists from the 1984 horror movie "Children of the Corn,” Ingraham said, “I can't wait for Stephen King's sequel, 'Children of the Climate.' Now, the left — if they ever get in power — will simply use the excuse of climate change to reward their friends.”

Ingraham also discussed Thunberg's grades during the Wednesday night segment, and it was not the first time that Ingraham has mentioned a student protester’s performance. She lost advertisers like TripAdvisor, WayFair and Nutrish last year after she posted a tweet ridiculing Parkland school shooting survivor and gun control advocate David Hogg, writing that he was “Rejected By Four Colleges To Which He Applied and whines about it. (Dinged by UCLA with a 4.1 GPA...totally predictable given acceptance rates.)”

Arroyo characterized Time’s selection of Thunberg as the “biggest dud since Time designated the personal computer as ‘Person of the Year’ back in 1982.” Describing the 16-year-old Swede as “certainly indignant,” Arroyo claimed that “she dropped out of school to become a junior protester” and added “I think it’s kind of a horrible example, though, to kids — thinking just go protest, you don’t have to go to school. And I know she sails around the globe to help the environment, but this isn’t sailor of the year. It’s ‘Person of the Year.’”

Arroyo then said that his “Person of the Year” choices would have been the CGI artists that were responsible for “Avengers: Endgame,” “The Irishman” and Baby Yoda from “The Mandalorian,” as well as Speaker of the House Nancy Pelosi for allegedly “endangering her party.”

Although both Ingraham and Arroyo criticized Time magazine for supposedly shortchanging the Hong Kong protesters, the article explaining the choice of Thunberg specifically mentioned them. It connected her climate protest to “the student-led protests on the streets of Santiago, Chile, to the young democracy activists fighting for rights and representation in Hong Kong to the high schoolers from Parkland, Fla., whose march against gun violence Thunberg cites as an inspiration for her climate strikes.”

You can watch the segment below via Fox News: