Republicans admit it: Senate impeachment trial of Trump will be a total sham

Mitch McConnell plans to rush through a fake trial to a quick acquittal. So why did Democrats rush impeachment? 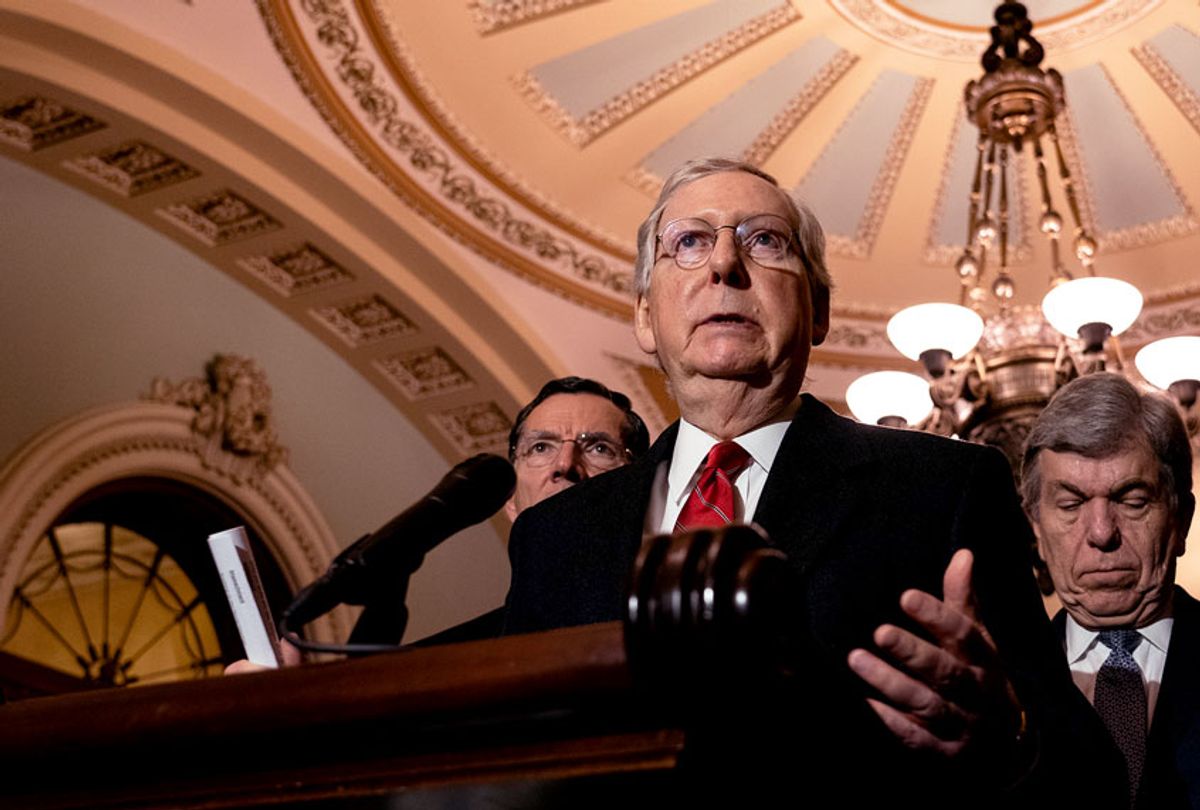 Senate Majority Leader Mitch McConnell (R-KY) speaks during his weekly press conference at the U.S. Capitol on November 19, 2019 in Washington, DC. Republicans spoke about their desire to work on their legislative agenda despite the impeachment hearings in the House. (Alex Edelman/Getty Images)
--

Senate Majority Leader Mitch McConnell knows Donald Trump is guilty. He just doesn't care — McConnell plans to cover it up and doesn't even really care how obvious that is

All that was made clear from an article published late Wednesday in the Washington Post, in which Senate Republicans admitted that the plan is to rubber-stamp their acquittal  of Trump, and their lack of desire to even try to dignify this travesty of justice by pretending to hold a real impeachment trial, as the Constitution demands.

Senate Republicans want to hold "a short impeachment trial early next year that would include no witnesses," the article explains, because they believe "it would be better to limit the trial and quickly vote to acquit Trump."

The reason they believe this is no mystery, of course. As the impeachment hearings in front of the House have showed, Trump looks guiltier with every minute of discussion on his scheme to blackmail Ukrainian leadership into falsely branding his presumed 2020 opponent, former Vice President Joe Biden, as a crook. Even when Republicans called witnesses during the impeachment hearings, those witnesses ended up giving testimony that made Trump look worse. When the GOP called a legal "expert" to critique the impeachment process his testimony was a confusing mishmash that only made the pro-impeachment witnesses look stronger.

Trump radiates guilt at every moment and with every public statement. So the only way for McConnell to conceal his guilt is to throw a blanket over the whole thing. Continuing to argue about it, even through the Republican methods of throwing tantrums and creating distractions, isn't really working — Trump's behavior pierces through all the noise like a laser stream of pure, red hot guilt. Looking away and refusing to discuss it as much as humanly possible is the best available option for Republicans.

Trump was reportedly interested in staging a big spectacle in the Senate trial, and calling Hunter Biden, House Intelligence Committee Chairman Adam Schiff, the original Ukraine whistleblower and who knows who else. For once, Republicans may defy him, but only to safeguard his presidency.

It was pretty much overdetermined that McConnell was going to go this way. He doesn't even bother to hide that he is a soulless robot programmed only to accumulate power and hang onto it. Even the pretenses he throws up to justify naked power-grabbing — such as his ludicrous claim that he couldn't bring Barack Obama's Supreme Court nominee up for a Senate vote in an election year — are thinly argued, with a side dose of snickering at the media suckers who report his obvious bad-faith claims with a straight face.

McConnell doesn't bother pretending to be fair for the same reason House Republicans shamelessly lied throughout the impeachment hearings, and for the same reason Attorney General Bill Barr is shamelessly lying about the FBI investigation into Trump's collusion with Russians during the 2016 election. Nearly to the last person, Republicans have convinced themselves that the Democratic Party — because it has a racially diverse base and is majority female — is inherently illegitimate.

That's what all this fake reverence for the founding fathers (while denying the legitimacy of the Constitution they wrote) is about: Institutional longing for a time when only well-off white men had a say in government, and everyone else was denied the right to vote. Well, they can't take away universal suffrage, but they can do whatever it  takes — cheat in elections, gerrymander legislative districts, suppress the vote, finance a fascist propaganda apparatus like Fox News and shield offenders like Trump — in order to devalue or eliminate all votes that aren't cast by white male conservatives and their wives.

All of this is why it was ultimately a bad move for Democrats in the House to move through this impeachment process so quickly. Instead, the House should have taken the advice offered by multiple writers and pundits (including myself): Impeach Trump for everything impeachable he has done.

I get the rationale behind going more rapidly. This entire process has been exhausting and demoralizing, because Republicans have a bottomless willingness to lie, usually while working themselves into shouting fits of fake umbrage. There was good reason to believe the public might get sick of the impeachment spectacle, and Republicans have done everything in their power to make sure that happened by behaving like the biggest assholes humanly possible while the cameras were on, so that only the most masochistic of us could sustain the ability to keep watching the hearings.

So I sympathize with the desire of Democrats to minimize their own exposure to spittle-inflected rage-fests from Rep. Doug Collins, R-Ga., or to lifeless recitations of Fox News conspiracy theories from Rep. Devin Nunes, R-Calif. But keeping the hearings going, and delaying a House vote on articles of impeachment, was the only way to keep this whole thing out of the Senate, where McConnell is prepared to shoot the impeachment process in the back of the head.

McConnell wants it over quickly because he knows that Republicans aren't doing themselves any favors by being the absolute worst at all times, even that strategy that works to scare off TV viewers.

So Democrats would have been better off soldiering through the misery and opening up the impeachment hearings to more of Trump's criminal behavior. Just this week, he had to pay a $2 million fine for stealing from his own charity. That story got buried in the news cycle, thanks to impeachment. If Democrats had made that part of an impeachment article, there's a not-small chance that even Fox News viewers would learn that Trump had pretended to raise money for veterans that actually went toward his own campaign.

Democrats could have also used the impeachment hearing to bring more attention to the numerous allegations that Trump has sexually assaulted and even raped women. Trump has been relentlessly disparaging his alleged victims from the Oval Office, which is as much an abuse of power and witness intimidation as when he did it to witnesses of his Ukrainian extortion scheme.

Instead, Democrats are handing the reins to McConnell, who will immediately, shamelessly and unapologetically drive the whole thing over a cliff. Trump should have been forced to sit through months and months of public testimony regarding what seems to be an endless stream of crimes, all while spinning more out of control and slurring his way through hate-filled rallies. Realistically, there was no other way to punish him or to keep his crimes at the center stage. By moving so quickly, Democrats surrendered most of their power.