Whether on a reality show or a "fun run," cameras have caught inappropriate touching, but women still aren't backed 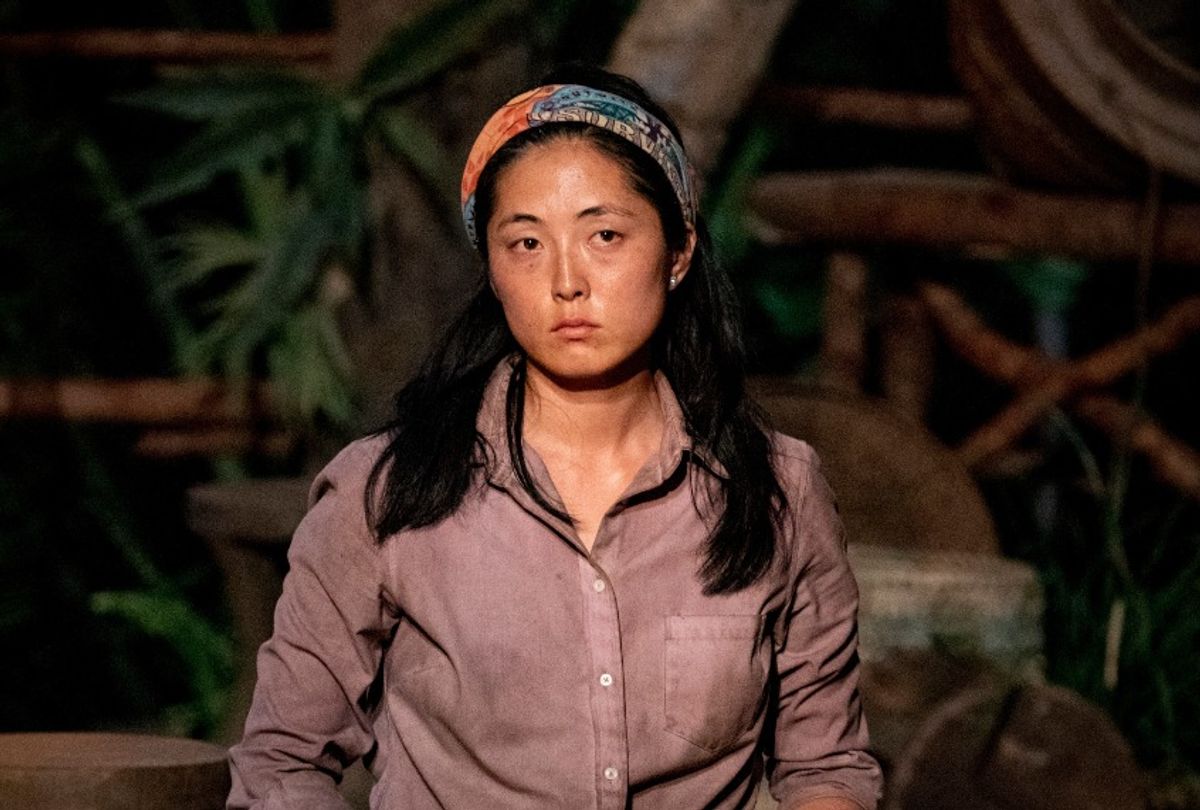 Much of the pain and frustration we’re going through in 2019 comes down to some version of the same and very simple couple of questions: How much do we need to see to believe, and what is required to take action?

These questions brought us to December 18, 2019, a historic day for the United States that coincides with another noteworthy development in prime-time TV history.  Wednesday’s broadcast of the 39th season finale of “Survivor” will be first in the show’s 19-and-a-half year history to be pre-recorded several hours before it airs on CBS. But it’s the why of that approach that is important.

The network opted out of the standard live reunion format to give contestants the opportunity to safely express their views about a season largely defined by a sexual harassment scandal turned into a storyline for the show, and that played out before and audience of millions. The entire debacle has been a PR nightmare for CBS and the production itself, one that both entities handled miserably.

In November, the veteran reality competition show aired an episode in which contestant Kellee Kim speaks out about being subjected to unwanted touching by fellow castaway Dan Spilo, a Hollywood talent manager. Kim, who had been complaining about Spilo touching her since the beginning of the season, is visibly shaken and brought to the verge of tears in a confessional. She becomes so emotional that a producer, speaking from off camera, lets her know that if she says the word, they'll step in.

Later in the same episode, Kim is voted out of the tribe while Spilo, seen in archival footage being handsy with Kim and other women, remained in play. Or he did until the season’s Dec.  11 episode, which ended with host Jeff Probst informing the remaining contestants that Spilo had been removed from the game and would not be returning to their camp.

A title card further explained that Spilo’s removal was the result of an off-camera incident and did not involve a player, but beyond that no specifics were offered at the time of the broadcast.

Later those details were revealed to People: Spilo — who, over the course of the season, viewers saw touching multiple female contestants' hair, midriffs and even their feet — was finally ejected after he put his hand on a female producer’s thigh.

From the cold eye of the producers, this on-camera harassment of a woman by a man — real people, not characters — serves to remind viewers how accurately the game plays out as a microcosm of society. Kim wasn’t the only one Spilo touched without consent. But she is the only one who spoke up about it, and was punished for it.

But critics and other humans who aren’t fans of watching real human beings suffer for the sake of creating a learning experience were not on board with the network’s handling of the situation — especially since we actually watched it happen.

It’s strange how circumstances like this illustrate how much gender parity work remains to be done, in the industry and in our culture. CBS isn’t the only network that has been hit with accusations of harassment, on top of gender and racial discrimination in the workplace. But it is the one on whose top executive, Les Moonves, was finally ousted for decades’ worth of predatory misconduct following rumors that have dogged him for just as long.

Moonves’ 2018 ouster was a significant industry development, but it did not mark the end of sexual misconduct and bias accusations at CBS. The toxic culture he nurtured over decades remains in place, and to this day, stories are still emerging about its executives protecting directors, producers and stars from facing any consequences for harassment claims brought against them.

And when I say to this day, I mean Wednesday, Dec.  18, the day the Hollywood Reporter released a story revealing the toxic, hostile work environment on Showtime’s “The Affair," one allegedly created by its showrunner Sarah Treem that led to its star Ruth Wilson exiting the series.

However, the “Survivor” story has also played out parallel to a story covered by “CBS This Morning,” that of Alex Bozarjian, a reporter for Savannah station WSAV-TV who was covering a local “fun run” on Saturday, Dec. 7, when a marathon participant, 43-year-old Thomas Callaway, visibly smacks her on the backside as she runs by.

The video of Bozarjian’s reaction quickly went viral, racking up more than 10 million views by the time she sat down with “CBS This Morning” hosts Gayle King, Anthony Mason and Tony Dokoupil on Tuesday, Dec. 10.

Bozarjian calmly and eloquently refused to speak to the man’s claims that he didn’t really mean to do hurt her, “because he hurt me.” But what she subsequently tells the anchors is really illuminating. She admits she’s been inundated with “female guilt . . . I guess because of the social media attention.”

Asked to elaborate, Bozarjian says that in the midst of the support she’s gotten, she’s also gotten a number of comments that she should just “accept Callaway’s apology,” or worse, that it was her fault because she “put [her]self in the line of fire.”

As Bozarjian, King, Mason and Dokoupil point out, she was simply doing her job, and “he helped himself to a part of my body,” she said. What it comes down to, she added, is “he took my power,” she said, and I’m trying to take it back.”

Callaway went on to “Inside Edition” to offer this half-hearted non-apology on  the same day: "I was caught up in the moment,” he said. “I was getting ready to bring my hands up and wave to the camera to the audience, there was a misjudge in character and decision-making. I touched her back; I did not know exactly where I touched her."

The next morning “CBS This Morning” played an excerpt, prompting the following exchange.

“I’m not sure I heard an apology in that statement,” offered Mason, repeating, ‘’If I had seen her facial reaction, I would have apologized.’”

“Well now that you have seen her facial reaction, along with 11 million other people,” Dokoupil piped in.

“And he’s got two daughters, he also thought about that,” King added, stone-faced, prompting Dokoupil to quip, “Yeah, he’s on to something.”

You may recall that “CBS This Morning” used to be the morning show home to Charlie Rose, who co-anchored with King prior to his November 2017 exit due to multiple charges of sexual misconduct.

As far as I can tell, CBS’ morning news program is the only one to interview Bozarjian on the air following the incident. And while spotlighting her story serves the company’s ends, it also appears to have moved other outlets to follow her story too: Last week Bozarjian pressed sexual battery charges against Callaway, and Savannah Police Department officer arrested Callaway on Friday, Dec. 13.

Again: there is video evidence of this assault that’s been viewed by millions and will likely be seen by millions more. Callaway is out on bail and is already letting the world know that he is a youth minister. How well that plays against the fact that he swatted a stranger’s body on camera, while she was doing her job, remains to be seen.

At least Bozarjian was able to avail herself of the protection she is afforded by law as a citizen. “Survivor” contestants, on the other hand, had no such clear recourse until this week. CBS issued a statement to the media vowing to implement new production rules meant to better protect contestants. According to the network’s statement, this includes:

“Season 39 of ‘Survivor’ has been unprecedented for all of us,” says CBS’s official statement, “with important social issues and inappropriate individual behavior intersecting with game play in complex ways that we’ve never seen before. [Salon notes: That’s not quite true, as anybody who has watched previous seasons of the show or witnessed the racism displayed on “Big Brother” knows all too well. ] During the course of the production, we listened to the players intently, investigated responsibly and responded accordingly, including taking the unprecedented step of removing a player from the game.”

This is true: they did remove Spilo . . . right before the finale. Kim had been voicing her displeasure at being touched since the beginning of the season.

As of this story’s writing, according to People, Spilo was uninvited from the finale taping and two other contestants are declining to appear. But this week Spilo found time to issue an apology, directed solely at Kim, by way of a statement to the outlet.

“I am deeply sorry for how my actions affected Kellee during the taping of this season of 'Survivor,'” he told People on Tuesday. “After apologizing at the tribal council when I first learned that Kellee still felt uncomfortable, I want to make sure I do so again, clearly and unambiguously.”

On social media, Kim revealed her skepticism as to how genuine Spilo’s contrition truly is.

It‘s curious that Dan has decided to publicly apologize to me — and just me — on the eve of the #Survivor39 finale for a series of inappropriate incidents that occurred months ago and impacted a number of women on set.

This notch on the #MeToo historical timeline is worth noting, whether you’re an ardent fan of “Survivor” or not. More to the point, if you believe that our government’s resistance to gender equality and women’s rights is related to our slide away from liberal democracy, you should probably pay just the slightest attention to what’s happened here.

CBS, quite visibly, is announcing its intent to do the right thing by future “Survivor” contestants, although it’s mostly those competing in Season 41 who will be subject to the full extent of these changes since Season 40, kicking off in early 2020, has already been taped.

However, these circumstances still illustrate how easy it is for a multi-billion dollar media conglomerate can delay or deflect doing the right thing despite the fact that millions of people are watching what’s going on.

Any media analyst would counter with, of course. Seeing hard evidence of misbehavior play out right in front of us and shrugging it off, refusing to believe it or straight-up denying what we’re seeing is, indeed, the top story of America right now. Disbelieving fact or treating the opposite side’s self-serving viewpoint, even when it is pure fantasy, is the prism through which we’ve been trained to view reality.

So if a woman on “Survivor” is subjected to unwanted touching, speaks up about it and is kicked off while the accused is allowed to nearly make it to the finale and the $1 million prize, that’s just how the game goes; that’s what she signed up for. She is under a contract, which means she, like her fellow contestants, are actually working for the producers and a network.

But she signed up for it, right?

At the very least, and very, very late in the life of “Survivor,” now there are long-overdue protections in place. They won’t help the Season 39 contestants, but it may be interesting to see what, if anything, they’ll have to say about that – and whether what’s said ends up making the more lasting memory than who ends up winning that million-dollar prize.