From unicorn desserts to pumpkin spice, here are the most memorable food trends of the 2010s 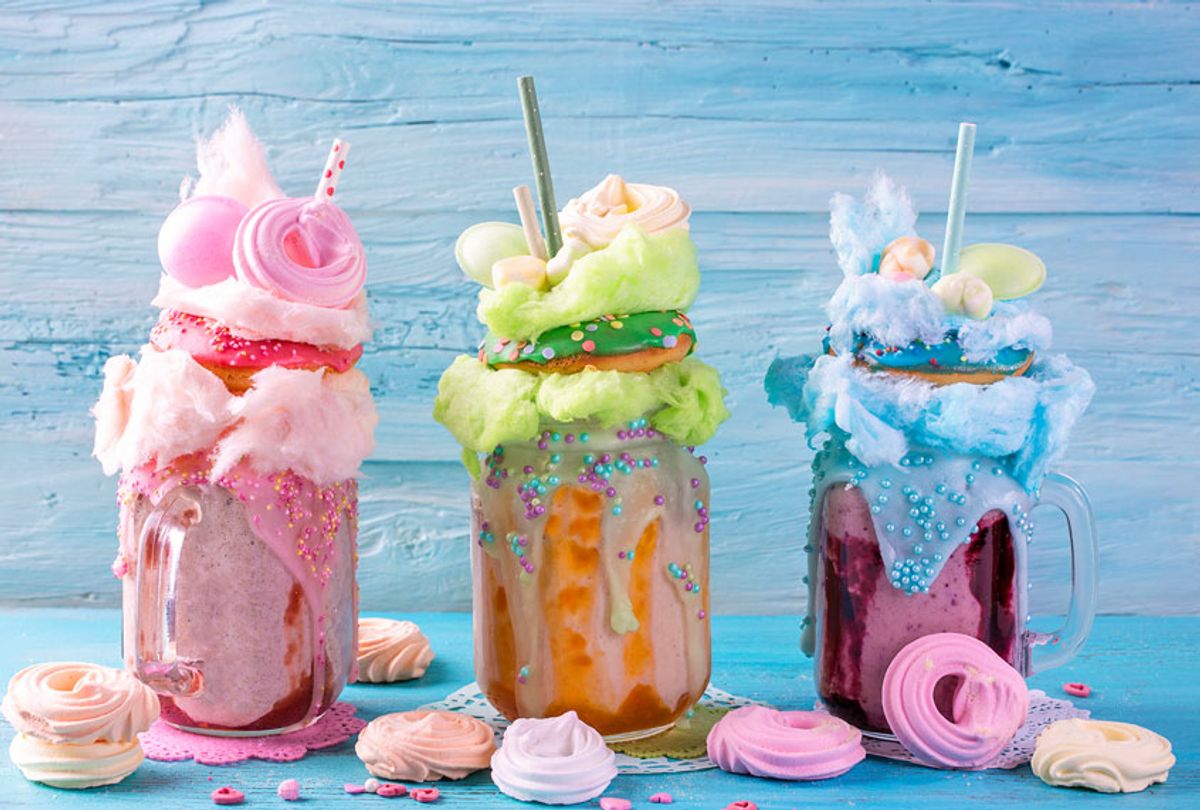 Initially, I was going to write this story as a sort of “best and worst food trends of the decade” list; I certainly have my favorites developments (the bourbon boom) and trends that I would have liked to see buried about nine years ago (viral chicken sandwiches).

But then as I began contemplating what has come out of the culinary world over the past 10 years, both the highs and the lows, I was reminded just how fluid food trends actually are. Put another way, you can’t talk truly about the sushirrito without talking about the Cronut, both unique creations of the 2010s that spoke to a certain appreciation for hybridization, and a willingness to brave multi-block lines to attain one.

So, here are some of the decade’s biggest food trends — and all the good and bad within.

Eating better is apretty virtuous pursuit, but over the last 10 years, the question of how one does that — and what foods fit into that “better” category — has gotten a little more complex. Is the solution tangy kombucha? Cauliflower pizza crusts? Kale chips? Bone broth? Cold-pressed juices? $14 acai bowls?

Integral to this trend are some genuinely heartening developments, like increased corporate and personal interest in meat alternatives and an appreciation for locally farmed produce. But then, of course, there are the products and fads that seem to have emerged fully formed from The Bad Place, like tea-toxes, activated charcoal (which, while the pitch-black charcoal ice cream cones it creates please my little goth heart, was banned by the NYC Health Department as a food additive) and the numerous Reddit pages dedicated to combating “Keto rash and flu.”

I live in the South, but please, for the love of God and Dolly Parton, please stop serving me cocktails in a Mason jar. That trend seems to have spread just as “New Southern” cuisine was finding its legs nationally, which aside from an occasional eye roll in the direction of chefs serving “artisan grits,” was by and large a culinary development I very much appreciated.

I think it’s great that this was the decade that chefs who aren’t living on the coasts — like Sean Brock, Niven Patel, Ashley Christensen, and Edward Lee — helped sparked conversations about what kinds of foods we consider “gourmet” or worthy of acclaim and national attention.

The unfortunately short-lived Netflix series “Tuca and Bertie” was really clever in its depiction of the culinary world in several ways, including a plotline surrounding that featured the viral “crunt” — a cruller and bundt cake combo made by celebrity chef and hot animated penguin Pastry Pete. This was an obvious reference to the cronut, a croissant-doughnut pastry invented by New York City pastry chef Dominique Ansel of Dominique Ansel Bakery.

When it was first introduced in 2013, the fan response was almost immediate. Within three days, there was a line of over a hundred people waiting outside the bakery for an opportunity to try the new pastry; within nine, Ansel filed to trademark the name (there are now knock-offs that go by names like dough-sant).

Two years earlier, in 2011, Sushirrito opened in San Francisco; it prompted a similar response from hungry crowds. There were lines that rounded the block and food writers started to publish articles with headlines like, “Worth the wait? Palo Alto's Sushirrito draws crowds with sushi-burrito hybrids” and “San Franciscans are lining up to eat this sushi-burrito hybrid.”

The reviews were mixed, but as is the case with the cronut, it seemed for many people the reward for waiting in line wasn’t the food at the end of it, but the inevitable Instagram post that follows.

The first episode of the unscripted Comedy Central series “Nathan for You” follows host Nathan Fielder as he visits a failing frozen yogurt store. Customer interest just isn’t what it used to be, the owner explains. Fielder comes up with a shock tactic intended to incite some of that early 2000s enthusiasm for the frozen treat: poo-flavored yogurt. What follows is a bizarre ride through flavor development and roll-out — and the customer response is hilariously predictable.

But the entire time I was watching, all I could think was “just put a rainbow on it.”

Rainbow-colored and unicorn-themed breads and desserts really defined the decade — from the Starbucks “secret menu” of Pink Drinks and Rainbow Refreshers to “freakshakes” with marshmallow fluff manes and hard candy horns.

Food For the ‘Gram

Both the rainbow foods and the viral hybrid foods tie into this trend — eating for Instagram. Everyone with a smartphone and a plate in front of them became a de facto food photographer and stylist, and some restaurants are playing into this new reality with floor plans specifically designed to be Instagrammable.

In 2016, Beyonce released “Formation,” and one line rang through the world of food: “I got hot sauce in my bag. Swag.” In her essay for Eater, writer Mikki Kendall said the lyric was the singer’s way of talking to the Southern and Great Migration Black Americans listening.

“It's a reference to a cultural connection, one that spans the diaspora of Black American identity,” Kendall wrote. “You might prefer Crystal to Louisiana, you might only use it on greens that your Grandma didn't cook, you might rely on someone else having it, but you definitely used hot sauce. You definitely grew up seeing it used by the people that raised you, the people who gave you a sense of your roots, no matter where you were in America.”

This was a decade that definitely saw hot sauce — and the messages it conveys about our backgrounds and culinary proclivities — step into the spotlight. According to a Quartz chart compiled by Euromonitor, between 2000 and 2013, the US hot sauce market grew 150 percent more than "that of BBQ sauce, ketchup, mayonnaise, and mustard combined.”

With that came the rise and fall of Sriracha — helpfully outlined in this documentary by filmmaker Griffin Hammond.

On one side of the 2010s flavor spectrum there was the acid-spice punch of hot sauce, on the other there was pumpkin spice, a blend of cinnamon and ground ginger that reached peak virality in the wake of the 2000s Starbucks Pumpkin Spice Latte insanity. Now pumpkin spice in everything: chicken sausage, hummus, hand sanitizer, beer, and water. Like most eye roll-worthy trends, this is a definite case of too much of (what had been, and what still is in the appropriate context) a good thing.

Just like in the world of restaurants, there are food truck concepts that seem a little too precious or played-out, but as a whole, I am a huge fan of food trucks. They enable chefs who don’t have the funds or inclination to open a brick and mortar location the ability to take their menus to the masses. While there has always been street food in America, food trucks in their current state really picked up after the recession; some chefs, like LA’s Roy Choi and Wes Ávila, garnered national acclaim for their trucks and helped drive a new food economy filled with revamped food stalls, halls, and courts.

While food trucks were taking to the streets, the popularity of fast casual restaurants like Shake Shack and Chipotle surged.

“Fast casual continues to be a bright spot in the U.S. restaurant industry because they are providing consumers exactly what they want,” says David Portalatin, NPD Food Industry Advisor. “They offer quick and good service, high quality food, and a pleasant experience.  It’s really the not-so-secret-sauce of success.”

According to a 2018 study by NPD (formerly National Purchase Diary Panel), visits to fast casual restaurants have grown 6 percent annually over the last five years, making it the only restaurant segment to have year-by-year traffic increase during that time period.

There have been a ton of fascinating trends in the spirits department over the last decade — a resurgence in the consumption of bourbon, like I’d mentioned, and a newfound general interest in natural wine.

When taken individually, a lot of them seem disparate, like the respective spikes in popularity of rosé, aperol, and White Claw. Taken together, however, I think the 2010s was an experiment in sessionable drinks, the kinds that have relatively low alcohol content and are suitable for nursing over an afternoon or evening.

Part of this certainly seems to be a natural extension of the non-alcoholic beverages people were drinking; it was a big decade for flavored seltzer, too. But it also seems to be a way for people to wade into the sober-curious and mocktail trend that is picking up for the 2020s.