"For a Few Paintballs More" has what the latest "Star Wars" sequel lacks: Spirit, fun, and truly suspenseful action 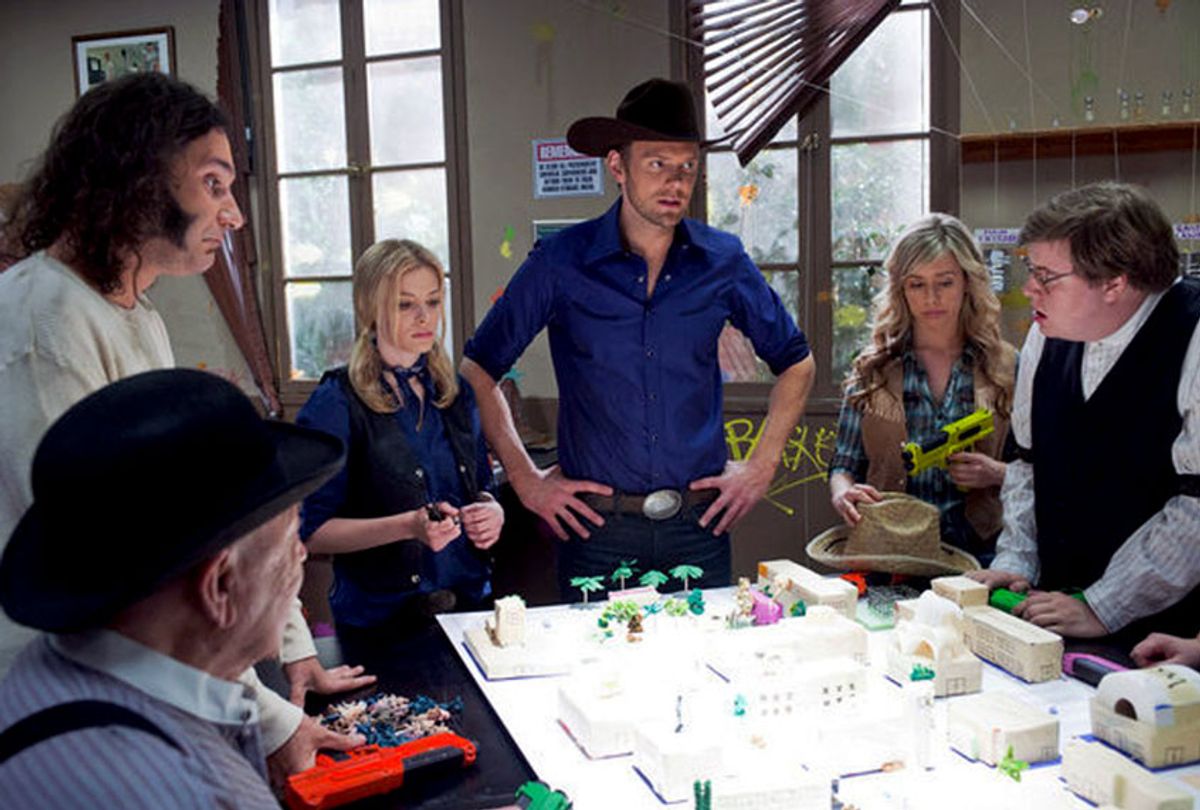 Spoilers ahead for both "The Rise of Skywalker" and the "For a Few Paintballs More" episode of "Community."

Looking over the list of movies and TV shows binge-watched at my house over the Christmas break, a pattern seems to emerge: A subconscious desire to wash out the bad taste left in the mouth from being one of millions of Americans who saw "The Rise of Skywalker" over the weekend, by watching movies like "Captain America: Winter Soldier" or classic TV shows like "Star Trek: The Next Generation." You know,  stories that serve up all sorts of sci-fi gibberish and action sequences like "Skywalker," but without all the sucking.

But of all the streaming pleasures of the unstructured holiday time, what ended up standing out as the starkest contrast with "Skywalker" wasn't a sci-fi or fantasy show at all. Instead, it was an episode of that strange but delightful Obama-era sitcom, "Community" — specifically, "For a Few Paintballs More," the second part of the finale for the second season of this silly little show about a community college in Colorado.

In the space of 20 minutes, give or take, this episode about a paintball fight at the fictional Greendale Community College manages to pull off what J.J. Abrams, with his $275 million budget, could not do: Make a "Star Wars" sequel that tells an exciting and original story while staying true to the zany underdog spirit that made the original trilogy so compelling.

"Community" was notorious for its meta nature, with most of its best episodes doubling as homages to classic films and TV shows, both arty and popcorny. The first part of the second season finale, "A Fistful of Paintballs", sends up Western films while depicting the students destroying the campus to win the $100,000 prize offered to the winner of a game of "paintball assassin." In "For a Few Paintballs More," the characters realize their school is being invaded by City College, a rival community college, and so the story shifts into a "Star Wars" homage.

Why does it work so much better than the limp offering by Abrams currently raking in cash at the movieplex? Because director Joe Russo and writers Dan Harmon and Hilary Winston actually know how to tell a real story. But let's break it down piece by piece.

Meaningful stakes. In "Paintballs," people are fighting over a community college, whereas "Skywalker" is about the fate of a galaxy. And yet, the stakes in "Paintballs" feel significantly higher. That's because the school in "Community" symbolizes the kind of acceptance, friendship, and care that people long for but often don't get in real life, and so the threat to it resonates with meaning beyond the parameters of the show's plot. The galaxy in "Skywalker" doesn't have much meaning besides "remember that movie you liked as a kid"?

Stakes aren't about how many imaginary people whose fictional lives you threaten. It's about telling stories that are attached to your audience's real emotions and desires.

The spirit is what makes a story work, not the specific beats. As with "The Force Awakens" copying "A New Hope," the strategy Abrams uses in the climax of "Skywalker" is to follow "Return of the Jedi" beat for beat: The confrontation between Luke/Rey in Palpatine's throne room while the Rebels/Resistance are losing, the Darth/Kylo character choosing love for Luke/Rey over Palpatine at the last minute, the Luke/Rey character holding Darth/Kylo in their arms for a private moment of forgiveness before they die. Making the central relationship one between would-be lovers instead of a parent/child isn't really some earth-shattering addition to the formula.

In contrast, the plot of "Paintballs" doesn't really track in any detailed way to any of the "Star Wars" movies. Instead, the main action is the Greendale students, in the role of the Rebels, luring the bad guys into a trap, rather than taking the fight to them. Plus, the characters who adopt the Han and Leia roles get themselves "killed" in a noble sacrifice, which definitely doesn't happen in "Star Wars."

And yet, "Paintballs" works better as a "Star Wars" movie because it understands that the specific plot beats matter less than the spirit in which they play out. The Greendale students are scrappy underdogs who save  themselves with their wits and spunk and a real sense of fellowship — this spirit, drawn directly from the original trilogy, feels notably absent in "Skywalker."

Action that's actually exciting. It doesn't hurt that, despite working with a sitcom budget, Russo is able to direct action sequences in "Paintballs" that both make sense logistically and are actually suspenseful, none of which can be said for the action in "Skywalker." The two set pieces — the storming of the City College stronghold and the library trap — are exciting not because of threat of death (no one even gets hurt), but because they're convincingly set up in the script to be difficult-to-impossible missions to pull off.

Meanwhile, as far as I could tell from "Skywalker," the Empire/First Order has learned nothing from the first one billion movies about building weapons with defenses that can withstand even a little more force than a few pew-pews from a laser cannon.

Humor. "Community" has the advantage, of course, in that it's a comedy, but for the love of Hollywood, there is no excuse for the vapidity of the humor in "Skywalker." One of the things that makes the original trilogy feel fun and carefree is there's a cheeky sensibility to a lot of the humor, which helps smooth over some of the plot holes and inconsistent characterization issues.

Danny Pudi's turn as Abed playing at being Han Solo in "Paintballs" in particular captures the constant quips and shameless flirting that makes the character fun in the first place. Literally no one steps into that role in "Skywalker," even as Abrams felt compelled to recycle plot points from previous movies. And no, C-3PO making five too many jokes about having lost his memory is not an adequate replacement.

Real characters. I've seen now six to seven hours of movies with John Boyega playing Finn, a supposedly main character, and through no fault of Boyega's, I couldn't tell you what Finn's personality is like. In contrast, some characters in this episode of "Community" only have a few lines, and yet they feel more fleshed out, and therefore their little 60-second story arcs resonate.

Magnitude, a character who mostly exists to mock taglines used by lesser sitcoms, is knocked out of the episode in the first few minutes when he throws himself on a paint grenade to spare his fellow students. And yet, you learn more about him as a person (that he likes to act cool, but deep down he cares) than you do about Finn in the entire new trilogy run. And Quendra-with-a-"Qu"'s minute-long arc where she faces her fears and throws herself into the fray only to be cut down immediately with paintballs is more fully realized than what they try to pass off as character development for Poe.

It's hard to care about stories when the characters don't seem like real people, J.J. The only good part of "Skywalker" is the Rey/Kylo relationship, and that is mostly a hangover from Rian Johnson's crack at the trilogy, "The Last Jedi" — which, for all the criticism it gets, at least tried to be a real movie with a real story.

For what seems like years now, but has probably only been months, the internet has been consumed by this controversy over Martin Scorsese saying superhero  movies aren't real cinema and the sprawling debate that resulted. But whether or not a work is considered high art isn't the sole measure of its quality. (Scorsese agrees, by the way.) The problem with "Skywalker" isn't that it's a popcorn film. It's that it's lazy. Just because your movie isn't high art doesn't mean it isn't worth doing right.

So instead of wasting your money by seeing "The Rise of Skywalker" again, fire up that Hulu subscription and rewatch "For a Few Paintballs More." It's a reminder that mindless entertainment can still be well-made, and, more importantly, that just because a story is an homage, a remake or a sequel doesn't mean it has to be unoriginal.