The guy who spread "anti-Semitic conspiracy theories over cocktails can take a seat," de Blasio says in response 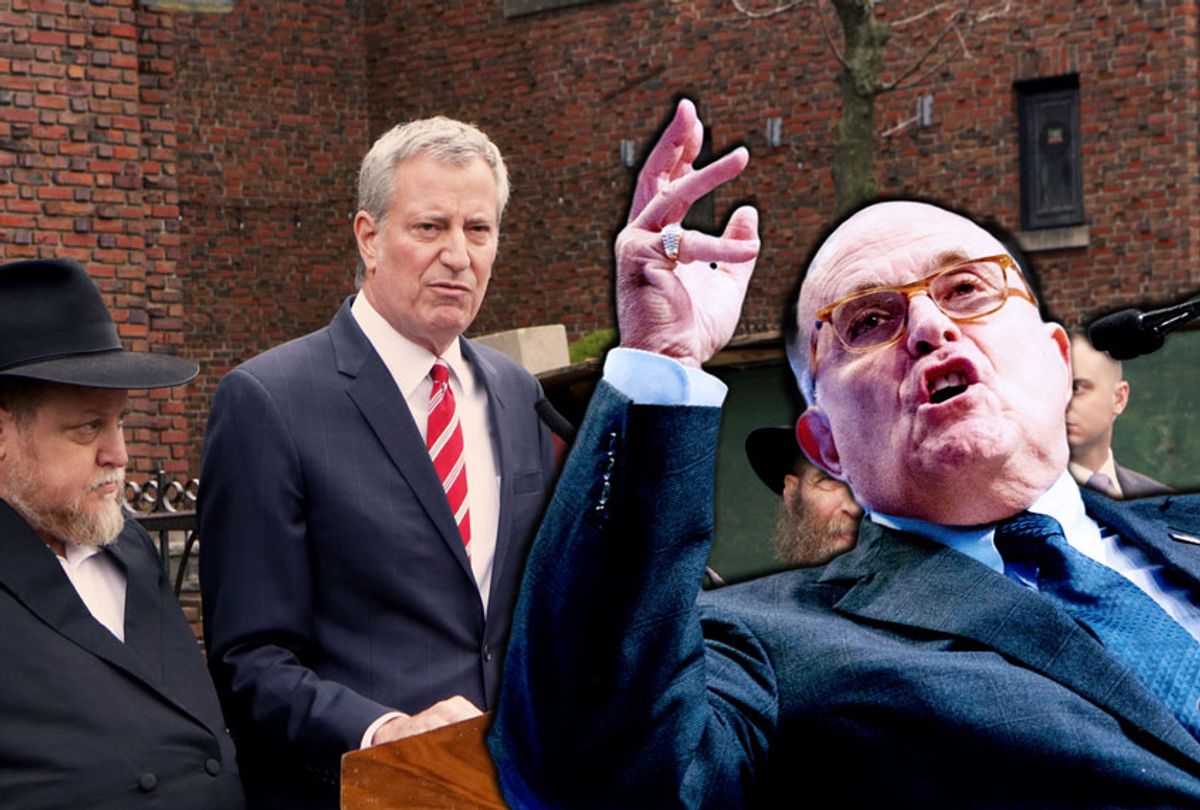 Rudy Giuliani, the former New York City mayor who currently serves as a lawyer to President Donald Trump, lashed out at one of his successors Bill de Blasio and Rep. Eric Swalwell, D-Calif., after the two Democrats criticized his recent anti-Semitic remarks amid a rise in violence in the Empire State.

“The rise in anti-Semitic violence in NYC is something that could have been stopped at a much earlier stage if the City had a Mayor who embraced the Broken Windows Theory, or at the least, a Mayor who worked full time & paid attention to what was going on,” Giuliani tweeted Sunday about de Blasio.

The "broken windows theory" was developed by criminologists who argue that visible signs of smaller crimes such as the vandalism of broken windows, as well as civil unrest and anti-social behavior, create an environment which cultivates more serious crimes. This theory has been used to justify increasing police power and implementing policies like "stop and frisk."

Speaking to Fox News on Sunday, de Blasio said that “an atmosphere of hate has been developing in this country over the last few years. A lot of it is emanating from Washington, and it’s having an effect on all of us.”

After seeing Giuliani’s tweet, de Blasio added that his predecessor was “exploiting a tragedy to sow division between New Yorkers and promote himself,” and “the guy who spent this week spreading anti-Semitic conspiracy theories over cocktails can take a seat today.”

Giuliani responded to de Blasio that night by describing him on Twitter as “possibly the worst Mayor in NYC.” He also claimed that his successor “has watched anti-semitism rapidly metastasize, like a cancer, & is too unconcerned or lazy to “nip it in the bud.”

After reiterating his support for the “broken windows theory" in fighting crime, Giuliani concluded that de Blasio was a “coward,” because he has yet “to condemn anti-semities in his own party who support BDS & similar movements, who’s main objective is to destroy the Jewish Homeland.”

Trump’s lawyer also had harsh words for Swalwell, tweeting that “not only have I condemned anti-semitism early & often, I threw Arafat out of UN concert, prosecuted 2 Nazi War criminals, & went to Israel to help after bombings. Meanwhile, Swalwell, doesn’t have the guts to condemn the anti-semites in his own party - a fraud & COWARD!”

Giuliani’s comments came after Swalwell promoted an editorial in the Jewish Forward blaming the Trump administration for enabling anti-Semitism. In his tweet, Swalwell referenced Giuliani’s claim last week that he was “more Jewish than [George] Soros.”

In an interview published by New York Magazine last week, Giuliani was quoted as saying that he could oppose Soros, a liberal philanthropist and billionaire, without being accused of anti-Semitism, because “Soros is hardly a Jew. I’m more of a Jew than Soros is. I probably know more about — he doesn’t go to church, he doesn’t go to religion — synagogue. He doesn’t belong to a synagogue. He doesn’t support Israel. He’s an enemy of Israel.”

Swalwell has not been alone among prominent Democrats who have claimed that Trump bears some responsibility for the rise of anti-Semitism in the U.S.

“President Trump is not solely to blame for the rise of anti-Semitic violence – and we do not yet know the political beliefs or motivations of the perpetrators of recent attacks – but the president is not absolved of responsibility for emboldening hateful ideologies and extremists in our country," Jewish Democratic Council of America Executive Director Halie Soifer said in a statement shared with Salon on Sunday. "Hatred does not emerge in a vacuum, and President Trump’s rhetoric and policies have unquestionably played a role in legitimizing and normalizing the rise of hatred that has afflicted our community in recent years. Symbolic gestures on Israel have done nothing to make American Jews more secure."