Fox News judge: John Bolton testifying could be "good news for the Democrats"

"If he does testify, he opens up the floodgates to a real trial," Andrew Napolitano tells Fox host Martha MacCallum 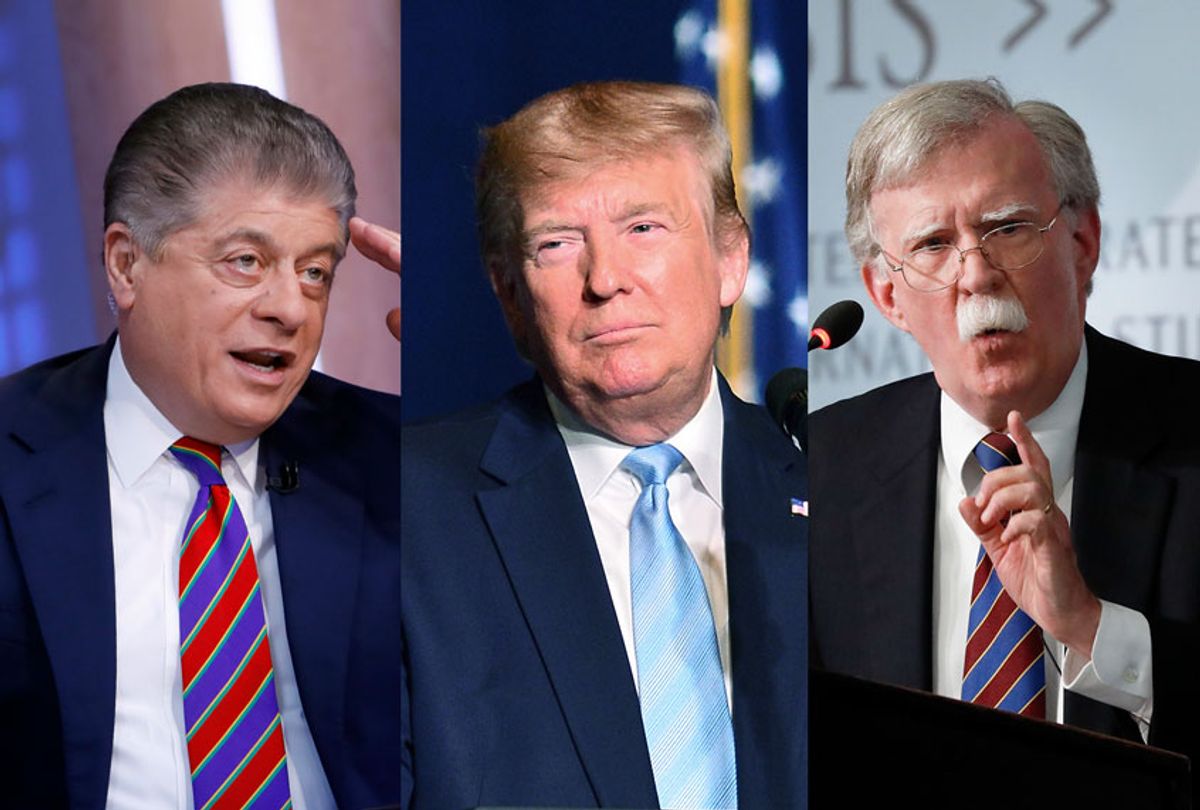 Former National Security Adviser John Bolton’s willingness to testify before the Senate under a subpoena could be “good news for the Democrats and bad news for the president,” according to Fox News’ own Judge Andrew Napolitano.

"If he does testify, he opens up the floodgates to a real trial, meaning, as Senator [Chuck] Schumer [D-N.Y.] has been saying as recently as a few hours ago, live testimony and documents — not summaries of what people told the House Judiciary or House Intelligence Committee, as they did in the Clinton investigation,” Napolitano told his Fox News colleague Martha MacCallum on Monday. “That's what's good news for the Democrats and bad news for the president.”

But Napolitano was not entirely rosy about the outcome of Bolton’s testimony for those who hope President Donald Trump will be removed from office.

“We don't know what John Bolton will say, and he might not give an interview,” Napolitano continued, adding that “it would be crazy for a prosecutor to call a witness to testify without knowing ahead of time what the witness is going to say in the real world. And impeachment, [while] it's not quite the real world, that would be malpractice whatever the outcome.”

If Bolton winds up testifying that he heard Trump say that Ukraine would not receive foreign aid unless they investigated former Vice President Joe Biden, Napolitano said: “That would be very hard for the president, and it might force the president to take the stand in his own defense."

Bolton, who has thus far resisted testifying, released a statement Monday saying that he would honor a Senate subpoena to do so.

He concluded, “Accordingly, since my testimony is once again at issue, I have had to resolve the serious competing issues as best I could, based on careful consideration and study. I have concluded that, if the Senate issues a subpoena for my testimony, I am prepared to testify.”

Napolitano has been willing to criticize Trump in the past. He argued in October that Trump’s controversial July 25 phone call to Ukrainian President Volodymyr Zelensky “manifested criminal and impeachable behavior,” writing on Fox News’ website that “the president need not have committed a crime in order to be impeached, but he needs to have engaged in behavior that threatens the constitutional stability of the United States or the rule of law as we have come to know it.”

He also criticized the president in a 2018 interview with Salon by challenging the constitutionality of Trump’s appointing Matthew Whitaker as acting attorney general.

“Any judicial mind examining the circumstances of Mr. Whitaker’s appointment would find that it is not lawful because it does not comply with the specific statute, which requires that whoever runs the DOJ — I’m not talking about any other department, but the DOJ — must have been nominated by the president, confirmed by the Senate at the time they are elevated,” Napolitano told Salon at the time.

Trump is accused of withholding $391 million in military aid to Ukraine to pressure the country into opening investigations into the 2016 presidential election and a debunked conspiracy theory about Hunter Biden, the former vice president’s son. He has been impeached on charges of abuse of power and obstructing on the congressional investigation into the Ukraine scandal.