Maybe you thought impeachment hearings had made Adam Schiff a national figure. Not on "Jeopardy!" it seems 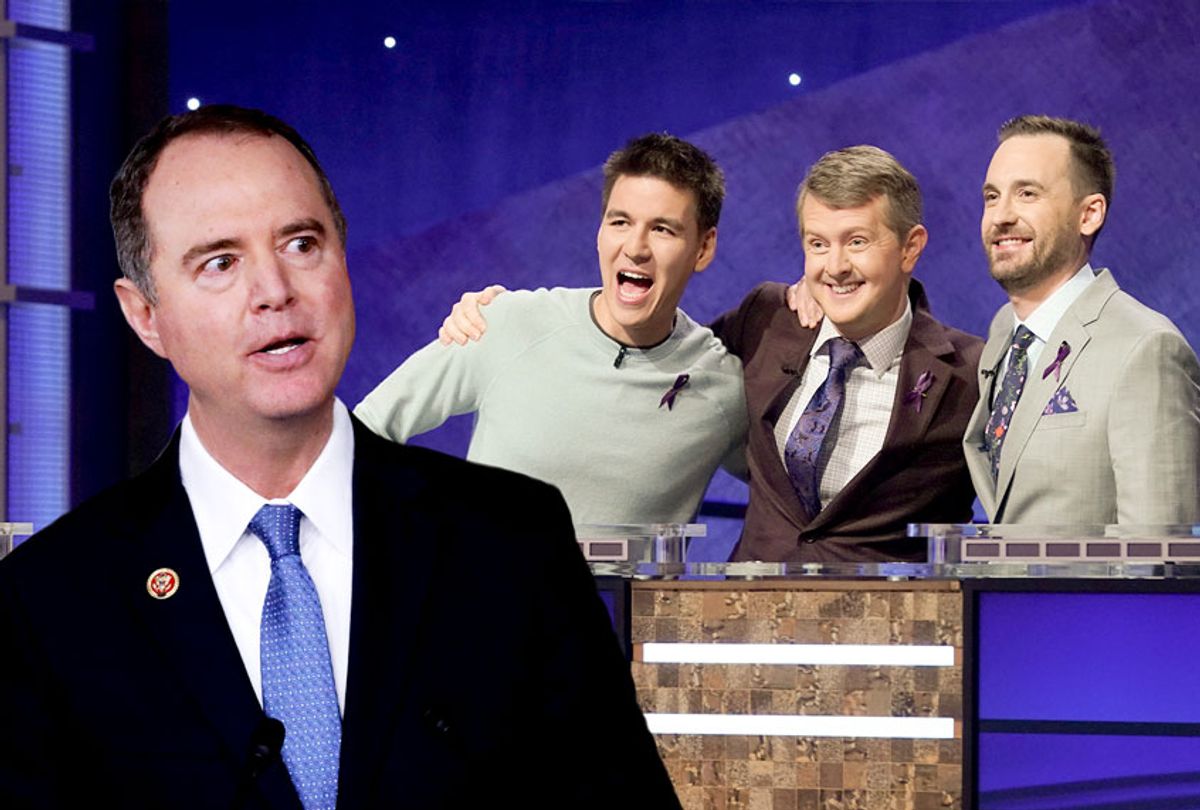 Three contestants on "Jeopardy!" failed to identify a photograph of Rep. Adam Schiff, D-Calif., even though the House Intelligence Committee chairman has become a nationally prominent figure due to his important role in the impeachment of President Trump.

After a contestant named Veronica answered a previous question correctly, she selected as her next category, "U.S. Representatives for $1200."

A photograph of Schiff was shown while host Alex Trebek gave the clue: "1/53rd of California's House delegation is this intelligence committee chairman."

After several seconds passed without any contestant hitting the buzzer, Trebek told them, "His name is Adam Schiff."

Schiff has been a popular target for Republicans and other conservatives who oppose the impeachment of Trump. Fox News host Laura Ingraham criticized House Speaker Nancy Pelosi on Wednesday by claiming that she "pulled an Adam Schiff." In November Fox News host Tucker Carlson claimed that Schiff "has spent years obsessing over impeachment like it was a young Jodie Foster. Colleagues say he has pictures of impeachment taped to the walls of his bedroom he has believed to have written in steamy unhinged letters with his own body fluids. So, for Schiff, today's vote was thrilling, in ways that only a court-appointed psychiatrist could fully appreciate."

Two months before that, Carlson claimed that Schiff "recently went into a kind of trance and delivered his own prophetic version of what he believed must have happened between President Trump and the president of Ukraine. Keep in mind, that isn't some guy babbling in the men's room at Starbucks. That is the man who chairs the mighty House Intelligence Committee. We trust him with our most sensitive information, and yet he is clearly — he's demonstrably mentally ill."

Trump has also frequently attacked Schiff, including five tweets since the start of 2020 that describe Schiff as "shifty."

"Pelosi doesn't want to hand over The Articles of Impeachment, which were fraudulently produced by corrupt politicians like Shifty Schiff in the first place, because after all of these years of investigations and persecution, they show no crimes and are a joke and a scam!" Trump tweeted on Jan. 9.

Three days later, he tweeted "George @GStephanopoulos, ask Crazy Nancy why she allowed Adam "Shifty" Schiff to totally make up my conversation with the Ukrainian President & read his false words to Congress and the world, as though I said it? He got caught! Ask why hearing was most unfair & biased in history?"

On the same day Trump tweeted, "Why did Nervous Nancy allow corrupt politician Shifty Schiff to lie before Congress? He must be a Witness, and so should she!"

Two days later Trump tweeted, "Cryin' Chuck Schumer just said, 'The American people want a fair trial in the Senate.' True, but why didn't Nervous Nancy and Corrupt politician Adam 'Shifty' Schiff give us a fair trial in the House. It was the most lopsided & unfair basement hearing in the history of Congress!"

On Wednesday, Trump also retweeted a post by Sen. Marsha Blackburn, R-Tenn., that was critical of Schiff.

While Schiff may be a politically controversial figure, "Jeopardy!" host Alex Trebek is not. He has been the recipient of considerable support after he was diagnosed with pancreatic cancer last year, with one contestant even sacrificing his final answer to tell the ill host that he is loved.