In a fitting series finale, "BoJack Horseman" finds out what it truly means to be canceled

For six seasons we connected with a damaged character who did awful things. In the end, he answers for one of them 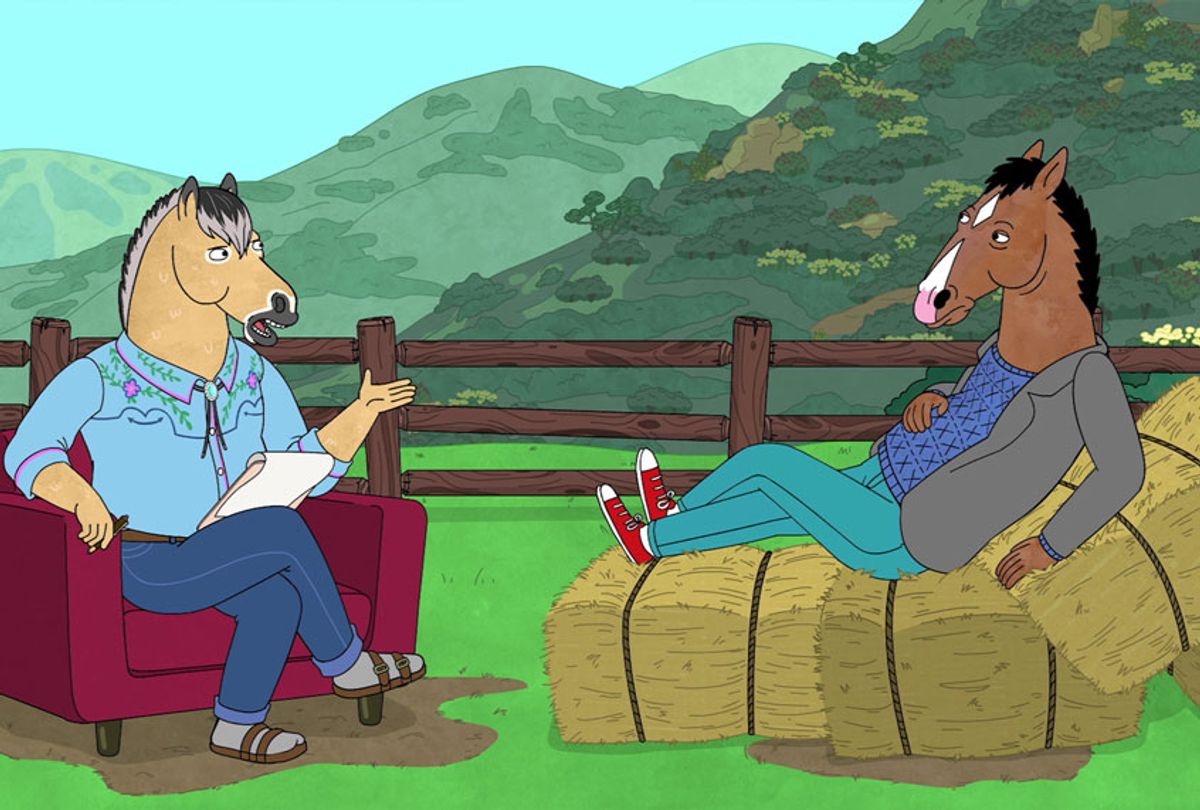 The following article discusses major spoilers from the final episodes of Netflix's "BoJack Horseman." If you're not caught up on the series, stop reading now and go watch it! Past episodes are streaming on Netflix.

This has been a week for walking through doorways into the unknown – for the anxious half of the country convinced we're watching the end of our democracy, for the fictional denizens of a paradise they yearn to escape, and for BoJack Horseman (voiced by Will Arnett). Two of those thresholds are not metaphorical, but they are fictional: "The Good Place" and "BoJack Horseman" each feature openings into the unknown, marking an ending within each series finale.

The similarities end there, however. The door in "The Good Place" represents release, one final gift for benevolent souls whose lives well lived earn them an eternity of bliss and discover that eventually the reward of having anything you could possibly want, forever, is worse than death. Beyond that door is peace.

In the penultimate episode of "BoJack," titled "The View From Halfway Down," the door leads to a black, inky oblivion that BoJack is right to fear. This is one of the series' conceptual episodes that critics love to laud – its very last one, and maybe its most potent because it plays out inside of the character's brain as it's shutting down. The recovering addict has relapsed, an action taken after all his sins catch up to him and the world turns on him. His career dissolves overnight, his reputation is in tatters, and a couple of hefty lawsuits force him to sell his house, leaving him with nothing.

A few humiliations after that, BoJack is drowning in what used to be his pool – and his brain tricks him into thinking he's at a dinner party where he's the guest of honor seated among the people he has hurt the most, and those who have dealt him the most damage, the lot of them dead. The evening ends in a theater, with that doorway to blackness propped onstage.

One by one they tumble in and disappear until the only ones left are Herb Kazzaz (Stanley Tucci), the creator of "Horsin' Around," the '90s sitcom that made BoJack a star. His betrayal of Herb was the first mortal sin in a line of transgressions so long that a person would be forgiven for forgetting some of his worst. And Herb, as he's standing by that door, offers BoJack no comfort as tendrils of black goo reach out from inside and consume him.

"See you on the other side," BoJack tells his companion as he's disappearing.

Herb replies forlornly as the blackness consumes him, "Oh, BoJack. No. There is no other side. This is it."

Except . . . it isn't. The finale reveals that unlike the difficult men after whom he was patterned, the antihero of "BoJack Horseman" survives –- a fate probably worse than death, since it requires the sitcom has-been who made a comeback only to lose everything – dignity and reputation included – to live with his sins. More to the point, his creator Raphael Bob-Waksberg doesn't ask us to forgive him, or celebrate his downfall.

We're simply left in a place that takes us full circle, with BoJack and his friend and unrequited love Diane Nguyen (Alison Brie) sitting in silence on a rooftop mulling over a truth that Diane says in response to the horse tossing off the old chestnut about life being a bitch, and then you die.

Not always, says Diane. "Sometimes life's a bitch, and then you keep living." That in itself is a strange type of justice.

Among the many reasons critics love "BoJack Horseman" is the ways that Bob-Waksberg and production designer Lisa Hanawalt take a format associated with innocence, lightness and rubbery unreality, qualities lovingly rendered in this universe where animals and humans exist as equals, and use it to explore everyone's shadow. Owing to this, "BoJack" has been heralded as one of the most insightful (yet still very funny) shows about depression, addiction, trauma, and damage on TV.

The title sequence riffs on the falling figure in the "Mad Men" opener with good reason, because BoJack has a few things in common with Don Draper. Both men love hard liquor, harbor implacable egos, and display an unhealthy reliance on the women in their lives, whether as enablers or scapegoats. One could say many if not all of the same things about Walter White of "Breaking Bad" or Tony Soprano.

But knowing those men (in the limited way that the audience is allowed to) requires some armchair psychoanalysis and guesswork, whereas "BoJack Horseman" frequently plopped us inside the main character's mind or indulged side trips through the inner consciousnesses of the people surrounding him.

We saw the source of BoJack's internalized damage firsthand, listened to his damning self-talk (a la the episode brutally titled "Stupid Piece of Sh*t"), lived within Diane's depression, and swam through his mother Beatrice's (Wendie Malick) dementia. We were able to take those journeys because cartoons can get away with things that live action series can't.

But there's creative allowance, and there's the ongoing question of what the characters we've grown fond of or care about should be allowed to get away with. With Tony Soprano or Walter White that was easy to answer; maybe we thrilled at our time with them, but these were not lovable men. Their creators were often asked if they were fated to die in the end to pay for all their crimes. One did. The debate still rages on what happened to the other guy.

Whereas "BoJack Horseman" delivers that answer in the form of cancellation – as in utterly and totally cancelling BoJack's fame and comfort without regard for his sobriety or moral improvement, at the same time the show itself was canceled.

Regardless of BoJack's personal efforts to turn over a new leaf and live a better life, the writers never excuse the damage he's caused, and these last episodes force him to answer for some of it.

Not all – there's still the traumatic memories he's left behind for the teenager who nearly binge-drank herself to death with the liquor he procured for her, and she's still sorting them. There's the rage still hanging on inside of an old flame who rejected BoJack's sexual overtures, only to find him in a compromising position with her adolescent daughter.

There's the co-star of "Philbert," his noir-drama in which he plays a sullen anti-hero cop, a woman he choked during a drug-fueled blackout, who participated in the cover-up of her own assault for the good of her career.

There's his betrayal of Herb, his cowardly treatment of Diane, the many times he has abused and abandoned his friend Todd (Aaron Paul). BoJack doesn't have to answer for any of that or the other failures and cruelties not listed here.

Instead his undoing comes down to just one thing that a dogged tabloid reporter digs up, and that is his role in the death of his "Horsin' Around" co-star Sarah Lynn. What nails him is the detail that he provided her with the heroin she overdosed on. Worse, when he realized she was dead, he left her there for nearly 20 minutes in order to fabricate what was a plausible alibi.

"What if I get sober," he asks at the start of the season, "and I'm still the same awful person I've always been, only sober?" In the writers' collective view, those efforts don't matter. His successful rebranding as Professor Horseman, drama teacher at a respected East Coast school, is wonderful – for him. It does nothing for the people he hurt.

Even in sobriety BoJack's weaknesses still rule him, and his friends are called to save him from himself yet again when the reporter armed with his destruction dials his number. Even then, he fails them. Again.

His ever-faithful agent/manager/ex Princess Carolyn (Amy Sedaris) even scores a TV interview designed to cut off the print expose at the knees, in which BoJack solemnly confessed not to everything, but to enough of the things he did.

For a day, it seems to work. People approach him, moved by his candor and his appearance of contrition. And this wakes up his oldest addiction, his craving for validation. He's more enamored of his performance than he is genuinely sorry for contributing to the death of a trusted friend.

His ego is so fluffed, in fact, that he agrees to a second interview against Princess Carolyn's advice. And this is where the TV interviewer, newly armed with information from the tabloid reporter, nails BoJack to the wall.

An episode later, he's drowning in a pool that used to belong to him, but is now the property of another family. In the episode that follows, he wakes up handcuffed to a hospital bed, a way station before a prison sentence – "officially breaking and entering," he later tells his fellow actor and frenemy Mr. Peanutbutter (Paul F. Tompkins) "but I think it was kind of for everything."

And isn't this what we want when we talk about cancelling celebrities who deserve to be canceled?

It's a fascinating psychological test, these ending installments. Their coincidental landing in the opening days of the Harvey Weinstein trial give them an extra level of . . . not quite discomfort, but something else. Maybe the term is inquisitiveness.

Oh, I don't think the "BoJack" writers are arguing at all in favor of forgiving these men or suggesting we attempt to understand what motivates them. The figures responsible for inspiring the #MeToo movement's kick into high gear deserve every bit of obscurity they have coming to them.

At least BoJack has the luxury of being a fiction and an absurd one at that – a horse man who used to be romantically involved with a cat, who nursed an unrequited love with a human woman who fell in love with, married and divorced his best friend, a dog, before a very loyal and supportive buffalo sweeps her off her feet.

The finale itself closes our time with "BoJack Horseman" by calling upon another time-honored trope of sitcom, with a wedding that offers a happy ending to one person in BoJack's life, Princess Carolyn. Diane also has moved on, as has Todd and, it seems, Mr. Peanutbutter.

BoJack, however, still has a sentence to serve out, one that may follow him for the rest of his days. From here on out, though, it looks like he's mostly on his own.

Then again, this is Hollywood – or Hollywoo, or Hollywoob, whatever the cartoon version of town ends up calling itself from here on out. That iconic sign might change, but some truths never do. "People have short memories. It's the best and worst thing about people," Princess Carolyn tells BoJack as the slow dance at her wedding reception, hinting that even though our time with this show is over, BoJack's cancellation might not be. And I struggle with how to feel about that.

All six seasons of "BoJack Horseman" are currently streaming on Netflix.