Don Lemon, this is no laughing matter

When CNN's hosts and anchors behave more like entertainers, it makes it harder for journalists to do their jobs 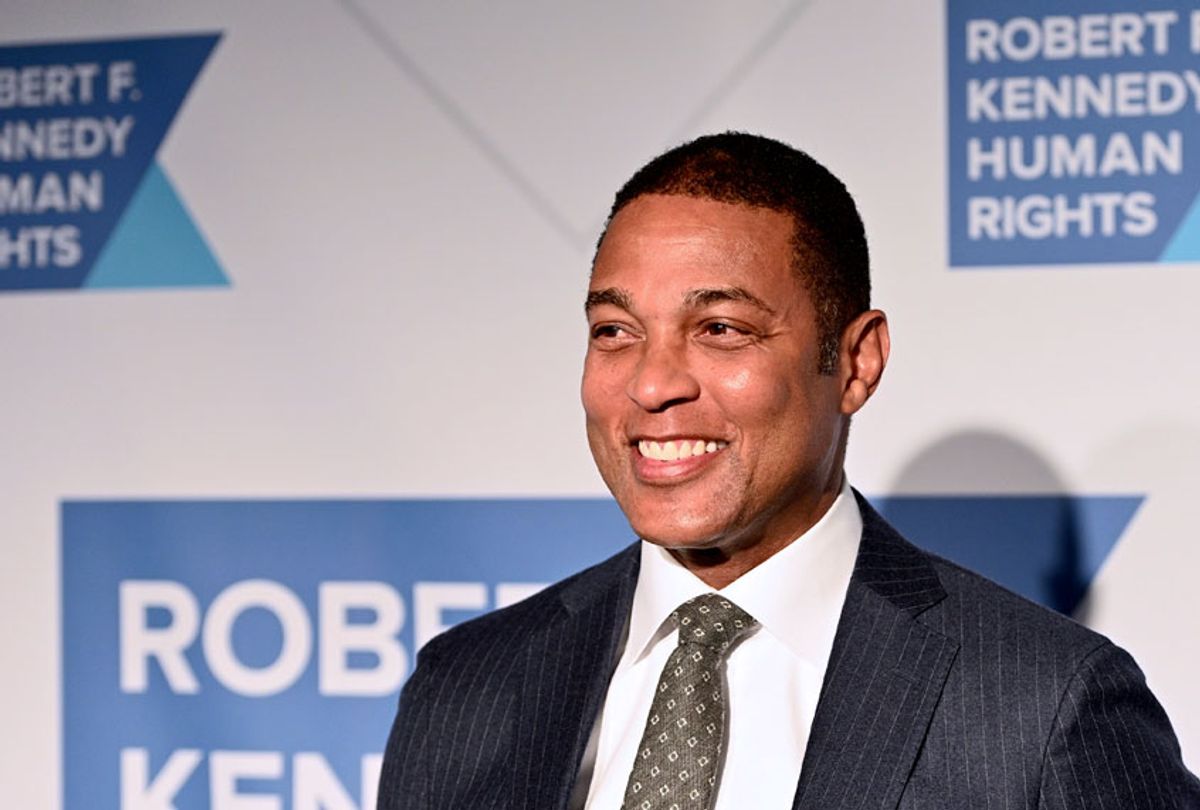 Five years ago Don Lemon was a functional punchline.  A profile in GQ magazine had a field day with a detail shared by the interviewer, that he pronounced sorbet with a hard "T" – and in fact, was insistent on doing so. Back then if the "CNN Tonight" anchor broke his composure on air, it would have been no big deal. People would have expected it, in fact.

Proving how extremely that cultural tectonic places have shifted over the past five years, these days Lemon is . . . well, he's still something of a lightweight. Watching CNN broadcast him getting, in his own words, "litty lit" in New Orleans on New Year Eve 2019 was more eye opening than anything that happened that night in Times Square.

Outside of that, however, he's also attracted notice for positive reasons. In 2018, while media colleagues in other newsrooms and his own shied away from calling out Donald Trump and his cronies on their racism, Lemon flat out called it like it is.

When Trump surrogates' lackeys attempted to disempower Lemon on the air, he firmly stopped them in his tracks. He still produces his share of gaffes, but overall Lemon has gone a long way towards comeback from 2014, when the Columbia Journalism Review named him one of the worst journalists of that year.

Recently, however, Lemon went viral for breaking his composure on air, doubling over with guffaws, as Republican strategist Rick Wilson and fellow CNN contributor Wajahat Ali went after Trump's supporters, a group Wilson describes as the "credulous boomer rube demo."

Wilson and Ali joined Lemon on Saturday, Jan. 25 to discuss the tense interview NPR host Mary Louise Kelly conducted with Secretary of State Mike Pompeo that took place the day before. Pompeo had cut it short after Kelly pressed Pompeo about how he treated former U.S. Ambassador to Ukraine Marie Yovanovitch, one of his employees.

Kelly went on to describe to the audience what happened after the recording stopped. According to her report, Pompeo then summoned her into another room and laid into her with curse words and accused her of ambushing him on-air with questions about Ukraine. He also accused her of not being able to find Ukraine on a map.

When Lemon asked Wilson for his interpretation of the incident, the contributor did not mince words. "He's just trying to demean her, and obviously it's false," Wilson says, according to a CNN transcript. "And look, he also knows deep in his heart that Donald Trump couldn't find Ukraine on a map if you had the letter U and a picture of an actual physical crane next to it."

This is where Lemon loses it, effectively egging Wilson on with his energetic giggles. Wilson goes on to retrain his aim and take swings at Trump's supporters, adopting a cornpone version of a Southern accent saying his supporters "[want] to think that Donald Trump's a smart one, and y'all – y'all elitists are dumb."

Then Ali, also laughing, gets in on it, doing his own imitation.

ALI: You elitists with your geography and your maps and your spelling even though --

WILSON: Your math, your reading.

ALI: Yes, your reading, you know. Your geography knowing other countries. Sipping your latte.

WILSON: All those lines on the map.

ALI: Only them elitists know where Ukraine is. Sorry. I apologize.

Well, he did in that moment. Ali was less than contrite a few days afterward, when the right-wing website The Daily Caller tweeted the clip and helped it go viral. "America, this is what CNN thinks of you," it read.

"We did," Ali tweeted in response.  "Not going to apologize for it either. If you're willing to believe and promote these absurd and dangerous lies, well, you deserve to be mocked for it."

Ali can say that, because he's a CNN contributor. Not an anchor of a prime time news program.

Broadcast and cable news outfits all have a bench of such analysts and commentators, some of them known for spewing downright repugnant view and blatant lies.

Even CBS, the newsroom of Edward R. Murrow, hired Trump's former waterboy Reince Priebus to be an on-air contributor. They are a terrible symptom of the urge to present every side of an issue, even if one "side" happens to be truth backed by data. And these contributors are free to weigh in on any issue placed before them, and say or do whatever they want – which is a huge part of what's wrong with the media and its stubborn addiction to promoting false equivalency.

Lemon's reaction to those comments, however, highlights a bigger problem right now, not just for CNN but for journalists in general. An anchor at a supposedly centrist news organization like CNN is obligated to keep his or her emotions in check – more so, I'd argue, than anchors in other broadcast and cable newsrooms. This is even true of an anchor/commentator like Lemon, who is tasked with covering the news of the day and offering his own take.

The Trump years have been tough on the media in general, and CNN in particular. White House correspondent Jim Acosta is the favorite whipping boy of the administration and its enablers, and only recently Lemon's CNN colleague Manu Raju was insulted on-camera by Arizona Republican Sen. Martha McSally. When he asked the reasonable question of whether she believed the Senate should consider new evidence in the impeachment trial, she responded by calling him a "liberal hack" and stalking away.

Later she awkwardly attempted to parlay that moment into a campaign fundraising video and, predictably, dropped by Laura Ingraham's Fox News program to crow about it, only to balk as Ingraham attempted to pose the same question to her.

So in succumbing to his urge to laugh uncontrollably at a cheap dig stereotyping an entire segment of the population, Lemon gives trolls the green light to keep on attacking all working journalists, and not just the ones on CNN.

That he did it as he was discussing the ill-treatment of a journalist who was doing her job evenly and objectively, and who a high-ranking government official later attempts to smear by lying about her journalistic integrity and her intelligence, is even more frustrating.

Because behind the snickering and playground meanness, what Wilson says about Pompeo is true: the Secretary of State was playing to Trump's base by mistreating Kelly, knowing that her straight-laced professional and ethically sound comportment could be spun as unreliable and weak to an audience that equates unhinged fury and mockery as a display of might.

That same base that conflates the work that Kelly and other NPR journalists do with coverage seen on NBC, MSNBC, CBS, ABC and, yes, CNN. All of them – all of us – are lumped together to form one gigantic amoeba of smug elitism, the out-of-touch liberal media that looks down its nose at people in the flyover states.

And if those people believe they're being laughed at, they won't believe those same newscasters and reporters when they attempt to educate them on the ways that one political party is subverting democracy to engage in a power grab that will diminish our collective power while consolidating and expanding their own.

This is why the Republican National Committee immediately grabbed the clip of Lemon, Wilson, and Ali and made it the centerpiece of a campaign ad. "They think you're a joke," it says at the end, "Prove them wrong in November."

On the Tuesday night show that followed the segment, Lemon attempted to do some damage control during his opening monologue. "Ask anyone who knows me, they'll tell you I don't believe in belittling people, belittling anyone for who they are, what they believe or where they're from," he said, referring to the Saturday night gaffe as a joke he found humorous in the moment. ". . . I didn't catch everything that was said. Just to make this perfectly clear, I was laughing at the joke and not at any group of people."

Except, however, the joke was about a group of people.

Taking issue with Lemon's laughter has nothing to do with being concerned over the hurt feelings of Trump voters, by the way. An entire line of T-shirts declares to the world that they do not care one bit about anyone else's feelings. Personally I'm fine with that, and I can say as much because I am not an network anchor.

But I am someone who wants the news organizations tasked with delivering solid truths in these dangerous times clouded with conspiracy and lies to be up to the task in front of them. The people most offended by Don Lemon aren't watching him and wouldn't be interested in the non-apology he offered days after the incident. They will, however, gladly accept this gift Lemon has given to their leaders, one that will strengthen their cause of discrediting fact and selling lies of convenience. Trump's base will swallow it whole, and it'll go down with all the ease of sorbet.