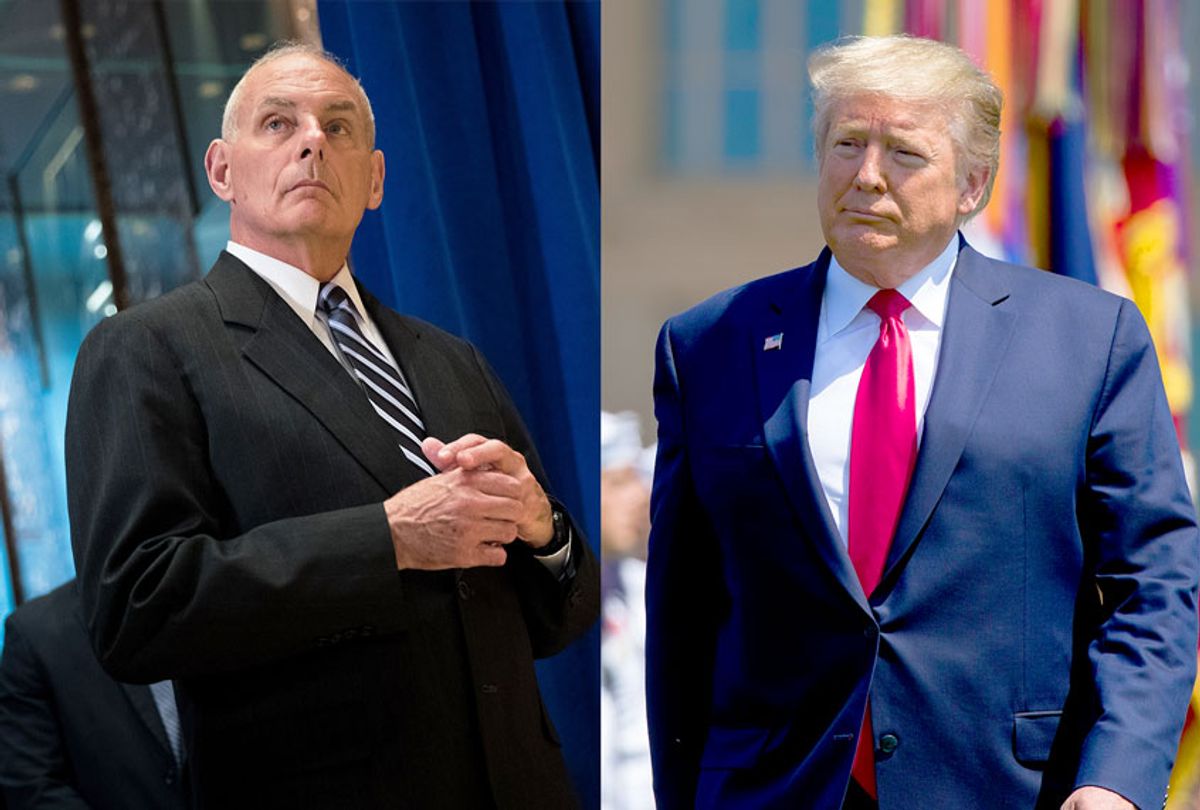 Donald Trump told John Kelly to "keep his mouth shut" Thursday after his former his former chief of staff defended a military officer who testified against the president during the impeachment inquiry, saying soldiers are taught to never follow an "illegal order."

"When I terminated John Kelly, which I couldn't do fast enough, he knew full well that he was way over his head," the president tweeted. "Being Chief of Staff just wasn't for him. He came in with a bang, went out with a whimper, but like so many X's, he misses the action & just can't keep his mouth shut, which he actually has a military and legal obligation to do."

Kelly, a retired four-star Marine general, stood up for Army Lt. Col. Alexander Vindman, who served on Trump's national security council until being fired earlier this week, during a Q&A session Wednesday at Drew University about his experiences working in the West Wing covered by The Atlantic. The former White House chief of staff argued that Trump effectively gave "an illegal order" when he solicited Ukrainian President Volodymyr Zelensky to investigate his political rivals, and Vindman acted appropriately when he reported it.

Earlier in the session, Kelly said Vindman "did exactly what we teach them to do from cradle to grave. He went and told his boss what he just heard." Because former President Barack Obama established a policy of defending Ukraine from Russian invasion, Kelly added: "When the president said that continued support would be based on X, that essentially changed. And that's what that guy [Vindman] was most interested in."

Vindman was smeared with claims of dual loyalty by the president and his allies after he testified to House investigators. Fox News host Laura Ingraham described him as "a U.S. national security official, who is advising Ukraine while working inside the White House, apparently against the president's interest." Her colleague Tucker Carlson called into question Vindman's allegiance to the U.S. because he had been offered the position of Ukrainian defense minister. (Vindman notified appropriate counterintelligence personnel and turned that position down.) Shortly before firing Vindman, Trump tweeted that he was "insubordinate" and had received a "horrendous report" from his superior.

Kelly criticized Trump on Wednesday for matters beyond the smears targeting Vindman. He denounced Russian President Vladimir Putin (whom Trump has praised), characterized the president's peace negotiations with North Korea as "futile" and said the media is not "the enemy of the people" (a frequent claim of his former boss). Kelly also defended migrants, a group whom Trump first maligned when he announced his presidential campaign in 2015.

"They're overwhelmingly good people . . . They're not all rapists and they're not all murderers," Kelly said. "And it's wrong to characterize them that way."

This is not the first time Kelly has criticized Trump since leaving the White House. He defended John Bolton last month after it was revealed that the former national security adviser wrote in a manuscript of his upcoming book that the president withheld military aid appropriated by Congress to Ukraine as he sought investigations into his political rivals.

"If John Bolton says that in the book, I believe John Bolton," Kelly told an audience in Sarasota, Fla. He later added that when it came to the question of Bolton's credibility, "every single time I was with him . . . he always gave the president the unvarnished truth.