The British rock band has an eclectic discography that defies simple labels and apparently, time 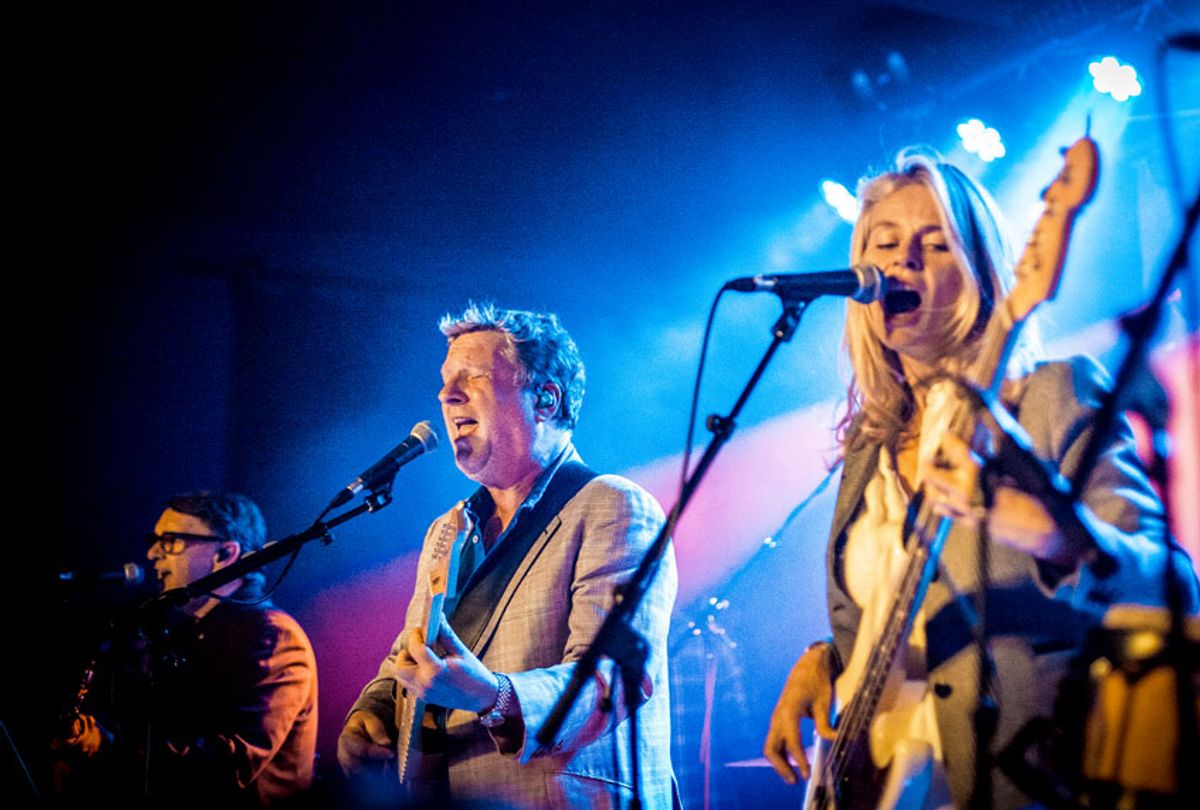 Near the end of February, Squeeze opened for Hall & Oates at Madison Square Garden. On the surface, the pairing might seem strange: The latter favors blue-eyed soul and effervescent '80s pop, while the former has roots in the grand tradition of clever British songwriting tinged with pub rock and power pop.

However, the current iteration of Squeeze — which, in addition to core principal members Glenn Tilbrook and Chris Difford, features multiple additional live musicians — is leaning heavily into influences that make them sonic bedfellows with Daryl Hall and John Oates.

At Madison Square Garden, freckled organ burbled throughout the brisk, Motown-esque "Hourglass"; Tilbrook took center stage and belted out a bluesy "Tempted," which also boasted a cappella backing vocals; and "Black Coffee In Bed" was a snappy, extended soul revue with crisp grooves and harmonies.

Of course, Squeeze also showcased plenty of the quirkier new wave gems that made them chart darlings in the late '70s and early '80s. The syncopation clinic "If I Didn't Love You" and giddy "Slap and Tickle" boasted loopy synths and Difford and Tilbrook's inimitable twin lead vocals, while the jaunty "Cool For Cats," featuring Difford on droll lead vocals, boasted a trippy, psychedelic-prog bridge.

On Instagram, the latter made reference to the fact it was the third time Squeeze had played the storied New York City venue. The other times came in 1982, when the opener was A Flock of Seagulls, and in 1987, when Squeeze was at the height of their U.S. success thanks to the album "Babylon and On."

Few bands rise back to playing arenas after dropping down to smaller venues, even as opening acts — and fewer still get an arena bump-up again three-plus decades later. However, Squeeze is in an enviable place: The U.K. band is also touring as Hall & Oates' opening act in big outdoor amphitheaters this summer — and, in the last few years, they've established a robust road presence in the U.S. that's translated to sold-out headlining theater shows and well-attended treks with groups such as X.

That Squeeze reliably tours America — and makes sure to hit cities all over the country, not just major markets — goes a long way to explain why they're enjoying this successful run. The band also has more indelible songs than you might think: In addition to two Top 40 U.S. hits ("Hourglass" and "853-5937," both from "Babylon and On") and several rock radio favorites ("Tempted," "Black Coffee In Bed"), they have a ton of shoulda-been hits, including the piano-sprinkled "Pulling Mussels (From the Shell)" and the pop Rubik's Cube "Is That Love."

Perhaps even more important, Squeeze is no nostalgia act: In recent years, they've released two fine albums, neither of which resemble any other full-lengths in their catalog.

The first album, 2015's "Cradle to the Grave," brims with colorful textures: the funk-flecked '70s rock throwback "Nirvana," the string-driven baroque-pop gem "Sunny" and the Elvis Costello-like genial twang of "Haywire." Two years later came "The Knowledge," which in some respects is more experimental — "Rough Ride" alternates between trilling opera singing and sinewy disco beats — and in other ways embodies classic Squeeze lyrical tropes. Bittersweet, nostalgic pop songs such as "Patchouli" and "Departure Lounge" begat a tune such as "Please Be Upstanding," a (cheeky but tender) song about issues with bedroom performance.

That creative urgency translates to the stage, in no small part due to the band's enthusiastic auxiliary musicians: percussion/vocalist Steve Smith, who's also the leader of Dirty Vegas; drummer Simon Hanson; and keyboardist Stephen Large. (Until recently, the lineup also featured bassist Yolanda Charles, who also brought dynamic sonic charisma to the band.) Although bands are often criticized for having an ever-changing lineup, the group harnesses their player changes skillfully: Over the years, each version of the band has brought slightly different energy and strengths to the table, which also makes each Squeeze tour a new experience.

For example, in recent years, the current lineup configuration rearranged the band's 1978 debut single, "Take Me I'm Yours," to be a busking-worthy tune with accordion and spare percussion, while "Slap and Tickle" assumed a massive synthesizer opening. Squeeze was already one of the most distinctive groups to emerge from the fertile late '70s U.K. rock scene, thanks to their effortless combination of punk, soul, rock, and synth-pop — and their current lineup preserves that adventurous spirit.

However, an inventive approach works best when the bones of songs are good, which is another major reason Squeeze remains so vital: impeccable songcraft. The band's approach to writing involves a strict division of labor: Difford pens lyrics and Tilbrook handles the music. Naturally, early in their career, the pair was tagged with a Lennon and McCartney comparison that's stuck to this day.

In a 2019 interview with Arizona Central, Difford downplayed the label. "I didn't really figure it out," he says. "We never had any of our songs covered like the Beatles. We didn't have the same kind of popularity. I think it was a bit of lazy journalism in a way just because there were two songwriters."

Still, in the same interview, he admitted the duo's working relationship offers unexplainable alchemy. "There's a bit of magic in that, when you deliver a lyric and then somebody delivers the music and you don't have to correspond about what you've done," he said. "You just know that it's good. That's a really amazing feeling. It's like having two arms but on different bodies."

In a fitting nod to this image, many of Squeeze's recent headlining shows have fallen under "The Difford and Tilbrook Songbook" name, which has given the duo a chance to dust off some chestnuts (the sophisto-pop gem "Love's Crashing Waves," from the record they released as Difford & Tilbrook) and deeper album tracks (the piano-jittery "Mumbo Jumbo," from 1981's "East Side Story"). But this moniker also imbued the band's catalog with a certain amount of gravitas that's well-deserved and even long overdue: Squeeze's body of work isn't easy to pigeonhole, but it's full of piercing emotional insights and witty observations that touch the brain and the heart.

Check out the band's official website for the Squeeze Songbook 2020 Tour dates and tickets.