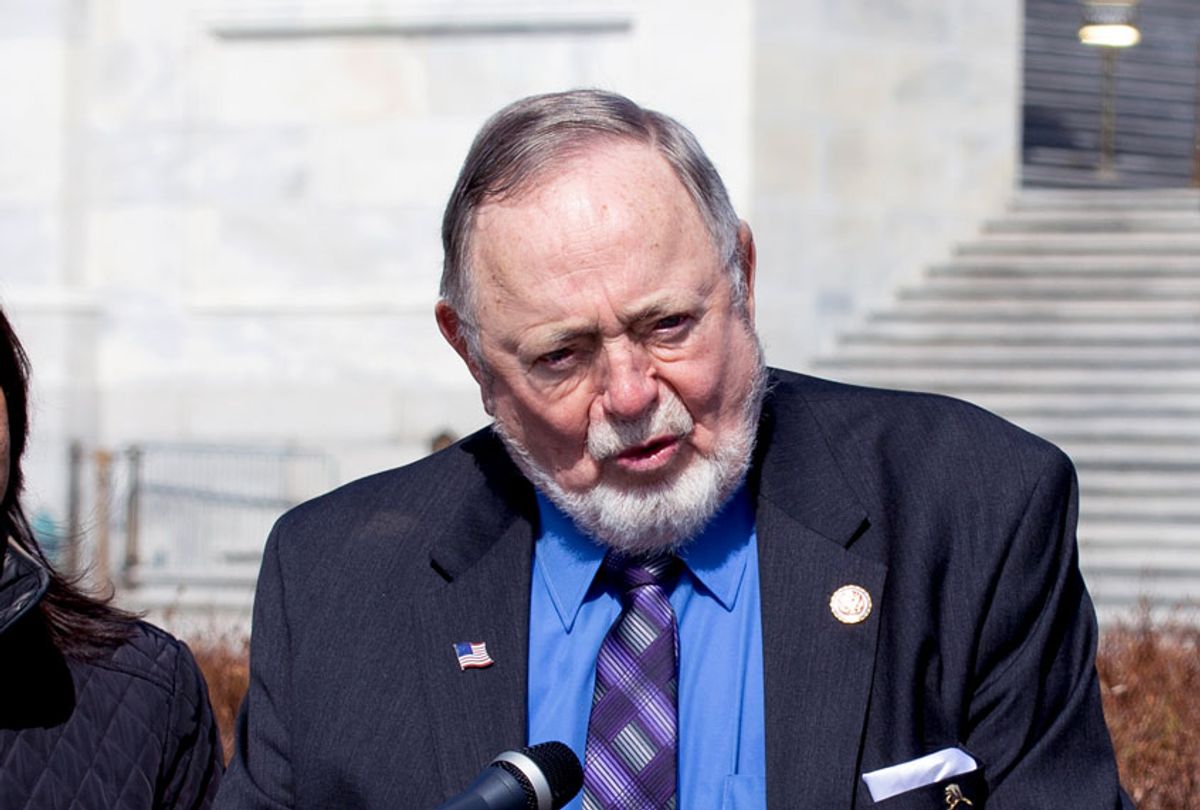 A Republican congressman dismissed the coronavirus as "the beer virus" during a meeting with his constituents in which he downplayed the significance of the global pandemic.

"This beer virus I call it — they call it a coronavirus, I call it a beer virus — how do you like that?" Rep. Don Young, R-Alaska, told a group of senior citizens and Chamber of Commerce members in Palmer, Alaska, on Friday. "It attacks our senior citizens. Now, I'm one of you. I still say we have to as a nation, as a state, to go forth with our everyday activities."

Young characterized the widespread public concern about the pandemic, which he again referred to as "the beer virus," as overblown. He criticized the president's $50 billion stimulus package as an attempt "to borrow the money from future generations to solve the problem right now that's been created primarily by hysteria."

He later added that "this is blown out of proportion about how deadly this is. It's deadly, but it's not nearly as deadly as the other viruses we have. But we respond to — I call it the hysteria concept. Most of this medical equipment we're using, 85 percent is coming from China. That's wrong, guys, and I blame the pharmaceutical companies."

There is no evidence that the coronavirus was manufactured by pharmaceutical companies or developed by China as a bioweapon, though it is unclear if Young was attempting to suggest either. Young followed President Donald Trump's initial pattern of downplaying the significance of the outbreak. Trump previously — and falsely — insisted that diagnoses in the U.S. were "going very substantially down — not up."

Young has a documented history of making controversial remarks. He claimed that the 2010 BP oil spill in the Gulf of Mexico was "not an environmental disaster" but "a natural phenomena," used an anti-Latino racial slur when discussing the ranch hands who used to work for his father in 2013 and dismissed arguments that suicide is caused by mental illness in 2014.

Other conservatives have also downplayed the significance of the virus. The Daily Caller editor-in-chief Ben Shapiro argued that "the amount of sheer panic that seems to be roiling the public is overstated based on the available information," while former Fox Business host Trish Regan claimed "this is impeachment all over again. And like with the Mueller investigation, like with Ukraine-gate, they don't care who they hurt. " Subsequent reports indicated that Regan was "unlikely to return" to the network.

Even though there are reports of Corona beer losing business as a result of the pandemic, the company released a statement last month saying that "based on recent IRI retail trends, sales of Corona Extra remain strong, with dollar sales up 5% in the U.S. per the latest 4-week period ended Feb. 16, nearly doubling the 52-week trend for the brand."