Trump's politics of revenge: He's still picking winners and losers in a pandemic

Trump's petty, personal feuds and his hunger for approval will cause deaths — and expose Republican ideology 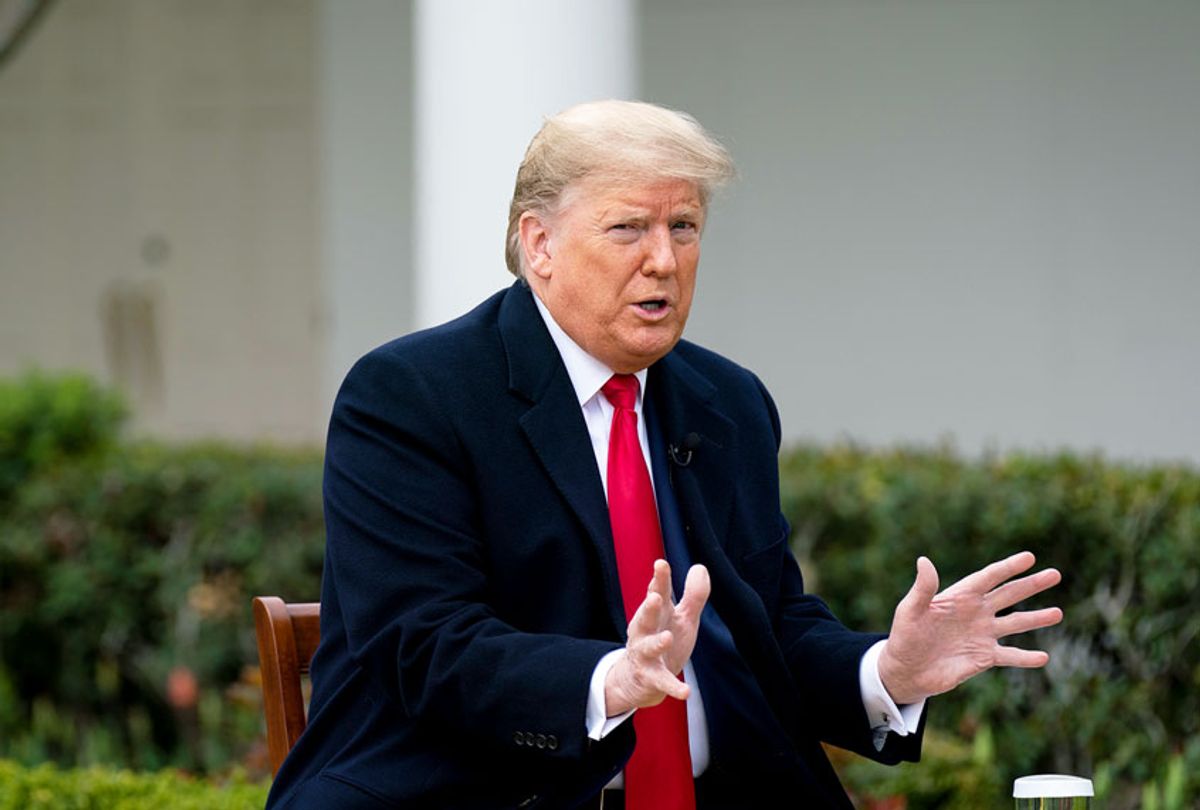 There is no "presidential" pivot coming from Donald Trump. That was clear long before his surprise election victory in 2016, but has never been as painfully evident as it is in the middle of this global pandemic. Faced with a deadly pathogen he can't simply mock into submission (although he's trotted out the Twitter nickname shtick to distract from his failures), President Trump has returned to familiar territory: revenge politics.

From his signature corporate tax cuts, which eliminated deductions for state and local income taxes that disproportionately hit blue states, to his legal battles with attorneys general in coastal states like New York and California, President Trump has spent much of his first term sticking it to his political enemies. It's as close to a consistent ideology as anything he's ever displayed.

In Puerto Rico, where elected officials publicly criticized his handling of Hurricane Maria, Trump sought to stop federal aid to the recovering island. In Ukraine — a nation he was half-convinced had conspired against him — the president attempted to extract an investigation of Joe Biden in exchange for congressionally-mandated aid. In the midst of this coronavirus pandemic, he appears to prioritize petty fights with Democratic leaders of the blue states that have been hit hardest so far.

In New York, Mayor Bill de Blasio recently warned that hospitals are less than 10 days away from shortages in "really basic supplies" needed to protect health care workers and patients alike. Trump was born and raised in New York, as de Blasio noted on Sunday's "Meet the Press," yet "he will not lift a finger to help his hometown."

"I don't get it," the mayor continued. "Right now, I have asked repeatedly for the military to be mobilized, for the Defense Production Act to be used to its fullest to get us things like ventilators. … If the president doesn't act, people will die who could have lived otherwise."

The Trump administration made a big show of signing an executive order invoking the Defense Production Act, which allows the federal government to compel private manufacturers to produce badly needed materials. But it has become clear in the ensuing week that there are no plans to enforce corporate cooperation — reportedly at the behest of Trump's son-in-law, Jared Kushner. When governors sought assistance from the federal government in the procurement of much needed medical supplies last week, Trump suggested they fend for themselves, saying the the federal government was not "a shipping clerk." Then he outbid them.

Even when the Trump administration has stepped up to lend a hand, the distribution of aid has been noticeably misaligned with the realities on the ground. In Florida, a state which voted for Trump but hasn't yet seen an explosion of cases, officials received 100% of the medical supplies they requested earlier this month within three days. New Jersey, however, received less than 6% of its February request — more than two weeks later. FEMA had provided just 400 ventilators to New York, one of the hardest-hit states, as of Tuesday morning. Gov. Andrew Cuomo had requested 30,000.

"It's a two-way street — they have to treat us well too," Trump said after Cuomo, a Democrat, complained. "He should've ordered the ventilators," Trump said of during a Fox News town hall on Tuesday. "They can't blame us for that. Gov. Cuomo is supposed to be buying his own ventilators." This appears to be the continuation of a long-running feud.

I'm seeing Governor Cuomo today at The White House. He must understand that National Security far exceeds politics. New York must stop all of its unnecessary lawsuits & harrassment, start cleaning itself up, and lowering taxes. Build relationships, but don't bring Fredo!

"The only way we can obtain these ventilators is from the federal government," Cuomo said in response, noting that the state was able to procure just 7,000 ventilators. "Not to exercise that power is inexplicable to me."

By refusing to actually invoke the Defense Production Act to rush the production of much-needed ventilators, and then blaming Democrats for not being nicer to him, the notoriously thin-skinned president appears to be prioritizing his ego over people's lives. At this point that's no huge surprise, but it's worse than incompetence. It's exploiting a crisis to wreak revenge.

Trump's refusal to help states get enough supplies will almost certainly have deadly consequences. Several states have policies that ration care at the expense of people with disabilities — and hospitals are rapidly being overrun.

In the midst of a pandemic, Trump is relying on petty politics to pick winners and losers.

His coronavirus task force, for example, includes a former lobbyist for Gilead, a pharmaceutical firm. This week, a Gilead drug was granted "rare disease" status that allows the company to profit from it exclusively for seven years, even as it is likely to severely limit supply. Gilead shut down its emergency access program, just as its stock price rose.

Treasury Secretary Steven Mnuchin has warned that the U.S. jobless rate could hit 20%, a rate double that of the worst unemployment level of the 2008 recession, but the Trump administration continues its fight to kick nearly 700,000 people off food stamps. And while much of the nation is distracted by concerns over the spread of COVID-19, the Trump administration has canceled public hearings on plans to gut environmental regulations, while maintaining the rule-making schedule. Anti-union rules have similarly been hurried through in the shadow of this crisis.

Of course, like almost all things Trump, his behavior is just the unvarnished version of modern Republican thinking. Senate Republicans proved this week that they had no principled objection to government picking winners and losers, just partisan opposition. The purveyors of free-market capitalism are suddenly eager to embrace another bailout of corporate America — now that a Republican is back in the White House. This time they even wanted the executive branch to have sole discretion over the allocation and distribution of aid, a far cry from their complaints about the Obama administration. What could go wrong with Mnuchin picking the winners and losers with no public review, during the months just before a presidential election?

Trump has laid bare, not for the first time, what lies so much of Republican orthodoxy is built upon. With his rush to return to normal as the coronavirus spreads across the nation and his suggestion that sacrificing the sick and the elderly is an acceptable compromise, he's revealed the GOP to be exactly as callous as its policy preferences over the last several decades have indicated. This pandemic has stripped off the Republican facade, at least.