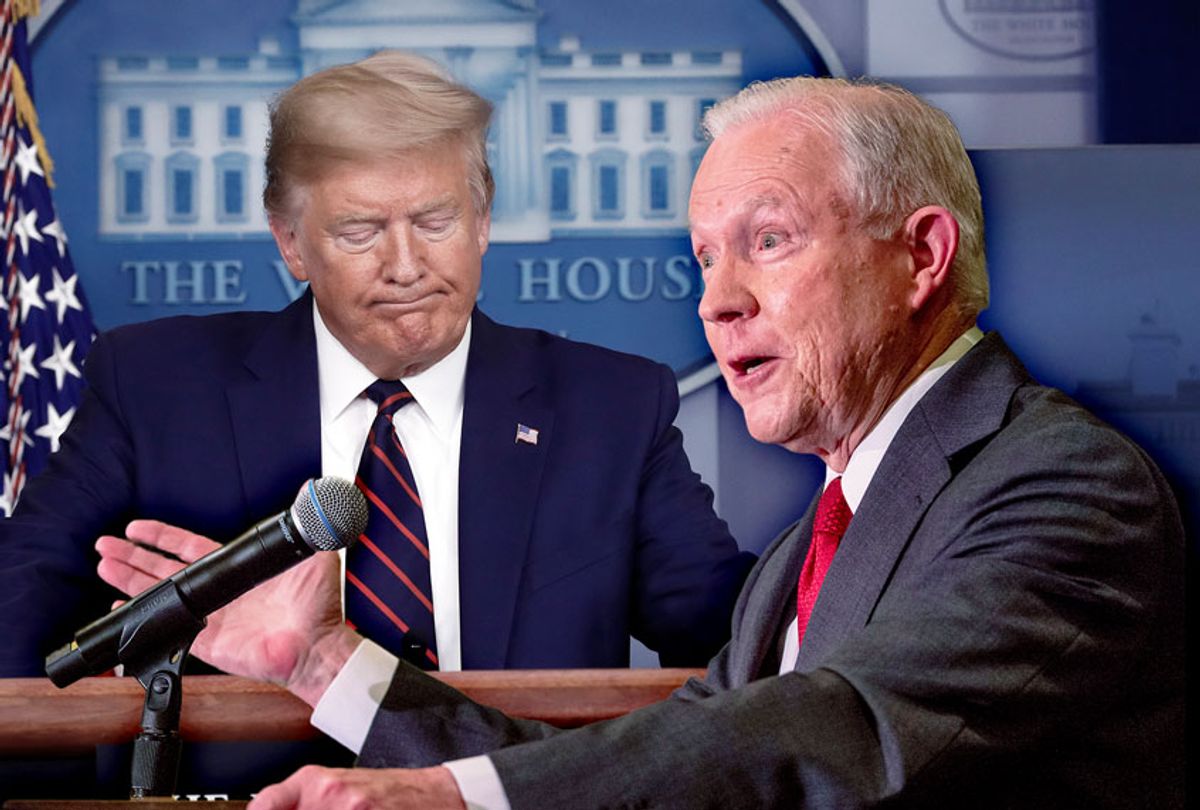 Donald Trump's re-election campaign sent a letter to Jeff Sessions Tuesday accusing him of attempting to "confuse" the president's supporters into believing that he supports his former attorney general's Senate campaign in Alabama.

"The Trump campaign has learned that your U.S. Senate campaign is circulating mailers like the one I have enclosed, in which you misleadingly promote your connections to and 'support' of President Trump," Michael Glassner, chief operating officer of Trump's campaign, wrote in the letter obtained by The New York Times.

According to Glassner, one of Sessions' letters and donor forms directly mentions Trump on 22 occasions and "even makes the delusional assertion that you are President 'Trump's No. 1 supporter.'"

He concluded, "We only assume your campaign is doing this to confuse President Trump's loyal supporters in Alabama into believing the president supports your candidacy in the upcoming primary run-off election. Nothing could be further from the truth."

Sessions campaign spokeswoman Gail Gitcho told The New York Times that "Alabamans don't like to be told what to do."

Moore then lost to Democratic candidate Doug Jones after a number of women accused the former state Supreme Court judge of sexual misconduct. Jones became the first Democrat to serve as a statewide senator since Howard Heflin, who left office in 1997.

Gitcho's statement to The Times concluded by claiming that Sessions was "indeed one of the strongest supporters of President Trump and his agenda" — and "no one can change that."

Trump and Sessions used to be close friends. Their relationship began in 2005, when Sessions invited Trump to be an expert witness in a congressional hearing about the cost of U.N. renovations. When Trump ran for president in 2016, Sessions was the first sitting U.S. senator to endorse his presidential campaign. His loyalty was rewarded when the future president-elect appointed Sessions as his attorney general.

But the Alabaman fell out of favor with the president after he recused himself from the Russia investigation in 2017, a move which paved the way for former special counsel Robert Mueller's probe into Trump's campaign. After spending the next several months publicly badmouthing Sessions' performance, as well as ridiculing him in general, Trump fired his attorney general in late 2018.

Trump's grudge against Sessions has endured since the Alabaman's departure, with the president endorsing Sessions' opponent for the Republican Senate nomination: former Auburn University football coach Tommy Tuberville. Tuberville and Sessions are engaged in a run-off election after neither candidate received a majority of their party's votes in last month's primary. The winner will earn the right to challenge Jones.

Sessions embraced the Trump legacy in his post-election speech, saying that "anyone can say they are for the Trump agenda, but talk is cheap. But I have fought on the great issues of our day and won. I have stood alone on facts and principles and won."