"This is giving people a tremendous opportunity to be somewhat introspective," the Fox News judge adds 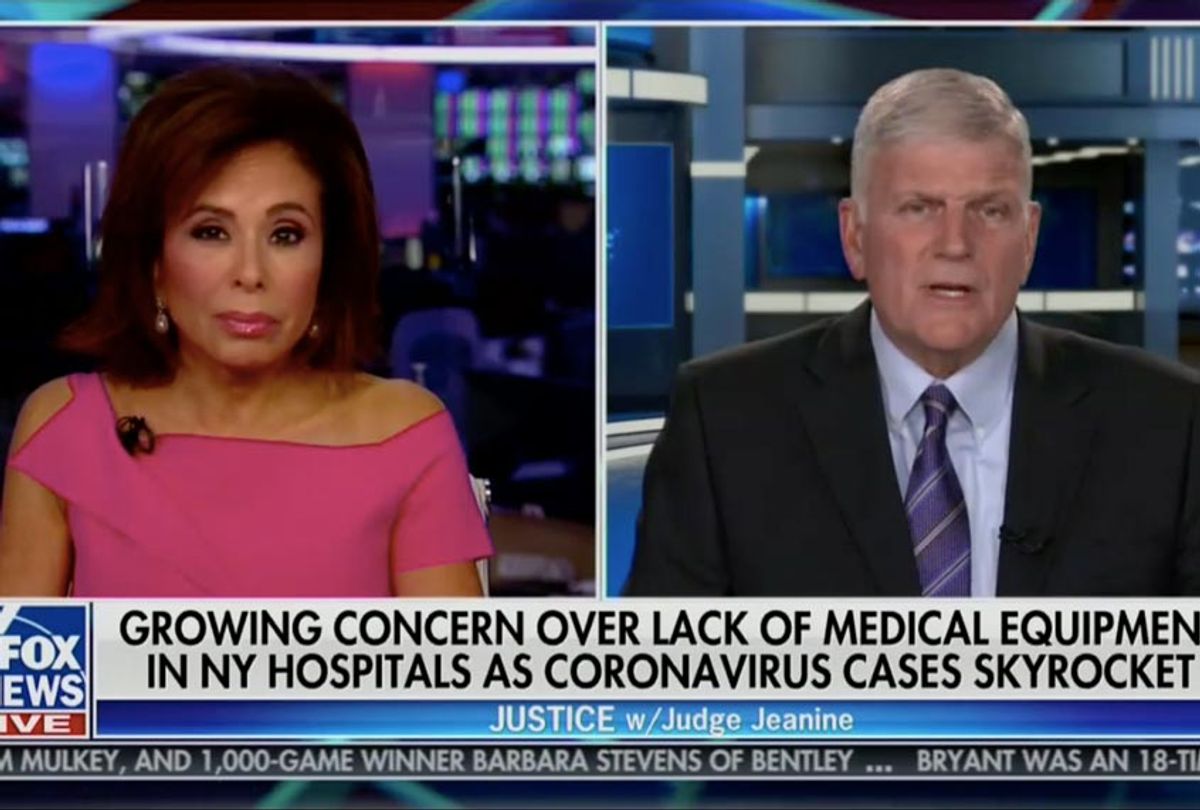 Correction: Due to an editing error, an earlier version of this story incorrectly listed the number of positive cases at Liberty University cited by The New York Times.

Christian evangelist Franklin Graham told Judge Jeannine Pirro on Fox News that the coronavirus pandemic happened because the world "has turned its back on God."

"Well, I don't think it's God's plan for this to happen," Graham told Pirro after she asked Saturday why God would allow a pandemic to occur. "It's because of the sin that's in the world, judge. Man has turned his back on God, we have sinned against him and we need to ask for God's forgiveness. And that's what Easter is all about — it's about God so loving the world that he gave his only begotten son that whosoever believeth in him should not perish but should have everlasting life."

He added, "Jesus Christ came to save sinners. He didn't come to condemn the world but to save the world. And if we put our faith and trust in him, he'll forgive our sins. And he'll heal our hearts, and he'll change the course of our lives. And this pandemic — this is the result of a fallen world. A world that has turned its back on God. And so I would encourage people to pray, and let's ask God for help."

Pirro responded to Graham by remarking that "I don't think there is any question that this is giving people a tremendous opportunity to be somewhat introspective."

This is not the first time that the religious right has enmeshed its theological convictions with public discussion of the coronavirus pandemic. My Pillow CEO Mike Lindell aroused controversy last week when he remarked at a White House press briefing that "God gave us grace on Nov. 8, 2016, to change the course we were on. God had been taken out of our schools and lives. A nation had turned its back on God, and I encourage you to use this time at home to get back in the 'Word,' read our Bibles and spend time with our families."

The evangelical college Liberty University, which is run by Dr. Jerry Falwell Jr., was criticized for allowing students to return to campus after one of nearly a dozen students who exhibited symptoms consistent with COVID-19 tested positive for the virus, according to The New York Times. The student whose test came back positive lives off-campus.

Falwell previously expressed skepticism about the pandemic, telling Fox News last month that "it's just strange to me how so many are overreacting. The H1N1 virus of 2009 killed 17,000 people. It was the flu also, I think. And there was not the same hype. It was — you just didn't see it on the news 24/7."

He added, "And it makes you wonder if there's a political reason for that. It's, uh — you know, impeachment didn't work, and the Mueller report didn't work and Article 25 didn't work. So maybe now this is their next — their next attempt to get Trump."

Seventy-seven percent of white evangelicals expressed confidence in Trump's response to the coronavirus pandemic in a poll last month, with many evangelicals refusing to close down church services or abide by social distancing rules. Louisiana pastor Tony Spell held church services on Sunday in defiance of a stay-at-home order despite having been arrested on March 31 for violating the governor's order. He told his followers they had "nothing to fear but fear itself."

"He should have been warning us it was coming," Dr. William Haseltine, a biologist renowned for his work in confronting the HIV/AIDS epidemic, for fighting anthrax and for advancing our knowledge of the human genome, told Salon last month. "He should have been preparing by stockpiling all the necessary equipment. But even today we're not doing what we should do. Let me put it that way. What we should be doing is contact tracing [identifying people who may have come in contact with infected patients] and having mandatory quarantines for everybody who's been exposed. And quarantining not at home, but in hotel rooms, single occupancy hotel rooms."