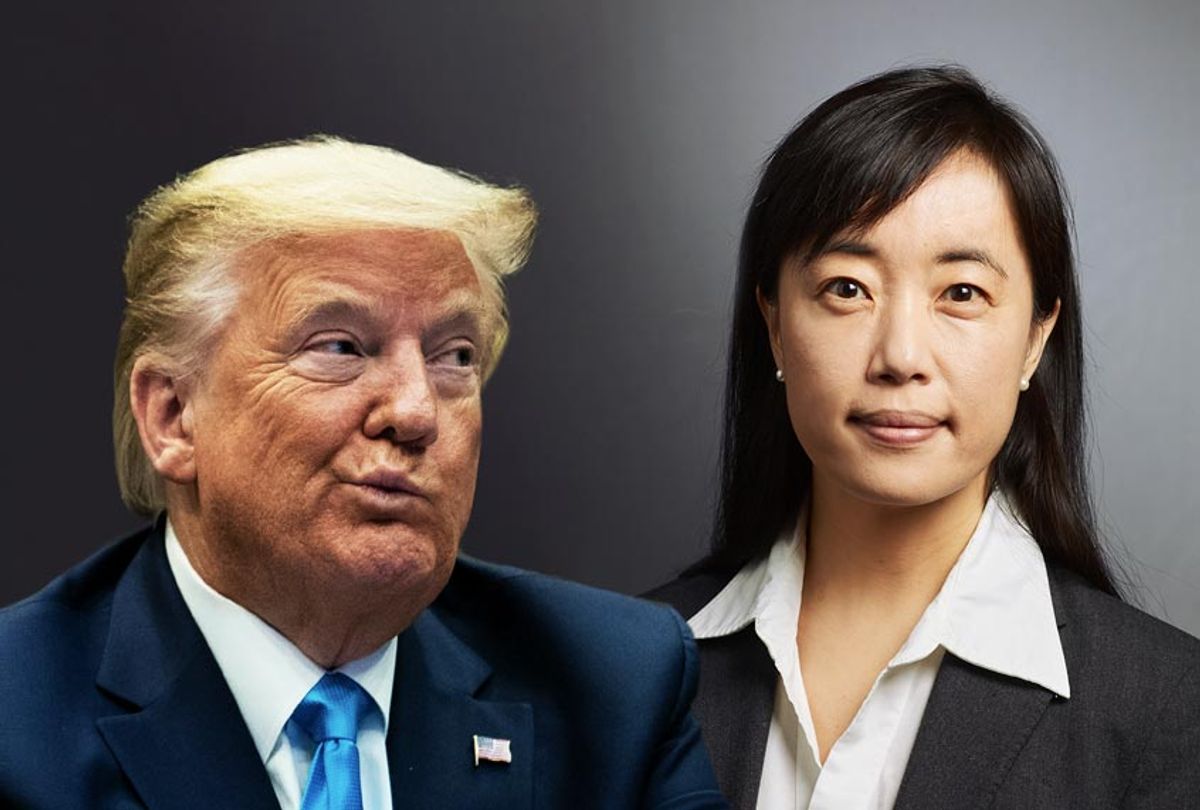 Dr. Lee, a forensic psychiatrist at the Yale School of Medicine who also teaches at Yale Law School, has sounded the alarm over Trump's mental health for years. Lee heads the World Mental Health Coalition, whose membership she says includes thousands of mental health professionals. The group has convened multiple panels to highlight concerns about the president's handling of the country and the coronavirus pandemic. The organization recently issued a "prescription for survival," calling for federal officials to take unprecedented action to block the president from leading public health policy during the crisis.

Lee, who authored the textbook "Violence," often focuses on the connection between human psychology, culture, and societal violence in her work.

"We are facing a democide of genocidal proportions, because we have handed power to someone who is anti-human in psychology," Lee told Salon. "The group he has isolated may not be ethnic, but it is his own cultural grouping of 'non-voters' or 'critics,' when he has withheld lifesaving equipment from states where governors have criticized him, such as New York, California, Washington or Michigan, while giving a surplus to states with sycophantic governors, such as Florida. When criminality combines with mental pathology, this kind of large-scale violence becomes possible. Eventually, it will be destructive to all."

Lee spoke to Salon about Trump's mental health, his daily coronavirus briefings and how the president's response will affect the general public. Her views represent only those of the World Mental Health Coalition, of which she is president.

There have been several recent op-eds calling attention to Trump's mental health, as you have done for years. Are they accurate?

Yes, I was both glad and sad to see them, for while they raise a critical issue, without expert input, underestimation and normalization are still the result. There were two articles in the New York Times, one describing pathological narcissism and the other sociopathy, both eloquent but with little understanding of these conditions. The earlier one calls mental health professionals merely "impassioned" — citing a political super PAC, when political activity actually forfeits professional status — while referencing attorney George Conway as the authority. The latter article did not seem to recognize that it was describing a mental health condition.

This is our predicament during a "death of expertise," as Tom Nichols names his book. I asked Conway repeatedly to defer to experts, as legal professionals and courts are exemplary at doing, but he cited neither me nor the book he extensively drew from for his article. Imagine if I were to take up a legal topic, studied it a fortnight, and called myself an expert. It does not work, since you have to have an appreciation of what the topic means in context. I would not dare do it without full training, even though I have been teaching at a law school for 17 years. To be able to diagnose a mental health condition, you have to know about neurology and physiology and all the other conditions that could go into a person looking that way. It is not as simple as a checklist. And diagnosis is not the point to begin with. Hence, while our country has some of the best mental health experts in the world, we are dying from a lack of access to that knowledge. Maybe the next book can be titled, "Death From Denial of Expertise."

Trump's coronavirus news briefings — unlike those of various governors around the country — have often contradicted top health experts. What do you make of Trump's insistence that he is right about everything and the experts are the ones who are wrong?

I think we can now accept how deadly his symptoms are, and that mental pathology is different from health. Any other presidential candidate from 2016, of either party — even Mike Pence — would not have had the same pathological malice against Barack Obama so as to dismantle a global pandemic response system that experts lauded throughout the world. Many of us mental health professionals did not even have to hear actual reports to know what was happening with the coronavirus: His psychology already spelled it out. From the loose travel bans and the untrained personnel handling early carriers, to the poor testing and tracing, to the failure to implement a Defense Production Act or to deliver existing medical supplies, we see no interest in containing the infection, as we expected. The same disinterest in the disease is behind his touting unproven medications and dismissing calls to issue a nationwide stay-at-home order or to advise people to wear masks. Experts only get in the way of his emotional needs.

This bottomless need to place his own psychic survival above any protection of the public should rather be a warning. This means he would be equally inclined to destroy the nation or the world — which he has the power to do — if he were to feel humiliated from the loss of an election, for example.

What does it tell you when top health experts like Dr. Anthony Fauci and Dr. Deborah Birx appear to placate Trump and avoid saying things that contradict him?

Poor Dr. Fauci has had to function as a psychiatrist and competing media personality at the same time as lead infectious disease expert! Dr. Birx I understand less, but one should not underestimate the power of mental pathology; even the soundest minds give in to the most bizarre delusions under its pressure. This is how untreated, severe pathology from the top spreads and exhausts you, which is why in psychiatric settings the treatment is removal: we hospitalize the patient so the family can improve.

There have been growing calls for news outlets to stop airing the president's briefings live. Do you support that? What effect do you think the briefings are having on the general public?

People once doubted whether the president's rhetoric, when he said things like, "These aren't people. These are animals" who "pour into and infest our country," would cost lives. Violence is harder to tell, being relatively rare, but his words certainly translated into deaths, since probability for an individual turns into a percentage for a population. The same is true here. We can be certain that he is causing deaths, and for something as widespread as the coronavirus, it will be a large number.

What should the public and lawmakers do if the president's words, as you say, cause deaths?

Listen to the experts! Mental health expertise is just as important as physical health expertise, if not more so, since a person's mental problems are inversely proportional to the willingness of the person to admit that there is a problem. So it is obvious where we stand as a society. Even those who recognize that the president has a mental problem do not think to say, "Let's call a doctor!" Like the coronavirus, the problem does not go away just because we avoid doing the testing.

What is important is prevention, as we have not seen the worst. Our "prescription for survival" lists all possible interventions. People feel needlessly helpless when there is a lot we can do: Citizens are mobilizing, even non-psychiatrist doctors. The 25th Amendment could be approached if overwhelming public opinion compelled it, and we have enormous data on presidential incapacity to educate about. A second impeachment would also be effective, with televised hearings on the president's handling of the coronavirus pandemic. We previously begged the speaker [Nancy Pelosi] to continue holding onto the articles of impeachment, as it was the one means we had of setting limits on the ballooned expectations from delaying impeachment for so long. Imagine what a different place we would be in if she had listened to us!

At a minimum, the House speaker could immediately establish an emergency crisis committee, calling on top CDC and Trump administration officials to answer all questions about the handling of the pandemic and what is being done to correct past errors. She would be demonstrating leadership in deferring to experts. With the information gathered over just a few days, the Congress can then assume its responsibilities in this dire emergency and not simply respond to the whims of a president whose briefings are nothing short of deadly.