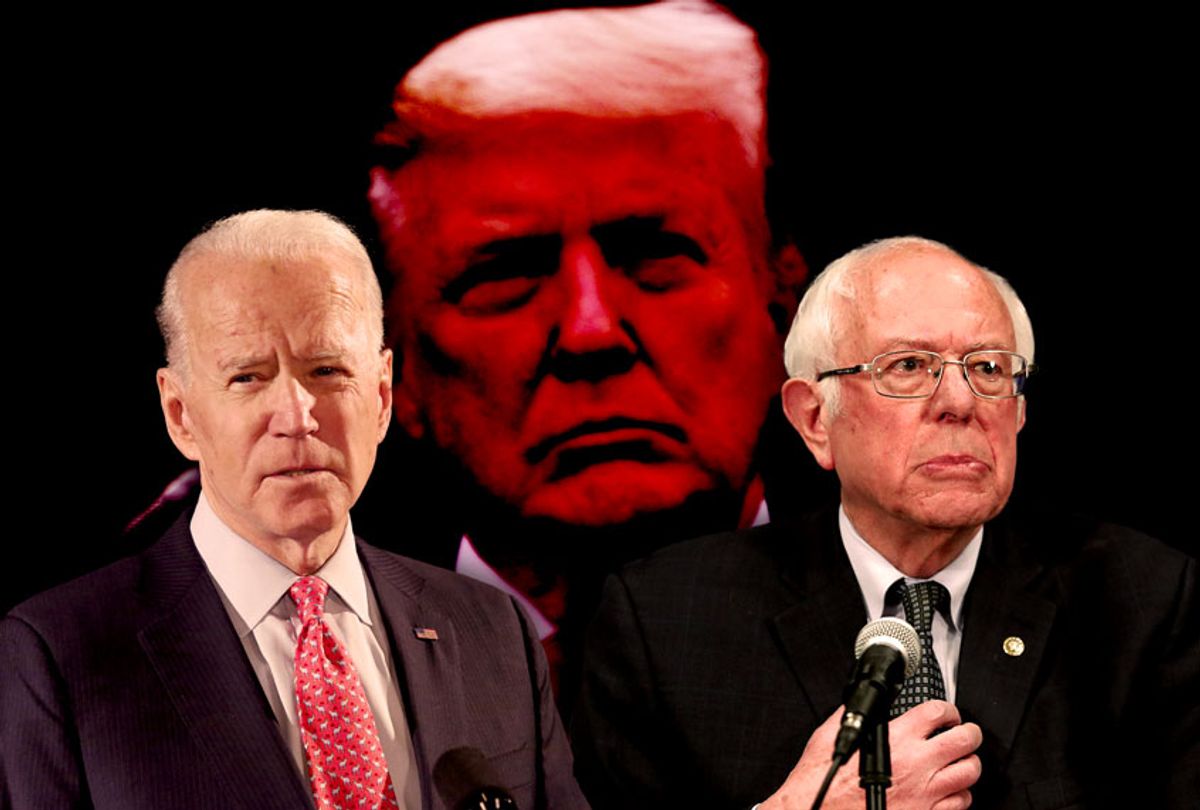 I wish I could take more pleasure in the I-told-you-so. Throughout 2019, I wrote a series of articles warning that whoever the Democratic nominee turned out to be, Donald Trump would attack them from the left — with an eye towards creating division among potential Democratic voters and driving down voter turnout — and that former Vice President Joe Biden was uniquely vulnerable to this tactic.

The response I got was largely a bunch of scoffing. How could a Republican like Trump attack Biden — or Sen. Bernie Sanders or Sen. Elizabeth Warren or any potential Democratic nominee — from the left? He's to their right! No one will fall for that, people told me, confident in their belief that it was un-possible for Trump to be shameless enough to argue that one should throw the election to him in order to advance progressive goals, or that anyone on the left would be stupid enough to fall for that tactic. I got into a series of frustrating social media arguments with people, mostly older men, talking at me like I was a silly child for even imagining such a thing was possible.

Well, here we are in April 2020. Sanders, the last Democratic candidate standing against Biden in the primary, has dropped out, leaving Biden as the presumptive Democratic nominee. And literally within minutes of Sanders announcing he would end his presidential bid, Trump started to attack Biden from the left and appeal to Sanders voters to vote for him to punish the Democrats for not going with their preferred nominee.

Bernie Sanders is OUT! Thank you to Elizabeth Warren. If not for her, Bernie would have won almost every state on Super Tuesday! This ended just like the Democrats & the DNC wanted, same as the Crooked Hillary fiasco. The Bernie people should come to the Republican Party, TRADE!

For good measure, the orange troll desecrating the Oval Office also tried to stoke hatred of Sanders among Biden voters, to maximize the internal strife on the left.

Wow, Bernie is unwilling to give up his delegates, and wants more of them! What's that all about?

But mostly his focus has been on pushing the narrative that Sanders supporters should vote for him — or vote third-party or stay at home, which is functionally the equivalent of voting for Trump — to spite the rest of the Democratic voters who wouldn't let Sanders have the nomination.

On Wednesday, during the daily Trump propaganda broadcast that disguised as a press briefing on the coronavirus pandemic, Trump did this conspiracy-theory thing, wondering out loud why "President Obama has not supported Sleepy Joe" and saying it must be because Obama "knows something that you don't know."

As Adam Serwer of the Atlantic astutely noted on Twitter, "The thing about Trump is that his manipulations are so obvious that the only reason almost anyone falls for them is because they want to."

Despite assurances that no one would fall for such blunt tactics, many on the ostensible left already are. Any quick perusal of Twitter shows it is awash in people, only some of whom are being paid by Russia, declaring that no true progressive should vote for Biden in 2020.

To be clear, most Sanders supporters will not fall for Trump's ridiculous trolling. But unfortunately, there's a robust minority who are eager to pick up what Trump is laying down. And while Sanders generally attracted a relatively diverse base of support, he also has a band of supporters — call them the B*rnie Br*s — who are privileged, white and either male or sexism-supportive women, and who are more focused on punishing the Democrats than they are on getting Trump out of office. No amount of denying that fact will make it go away.

That's why Trump ran with the theory that Warren had somehow undermined Sanders, an argument that has gotten cachet with the crowd that resents the Democrats for elevating the voices of women and people of color and views "socialism" as a cudgel they can use to bash that tendency while still claiming to be self-righteous. It's a crowd that's always eager to find a woman to blame, to bolster their belief that Democrats are losing their way by embracing "identity politics," i.e., a politics that prioritizes having a leadership that looks like the electorate, instead of a more paternalistic politics where white men lead and the rest of us follow.

Who is Trump speaking to? The hosts of the popular podcast Chapo Trap House, who reacted to Sanders dropping out by trashing Warren, attacking Sanders supporters who were seen as insufficient in their worshipfulness, and mocking people who are worried about Trump winning a second term. There's also the host of The Young Turks, Cenk Uygur, who, while saying he would do what it takes to get rid of Trump, declared that it would be "four years of darkness," regardless of whether Trump or Biden wins. And Hill TV host Krystal Ball, who blamed Democrats for the fact that Wisconsin's primary was allowed to go forward during the coronavirus, even though it was actually Democrats who tried to stop it. And Useful Idiots podcast host Katie Halper, who accused Biden of exploiting coronavirus to win (even though Biden had secured his unbeatable lead before the current crisis).

It's easy to say those people "only" have hundreds of thousands of followers. But that could be enough to swing what will surely be a tight election. Hillary Clinton lost to Trump in 2016 by fewer than 80,000 votes in three swing states. Considering that 1 in 10 Sanders primary voters in 2016 voted for Trump, there's a decent case that the spite vote helped Trump win that race. At least some people who attached themselves to the Sanders cause have influence that extends far beyond their immediate followers. They can help stoke conspiracy theories that spread far and wide, and have an impact that is hard to measure but could matter in swing states in 2020.

What's interesting is that Trump's pitch to these self-proclaimed "leftists" isn't really all that different from his pitch to his Republican base: Elect me to stick it to those libs you hate.

Since the Chapo/Turks/Idiots crowd are not sincerely interested in political progress, they were likely to take this approach with any Democratic nominee who wasn't Sanders. But for those who are authentic progressives, and aren't just wearing the "socialist" label as a kind of fashion statement that masks various unsavory attitudes, there's no reason to gulp down Trump's blatant provocations.

I'm not thrilled, personally, about Biden's nomination. I warned against nominating him because he's so easy for Trump to damage with these trolling attacks, after all. I am not enjoying saying that I told you so. Not one bit. But it would be foolish to sit out this election, and not just because getting the incompetent criminal out of the White House is an emergency.

For true progressives who care both about economic and social justice, there's a big reason to get excited about 2020: Down-ballot races. As Amanda Litman and Ross Morales Rocketto, the co-founders of Run for Something, argued in BuzzFeed last month, even if you hate the Democratic presidential nominee, by "directing your efforts to state and local elections, you'll help beat Trump, build sustainable power for Democrats, and, perhaps most importantly, start to feel good about politics again."

One doesn't have to love Joe Biden to realize that if there's any hope of a real economic recovery after this crisis, Democrats must win both the House and Senate in November in order to pass stimulus and relief legislation far more generous that anything the current Republican Senate majority will ever allow. Nor do you have to love Joe Biden to recognize that he'll sign any bill that a Democratic Congress passes. So, if folks are truly progressive, they will show up and try to make sure that Congress is as progressive as possible.

So this isn't just about not being dumb enough to fall for Trump's manipulations, though that should really be reason enough. By letting Trump or various pseudo-leftists delude you into not voting in 2020, you're depriving progressive state and local candidates of the support they need. Sanders' campaign slogan this year was "Not Me, Us." With his departure from the race, there's a chance for his supporters to show they really believe that.