In comedy-thriller "12 Hour Shift," blood and chaos reigns as a murderer terrorizes a hospital 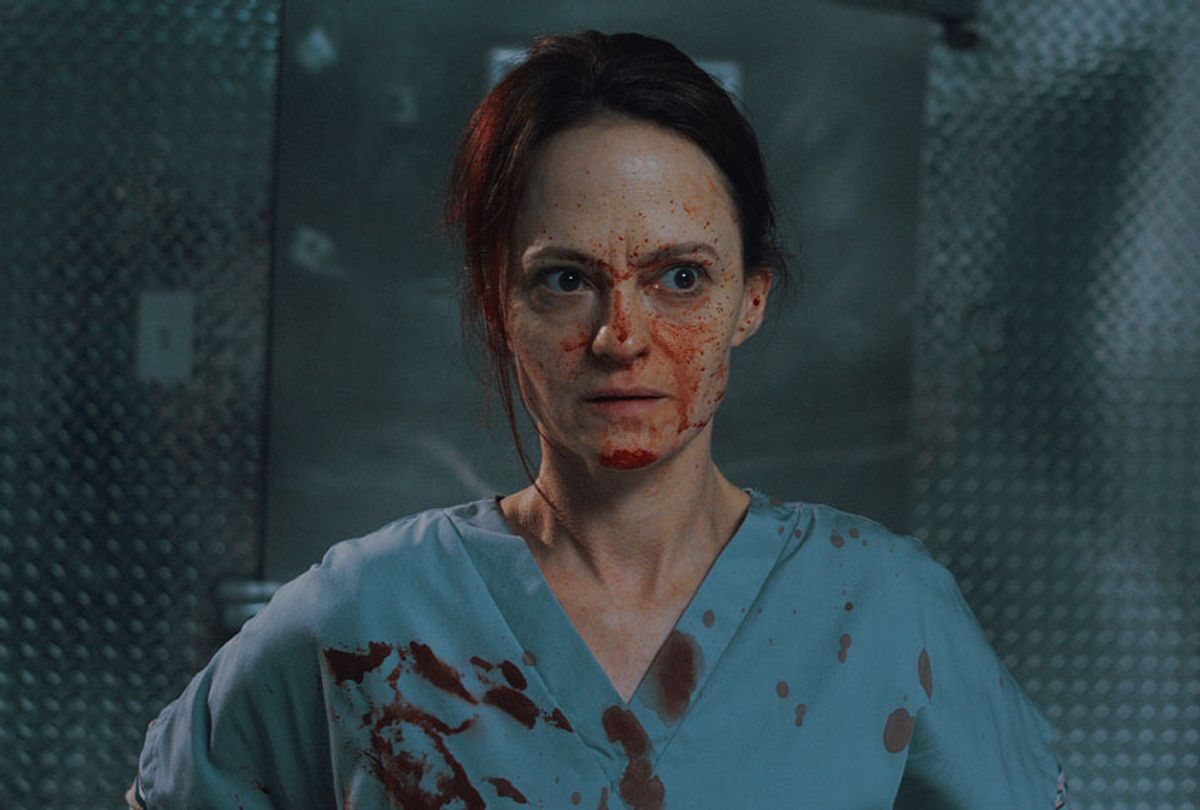 While nurses are braving the front lines of the COVID-19 pandemic, writer/director Brea Grant's Southern-fried black comedy "12 Hour Shift" shows nurses behaving badly. Mandy (Angela Bettis) is about to work a double at an Arkansas hospital in 1999. She uses her job as a means of getting drugs — she's a junkie — and as a way of securing "goods" for her side hustle selling organs on the black market.

When her irresponsible cousin Regina (Chloe Farnsworth) misplaces a kidney, Mandy is put in the unenviable position of securing another. Further complications arise when a murderer (David Arquette, who produced the film) is brought into the hospital, a storm shuts down the power, and bodies start piling up.

Grant's film, which was previously set to have its World Premiere at the Tribeca Film Festival before the coronavirus shut it down, is a fun, low-budget thriller that showcases a flinty performance by Bettis and just enough blood and chaos.

The filmmaker chatted via Skype about her dark sense of humor and her faith in humanity.

What inspired you to create a film that puts junkie nurses, organ thieves, hot cops, and a killer on release from jail in a hospital during a storm? Did this come from your personal experience?

I'm from East Texas, so I am inspired by the world of East Texas, which is a completely different universe than the rest of the word. I combined that with the claustrophobia of a hospital and my favorite urban legends from the 1990s.

There's a strong police presence in the film, and not just the hot cop (Kit Williamson of "Eastsiders" fame). Do you have any experiences with the law you care to share?

No. I don't. I have a lot of experience with nurses and hospitals. Being from a small town, you know some of the police, and people you went to high school with become police. And you never expect the smokers at school to suddenly become policemen! The goofiness of the policeman character comes from that — knowing someone who grew up and became a cop. As for Kit Williamson playing him, that character is so antithetical to what Kit usually plays. He's been one of my best friends for 10 years. He's also in my first movie, paying a goofy straight guy.

Can you talk about the way you create humor and tension in this environment?

Horror and comedy are different sides in the same coin. I have a background with horror and comedy, and they are both all about timing. I view this as a dark comedy but because I have a horror background, people want to think of it as a horror movie. Angela is a grounding force, and sarcastic. I created a slow, interesting pacing by putting extreme characters — who talk a mile a minute or have rattails down to their ass — around her. That way, I could have a film that walked the fine line between dark comedy and "What the hell is going on?"

How did you develop the sense of claustrophobia and the visual language of the film?

It's a real Arkansas hospital. That wing was about to be remodeled. It has had the same look since the '90s. We were able to use it, so our changes were to put up décor from thrift shops. We used the hospital machinery from the '90s. We shot in the same hallway[s] and used the same rooms. Matt Glass, the cinematographer, and I made sure each room had a "feel" — one is static for the characters to catch their breath, one dark, one calm, etc. but in the hallways, there was always movement.

What about the bloodletting and body count? Did you have a morality in mind regarding who gets hurt, how, and why?

I'm not sure there's a moral tale to be found at the end of this. It's all from Mandy's point of view. She helps people she loves, and people she likes get hurt, unfortunately. She's a steady rock — she has problems of her own, and she's teetering on the edge of losing it. But Regina is a chaos-maker. We had to show how dangerous Regina was and how far she would go.

I hated Regina's character. But that's what makes Chloe Farnsworth performance sooo good. I hated her!

Her audition tape was borderline scary. I was scared she'd be a complete nightmare. She's the sweetest woman, though. On set, all she wanted to do was hang out and help out. Her character had to lack self-awareness. As Regina, every time she had an idea, it was a surprise to her, and that's why it worked. She'd do something insane in the moment, and we all bought it.

I love how unflappable Mandy is, dealing with all kinds of crazy. How do you keep calm under pressure?

I don't know if I do. I deflect with humor. I do find I keep calm by making a lot of jokes. I have so many comedy bits happening in my house to deal with the chaos during COVID-19. When my other movie ["Lucky"] was canceled at SXSW, my class clown came out because in the midst of chaos and sadness the only way to deal with it is make jokes and eat lots of chocolate. Every day since the quarantine started, I've had a chocolate bar. I like Hu and Chocolove and Milkless. I love dark chocolate. There's a bean to bar chocolate revolution. They are $8 each and so worth it.

Speaking of COVID-19, although set in 1999, the film has some very timely pandemic connections from drinking bleach (which is not being advocated!) and a hospital in lockdown. Did you ever expect to be so prescient?

No. Who knew any of this could possibly happen?

David Arquette is fun as a criminal-murderer. How did he come on board to executive produce the film?

He and his wife Christina were on from the beginning. They worked with my producing team. He was going back and forth doing his professional wrestling. At one point he has to fly off a ledge in the film and he was great because he's a professional wrestler. One day he showed up with a donkey on set, and everyone took photos. He gets bonus points for making it fun.

I love Mandy's line, "Sometimes, I have too much faith in humanity." Do you really feel that way?

I do feel that way. I don't know if I like individual people very much most of the time, but I have a huge faith in humanity as a whole. I'm surprisingly an introvert and I don't trust everyone, but I have a big faith in what we can all achieve. I'm an optimist. I've been proud of certain things — being in California, and seeing what L.A .has done — but I see people protesting nurses and then I think: Am I wrong to have faith in humanity?