Beyond "Joy Luck Club": Tamlyn Tomita on "Asian Americans" and the power of immigrant storytelling

The actress narrates PBS' five-part docuseries about the experiences of those who made the U.S. what it is today 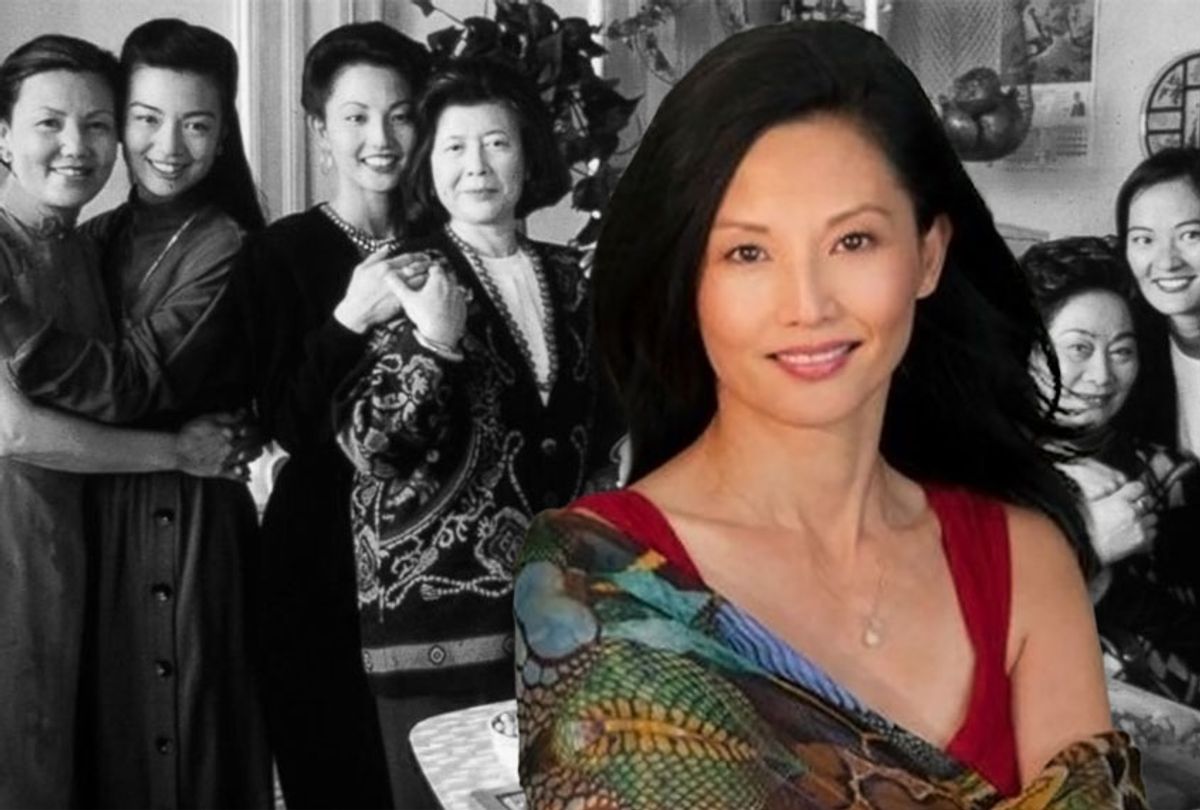 For actress Tamlyn Tomita, the impact of her 1993 film "The Joy Luck Club" wasn't solely due to it offering rarely seen Asian American onscreen representation from Chinese American writer Amy Tan, but also because it's an intergenerational immigrants tale that's relatable beyond race.

She sees this as part of the larger story that is at the crux of PBS' five-part docuseries "Asian Americans," about the experiences of these people throughout U.S. history, from their contributions and racist persecution, to their struggle for civil rights and rise in politics. Airing over two nights, Monday and Tuesday, May 11 & 12, the series is narrated by Tomita and Daniel Dae Kim.

"['The Joy Luck Club' is] from an American writer of Chinese heritage, and she presented a story that cut across generations of women, and it presented the battle of having one foot in American culture, society, background and the other foot that's aligned with her mother, who is from the other country, from China," Tomita said at the Television Critics Association press tour in January to promote "Asian Americans."

"It's the struggles of the communication between a child and his or her parent, but also the cultural arguments and discussions as to what is the right thing to do? How do we behave? What is the correct way to communicate my feelings, if I have that privilege of speaking those feelings at all?"

Although "Asian Americans" doesn't delve into more recent Hollywood representations, it does provide a more historical look at how Asian actors fared, including how they often lost out to more well-known actors in yellowface or whitewashed roles, and how they were limited in the roles offered. Although "brooding heartthrob" Sessue Hayakawa was a silent era sex symbol, his roles perpetuated the sneaky, untrustworthy stereotype. Similarly, Anna May Wong constantly struggled to land roles that weren't exoticized or sexualized or seen as compliant. And how she got passed over to play the lead Chinese character in "The Good Earth" because the studio cast Luise Rainer instead has become the stuff of legend that even Ryan Murphy took a stab at it.

A new wave of films and TV shows are combatting these long-ingrained stereotypes – partly because there are creatives of Asian descent behind the scenes, partly because the popularity of "Crazy Rich Asians" proved that a story about and starring Asian faces could make bank.

Now one can see Henry Golding as the humorous, romantic lead opposite Emilia Clarke, or John Cho as a father seeking the truth about his missing daughter on the big screen. On TV and streaming, acclaimed shows such as "Master of None" and "The Mindy Project" preceded "Killing Eve," PEN15," and most recently Kaling's Netflix hit "Never Have I Ever." Studios and networks are simply more open to casting Asian Americans in their own stories now, without fearing financial failure thanks to the commercial and critical success of films like "Crazy Rich Asians" and "The Farewell."

There's also another strategy at work when it comes to Hollywood's more recent interest in telling the Asian American story: novelty. In an industry where remakes, sequels, and adaptations of the same old story have been done to death, the long-ignored or erased stories about those of Asian heritage are getting attention.

"Our Asian American stories, our old stories, happen to be your new stories," observed Tomita. "You get a new set of glasses to see the world that we all inhabit . . . and I think what we find out is that the stories that you're seeing as immigrant stories are your grandparents' stories, are your great-grandparents' stories. You just happen to be separated from them a little bit or happen to be closer aligned with the background from which your forefathers and foremothers came. It's just all the same stories."

In a separate interview with Salon, Tomita shared her perspective on the historical dearth of onscreen representation, especially since the presence of Asian Americans dates back to the early 1820s with the Chinese coming over to first work in the California gold mines and later other labor jobs. "As a community, as a group of people as a society, Asian Americans have not always been visible, but we've always been present. That is what this documentary will hopefully allow those doors to be opened," she said.

Tomita is part Japanese – from a second generation nisei on her father's side – and half Okinawan-Filipina on her mother's side. Even before the actress' experiences in Hollywood, she was aware of Asian American onscreen representation (or the lack of) early on because of how many immigrants learn English.

"My mother is Okinawan-Filipina, so when she came [to the United States] with me, a babe in arms, we were learning English together and watching television together," said Tomita. "When [Asian and Asian American actors] would pop up, my mom would wake me up so she could watch it with me. She'd recognize Nancy Kwan, Miyoshi Umeki, Yuki Shimoda. The old actors from Sessue Hayakwa and Toshiro Mifune from 'Midway' because those were the only times when we'd see faces like that. I've always grown up with those kinds of images because they were important to my mom and me.

"But then, it's just normal that I also looked to Susan Day on 'The Partridge Family.' Barbara Feldon on 'Get Smart,' I wanted to be her. Marlo Thomas in 'That Girl.' I felt she looked a little like me with the eyeliner, the dark hair, the hairbands."

Over the course of her career, Tomita redefined what it meant to be "that girl," beginning with her debut as Kumiko in the big-screen '80s film "The Karate Kid: Part II." Since then, she's played a wide range of roles, many of which are on TV, from an angry teenager on "Santa Barbara" to her current roles as hospital board chairperson on "The Good Doctor" and a seemingly Vulcan Starfleet officer on "Star Trek: Picard."

Through it all, she's also appeared in a number of projects that deal with war, starting over in America, and trauma –  that are often tied to the Asian American experience. Besides "The Joy Luck Club," she's also appeared in various projects addressing with the aftermath of the Vietnam War, and only just recently wrapped the alternate WWII history series "The Man in the High Castle."

"Growing up with my mother who grew up during World War II being half Filipina, half Okinawan, and literally running around the jungles in the Philippines escaping Japanese military chasing after them – I grew up with what they deem now as trauma, generational trauma," said Tomita. "So when I enter a project like 'Vietnam, Texas' or before that 'Tour of Duty' . . . there's differences that I honor, but also there are these similarities. We as Asian Americans have specific experiences where we can speak from: me particularly the Japanese American internment camp experience; you, the Vietnamese refugee experience or the new wave of Vietnamese nationals coming in in the '70s."

Although PBS has featured a number of more focused documentary projects that addressed the Chinese Exclusion Act immigration ban, Japanese American internment, and the Vietnam War in the past, "Asian Americans" gives much more context to how all of these diverse communities and more are connected. These people – who have been lumped under one socially constructed label – have helped to create the United States that we know today, and yet are constantly being treated as foreigners and interlopers and attacked as less than human.

The docuseries also unravels the myth of the model minority and drives home how immigration and being seen as "Other" are ongoing Asian American issues. Chinese Americans were the original illegal immigrants after the passing of the Chinese Exclusion Act and suffered persecution, job loss, and many were even massacred as a result.

And of course, the ICE detention centers – where families are separated and then placed in appalling conditions behind fences and barbed wire – is an all-too-familiar experience for Japanese Americans. Tomita's father and family members had been incarcerated at the Manzanar internment camp during World War II, and the actress herself narrated the second episode of "Asian Americans" titled "A Question of Loyalty" about that dark chapter in American history. It gives her a particular stake in how these ICE detainees are being treated today.

"[There are] illogical defenses and arguments for the detention, but we know deep in our hearts it's not the right thing to do," she said. "They're just trying to find excuses and reasons to justify such an inhumane act. It's against humanity."

The series also reveals how musician Tereza Lee, who is of South Korean descent, inspired the DREAM Act.

"The first DREAMer was a Korean American. I did not know that. How mind-blowing is that?" said Tomita. "How can you label a whole swath of people who just want to do better by themselves, by their family? They're dreaming for a better world. Why can't you dream together with them?"

Tomita, who leans left on the political spectrum, grew up in a household that had always discussed such issues, even if not everyone agreed on them.

"For my father's family, politics had always been discussed around the dining room table. It would get very, very heated," she said. "There were discussions about the Nixon era, there was discussion about redress and reparations. There were discussions about McGovern. So we grew up aware politically in discussing what it means to be active in our political process. My family is equally divided, left and right. And so we come into conversations as to what it means to do the right thing."

However one decides to align themselves politically, Tomita emphasizes how proper representation – in storytelling, in casting, and in series like "Asian Americans" – can only help inform and hopefully not allow yesterday's injustices to play out again today.

"I don't think as a society, as a nation we would ever wear swastikas openly again, but aligning ourselves with the kind of rhetoric or the the the kind of language that's being used and ascribed to certain groups of people or certain religions can be repeated," she said. "So we have to become aware of what we've done, what our histories are, in order to not repeat it. We have to constantly tell these stories and tell a wider swath of stories because you'll see that we're much more connected than separated. We're more brothers and sisters than others or foreigners or the perpetual outsider.

"That's the power of storytelling. If people try to diminish that and say, 'Oh, it's just a movie or it's just a TV show. But we're still talking about Susan Day in 'Partridge Family.' She impacted me, and that's the legacy of what storytellers do."